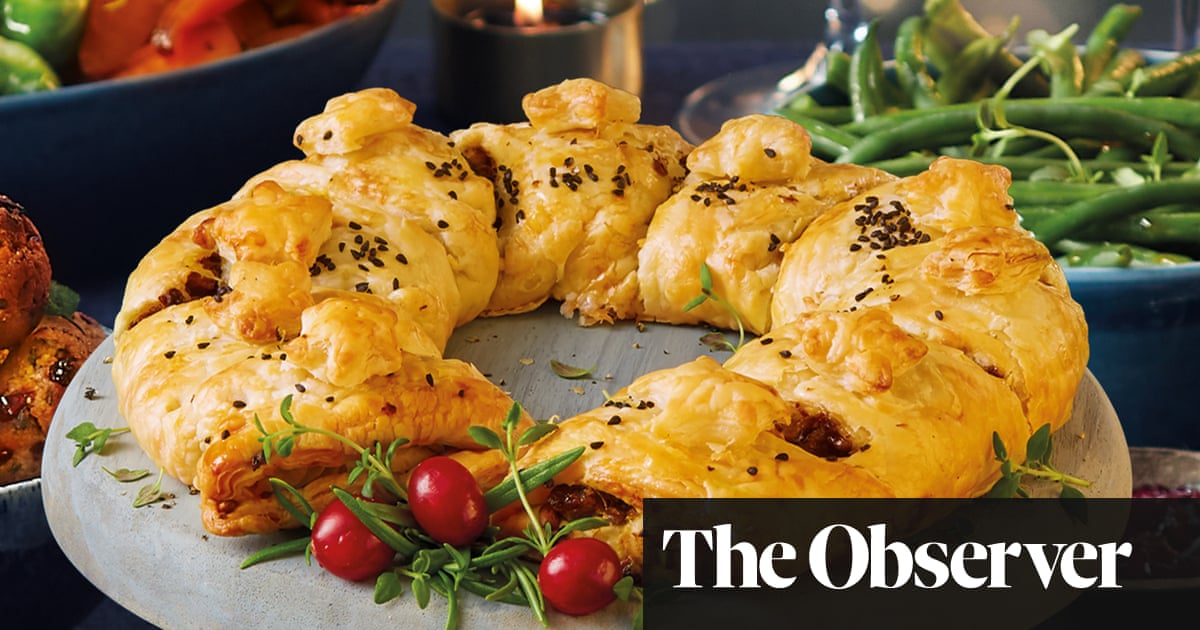 When Tony Bishop-Weston turned vegan 25 years ago, Christmas dinner was a challenge. “I thought I’d do a moussaka, as there were 14 of us,” he said. “I got the last aubergine in the village – there was only one. And that was a bit wrinkly.”

Everything has changed since then, especially this year, thanks to the flexitarian boom. Vegans who once relied on ingenuity and Linda McCartney’s sausages can now pick from a cornucopia of Christmas treats, because half the UK population is cutting back on meat or giving it up, according to market analysts Mintel.

Supermarkets have responded by boosting their plant-based ranges for Christmas. In 2018, Morrisons sold eight Christmas vegan items – now it offers 45, with three centrepieces, including a layered vegetable tart and a creamy mushroom Wellington.

Waitrose has doubled its Christmas range from six to 12 products, adding the “root en croute” – a confection of roasted carrots – to the “beet” Wellington that was so popular last Christmas that it became a year-round line. Tesco sells six vegan centrepieces, up from four, including a sweet potato and red cabbage Christmas log, and its Christmas report says that a third of families will have some sort of vegetarian or vegan option this year.Marks & Spencer says there has been a “considerable increase” in its vegan Christmas offerings this year, and Aldi has a large range of vegan party food, crowned by a Christmas pastry wreath filled with chestnut mushrooms and butternut squash.

A year ago, the only option in Iceland was a less than festive “no turkey” meal for one, but now it offers five vegan lines, including the “no moo chocolate snowflakes” mousse, caramel and biscuit dessert.

“It’s just been amazing. There’s anything you can think of,” said Bishop-Weston, reeling off a list of vegan “cheeses” available – gorgonzola, goat’s cheese, brie and camembert – that have nothing to do with goats, sheep or cows.

“I’m really struggling to find anything to moan about now,” joked the vegan chef and cookery writer. “There’s five blue cheeses. A guy in France is making smoked salmon with pea protein and algae – Odontella. It’s got the same mouthfeel, the same flavours – it’s amazing.”

It has been an extraordinary year for veganism, which has seen “an explosion in attention”, according to Ryan Whittaker, consumer analyst at GlobalData. “Waterstones has 3,545 book titles with the word ‘vegan’ in them available for sale, as of October 2019, compared with 944 in August 2018,” he said.

That attention from consumers has been followed by retailers. In the first 11 months of the year, the Vegan Society registered 14,262 new products under its Vegan Trademark scheme, twice as many as last year and a huge rise compared with the 5,919 that came out in 2015.

In fact, 24% of all food products launched in 2019 in the UK have claimed to be vegan, according to Edward Bergen, global food and drink analyst at Mintel, the market research firm. It’s a huge jump on the 8% of launches in 2015, and more than anywhere else in the world.

“This whole trend isn’t about the vegans, although they’re loving the journey,” Bergen said. “It’s about the consumers reducing the amount of meat they eat.”

It’s likely that more people will swap meat canapés for things such as M&S’s No-Pork Pigs in Duvets, or add a vegan option alongside meat at large gatherings.

“In a best-case scenario, it would be good to cook food from scratch, but the increasing numbers of vegan products available makes it easier for people to make vegan choices on Christmas Day,” said Heather Russell, a dietitian for the Vegan Society.

People who do want to cook from scratch their vegan Christmas dinner should think about colour, according to Bishop-Weston. “I like to do individual centrepieces because, no matter how beautiful you make it in the middle of the table, once you start cutting into it, it’s difficult to still be beautiful on the plate,” he said.

“You can make a little cracker out of filo pastry and you put some holly leaf and cranberries on top, and you tie the cracker with chives or slices of leaf.

“But if I’m doing a big centrepiece, I often do a pie or Wellington and try to make it pretty by putting layers in, something like kale and cranberry or red cabbage. You’ve got those Christmas colours coming through, so, when you slice it, it’s still looking pretty on the plate.”

Heppi
Vegan BBQ ribs made from peas
Available in 2020

6 of the biggest celebrity chef scandals of all time – Insider