When Karina and Edwin Castellano moved from Venezuela to the United States in 1999, Karina says they didn’t meet any Venezuelans in their new North Texas home.

Of course, that’s changed in the 20 years since they left South America. The collapse of Venezuela’s economy has sent millions of Venezuelans into other countries, including the United States, following food shortages, escalating crime and plummeting health conditions. Nearly 30,000 Venezuelans sought refuge in the U.S. in 2017 and again in 2018, according to the Department of Homeland Security.

Today, the Castellano family has more and more Venezuelan neighbors and friends. Their new restaurant, Mango’s Grill, is meant to serve Venezuelans looking for a taste of home as well as Americans interested in trying food that’s becoming easier to find in North Texas as the Venezuelan population increases. 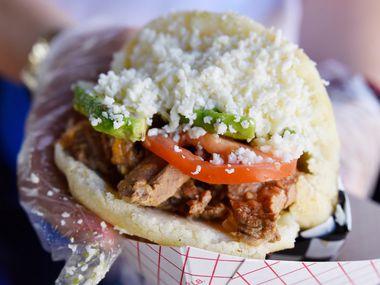 “This is a miracle,” Karina says of the restaurant, which opened in Haltom City on Dec. 7.

“I always wanted a restaurant, but I didn’t know what I was asking God for.”

Over the years, she talked to her kids and husband about opening a restaurant. But other jobs were more practical, like middle-of-the-night cleaning shifts and home remodeling jobs that paid the bills in their early years. “It’s been really hard for us,” Karina says.

“But I wouldn’t change my life. The process — the struggle — has been good.”

Twenty years in, the family had saved enough money to open a restaurant. They decided to name it Mango’s Grill.

“In every house in Venezuela, every kid goes to the backyard and picks a mango,” Karina says. “They’re everywhere.”

Some of the first customers at Mango’s Grill were members of their church. The symbolism is impossible to miss: Karina and Edwin met at church in Venezuela. They then worked at a Christian church when they moved to the United States. They have remained active in churches over the years, most recently as volunteers who cook food for homeless people.

“This restaurant is a testimony,” Karina says.

How Foodetective aims to de-clutter the restaurant payments market – PaymentsSource