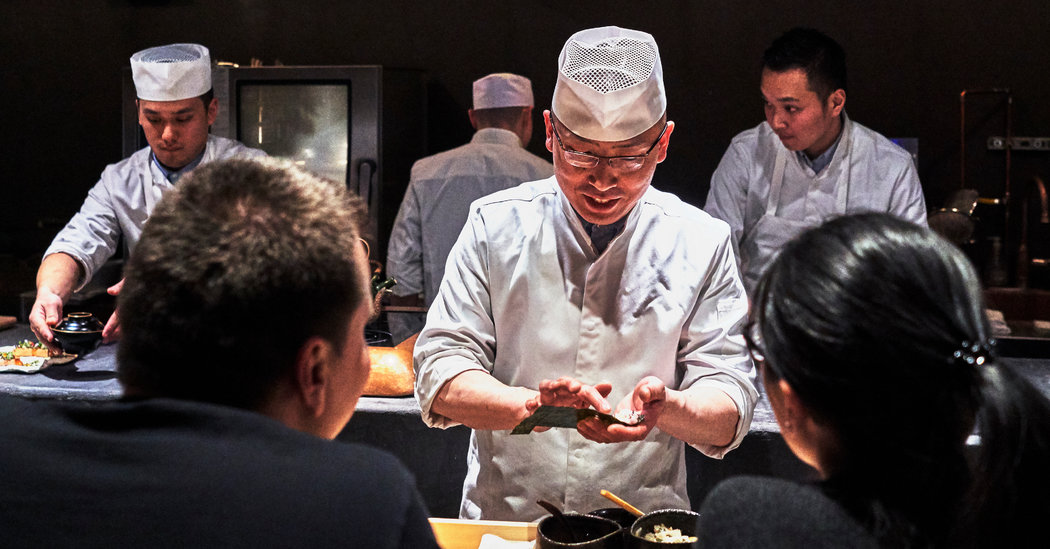 It’s true, I couldn’t figure out how to allocate stars to the labyrinth of Spanish restaurants, bars, cafes, kiosks and shops that the chef José Andrés presides over in the Hudson Yards complex. But putting it in the No. 1 slot for the year isn’t a close call. Not that Mercado Little Spain is without flaws. It has its share, starting with a name that’s too long. But it has made the city’s Spanish food scene, what, five times better? Ten times? Mercado Little Spain gives us ingredients we’ve never tasted in New York before, like weeks-old Ibérico pigs slowly melted over fire, or imported rabbit — so flavorful that nobody will say it tastes like chicken — in the Valencian paella cooked over burning logs. It also sells high-fidelity transcriptions of dishes from the chefs Ferran Adrià, whose liquid olives are still blowing minds, and his brother, Albert, who fed recipes to the outstanding pastry department. Somehow, though, the most impressive foods are the most elementary: the gazpacho that shimmers with olive oil and sherry vinegar; the thick, dark hot chocolate that comes with churros just out of the fryer; the goblets of gin and tonics. These and other dishes are so much better than what we’re used to that Mercado Little Spain might as well be the only Spanish restaurant in New York.

Odo is not another one of those cloistered sushi counters, although at some point in one of its $200 tasting menus you do eat a few pieces of sushi, and they are exceptional. Hiroki Odo, one of the most skillful Japanese chefs in town, is giving the ancient tradition of kaiseki a modern, New York slant. He pries open the time-honored progression of courses to make space for inventions like a predessert cocktail shaken in front of you by the sommelier, Frank Cisneros, who picked up some of the more recondite skills of the Japanese cocktail bar when he worked in Tokyo. The drink he pours will probably be built around some fruit that is in season at the moment, and will be succeeded by something new at the end of the month, like the rest of the menu. Kaiseki in the United States has often come with a fetish for imported ingredients, but Mr. Odo works with local stuff, just as a kaiseki chef in Kyoto would. Most of the seafood is caught off the East Coast; ice cream is made with the lees from sake brewed in a converted Industry City warehouse in Brooklyn. When it’s time to leave, down a narrow hall and through a door that leads into an intimate, wood-clad bar, you’ll believe you’ve seen the future of Japanese cooking in New York.

Most of the press that Stefano Secchi, the chef, got when he opened this modest-looking trattoria was focused on his time cooking for Massimo Bottura, the cerebral experimentalist chef of Osteria Francescana in Modena, Italy. But what makes Rezdôra such a breath of fresh air, oddly enough, is the schooling in the pasta arts that Mr. Secchi received at a much more old-fashioned Modenese restaurant, Hosteria Giusti. He makes his pasta with discipline and serves it with obvious confidence that fresh dough, conscientiously rolled and shaped, doesn’t need bling to sparkle. The flying saucers of anolini, the dime-size hoops of tortellini, the uovo raviolo that bleeds egg yolk when you cut into it, the handmade maccheroni al pettine that are raked with a comb to etch sauce-hugging grooves and ridges — whether you’ve seen them before or not, each one has fresh power to impress. In the best Emilian tradition, antipasti revolve around cheese and cured pork, and the secondi are rich but not overly elaborate: a butter-basted sirloin, for instance, with a sauce of sweet red peppers. New York’s love of Italian food is eternal, but it needs to be revived once in a while with a jolt fresh from the source, and that is just what Rezdôra is.

Nikkei cuisine is supposed to be the idea at Llama San, but if you are expecting to eat the traditional food of the Japanese community in Peru, you’re going to be confused. Impressed, and probably very happy, but confused. Erik Ramirez, the chef, takes ideas from Japan and Peru and Mad Libs them into modern dishes of his own concoction. The flavors come at you from all directions. You expect citrus and chiles in hamachi tiradito, but probably not lemongrass, coconut and green tea, and while scallop ceviche is not exactly terra incognita, when was the last time you saw one in cherimoya juice? Or were served nigiri topped with duck breast slices seasoned with cilantro and warm banana? Cocktails are even more esoteric, and the wine list zooms out of South America for a tour of great coastal winemaking regions from Chile to New Zealand.

For years New York’s beleaguered pack of Chinese-food fanatics has lamented the shortage of the kind of skillfully made, artfully presented cooking that, as a rule, you can’t get unless you’re willing to pay for it. A few high-end misfires have raised our hopes, only to knock them down. But Hutong demonstrates what a serious Chinese kitchen (this one is led by Fei Wang) can do when it’s turned loose on great ingredients. An offshoot of a Hong Kong restaurant, it claims to specialize in northern Chinese cuisine, and while there are a few examples here and there, the chef is from Chengdu, and his Sichuan dishes are some of the most compelling things on the menu. Another strong suit is dim sum, made to order and available at all times, although the bench is deeper at lunch.

People have been hoping David Chang would open a straight-up Korean restaurant in New York for the better part of two decades, and now that he’s finally done it, none of them want to go. It’s worth it, though. Getting to Hudson Yards isn’t such an ordeal, and Eunjo Park’s menu fights the shopping mall’s big-box torpor every step of the way. The kimbap selection alone is more rewarding than the entire menu of most restaurants. And yes, H&M is downstairs, but here are some soy-marinated raw crab legs that make an immense impression even before you notice that they come with a bonus: The body of the crab is stuffed with creamy crab-roe rice. Along with this, you get a deep and idiosyncratic drinks list, state-of-the-art hospitality and shameless “I Love the ’80s” playlists — if she hung out at Kawi, Billie Eilish would know all about Van Halen.

When all your regular haunts start to look the same, a night at Cka Ka Qellu is in order. It’s a few steps away from Roberto’s and half a dozen other veal-Parm palaces lining Arthur Avenue in the Bronx, but step inside and you’re in an old village tavern somewhere in Albania or Kosovo. (The owner and his chef have connections on both sides of the border.) Maybe heads will turn when you enter, and you will smile. Take in the collection of musical instruments, farm tools, coffee mills and antique clothes on the wall. Smell the breads baking in the oven by the front door. Ask for some, with pickled peppers and two or three creamy dips to go with it, after which you might want some veal stew or yogurt-soaked veal dumplings in a clay dish. Of course, there will be sausages. Desserts are baked on site, too, like the nut-topped cookies called sheqerpare. Coffee is poured from long-handled copper pots. You might know this as Turkish coffee but, for as long as you stay at Cka Ka Qellu, you’ll call it Albanian.

Jonathan Benno’s curse is to be known as a chef’s chef, moderately recognized by the general public but deeply respected by his peers for his range and technique. The reasons for this flickered in and out of view when he was cooking at Lincoln Ristorante, but they are on full display at Benno. Just when you’ve decided you’ve never tasted a more beautifully seared duck breast, you notice that it was served beside a shatteringly thin envelope of savory pie, North African in inspiration, wonderful to eat and tricky to make. The kitchen’s salchows, lutzes and triple axels are matched by a classical sense of what tastes good with what. There are few revelations inside this windowless hotel dining room, but there are plenty of reminders of how many deep pleasures can be gotten from complicated, precise cooking.

Jenny Kwak began showing New Yorkers the pleasures of Korean cuisine before David Chang was old enough to drive. Explaining and gently adapting the cuisine that she grew up with, and that she cooked at her mother’s side in her first restaurant, Dok Suni, is still her superpower. With Haenyeo, on a fine corner site in Park Slope, Brooklyn, she leads her customers deeper into Korean seafood cookery than she has before. She wants them to churn spicy cod roe and sea urchin into the warm rice and tuna of Haenyeo’s hwe dup bap, and then to swab grilled oysters in melted seaweed butter. Still, some of the best moments happen when the restaurant goes off script, leaving fish behind to cook up an inspired Tex-Mex-ish queso fundido or a plate of beignets straight out of the French Quarter.

For the past few years, dark, rich and aromatic Tijuana-style beef birria has been the chief obsession of taco trackers in Los Angeles, who propelled Teddy’s Red Tacos and other purveyors into Instagram stardom. This year, birria fever rode into Queens on the wheels of a white truck called Birria-Landia. Rich from its blend of meat cuts, aromatic from cinnamon and other spices, tart from vinegar and deeply warming from dried toasted chiles, the truck’s birria is served on its own, as consomé; as a topping for a tostada; and as the filling in a mulita. But for most of the people who mill around the truck’s chosen corner in Jackson Heights, birria means tacos built on two consomé-dipped tortillas and a red blotch of fresh tomato-tomatillo salsa.

Customer leaves restaurant staff $1,000 tip to thank them for working through the pandemic – CNN

Foodie Culture as We Know It Is Over – The Atlantic