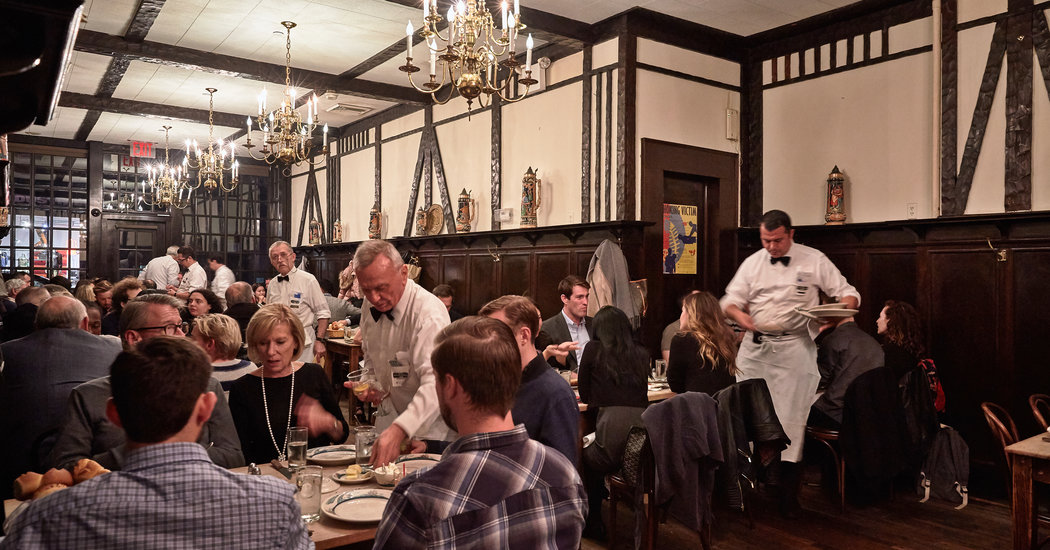 12. How Do the New Plant-Based Burgers Stack Up? We Taste-Tested Them

The Impossible Burger bested the competition in a blind tasting of six national brands. The taste test replicated the experience of a home cook: Each burger was seared in canola oil and served in a potato bun.

People complaining about the health implications of these burgers are missing the point. We (our global civilization) need a CRASH decarbonization in the next 15 years, just as huge swaths of humanity are entering the global middle-class and desiring ever-growing quantities of carbon-intensive meat. Maybe these aren’t any healthier than a fast food burger, but if they can replace those burgers (and chicken tenders, bacon strips, etc.) at a fraction of the carbon footprint, then these products have fulfilled their purpose. Harrison, United States

And she shares her opinions on pumpkin pie and canned cranberry sauce.

Our columnist pulled out all the stops for this nine-course dinner cooked in the kitchen of her Brooklyn apartment. Procrastinators, take note: Nothing gets done more than three days before the holiday in Ms. Roman’s house.

This is for the millions of people that struggle trying to prepare a traditional Thanksgiving dinner, for family and friends, helping them fight their way through logistical limitations. I really think that this is a great, inspiring piece for many of the readers. Mark Somerville, Mass.

10. Your Questions About Food and Climate Change, Answered

How to shop, cook and eat in a warming world.

In this collaboration between the Food and Climate desks, our reporters looked at the steps consumers can take with our food choices to combat climate change. Beef, lamb and cheese have a significantly bigger climate footprint than plant-based foods.

As a vegetarian, I had no idea that some cheeses have a higher environmental impact than pork and poultry! Now that I know, I’ll have less cheese. Farnaz, Orange County, Calif.

The Food editor’s Wednesday What to Cook newsletter always includes a “no-recipe recipe,” a narrative guide to a tasty dish. This feature, from March, compiled some of the greatest hits. “Cooking without recipes is a kitchen skill same as cutting vegetables into dice,” Mr. Sifton writes. “It’s a way to improve your confidence in the kitchen and to make the act of cooking fun when sometimes it seems like a chore.”

Maybe you don’t need a recipe, but you do need a plan. If I spent good money on red snapper then I sure as heck am gonna have something special planned for it. Kara, Potomac

See all the no-recipe recipes.

8. The Vegetarians Who Turned Into Butchers

They became butchers with the aim of revolutionizing the food system in America. Their shops, across the nation, sell meat from ethically raised animals.

Acceptance of death is a part of life. Something else has died for me to live, even if I’m a vegan. The best we can do it try to kill ethically — fast and as painlessly as possible. And eat ethically too — if we eat animals they should have been given a good and healthy life until that “one bad day” that they’re slaughtered. expat, US

7. Weeknight Dinner Around the World

For our weeknight cooking issue, 18 families on six continents opened their homes to The Times to show us how they cook and eat on a typical weeknight.

As a mom who cooks a family dinner 5 to 6 nights a week, I loved this article. It was so interesting to see all of the different meals around the world which were ultimately variations on the same thing. We are all so much more alike than we are different. BethNC, Wilmington

6. How to Boil the Perfect Egg

J. Kenji López-Alt tests his way to the best egg: perfectly peelable and tender throughout.

For his first column for The Times, Mr. López-Alt cooked 700 eggs — “the largest-ever double-blind egg-boiling-and-peeling experiment in the history of the universe” — to arrive at his preferred method for hard-boiled eggs. (It’s steaming.)

There needs to be a German word that expresses the satisfaction and the delight one experiences after a perfectly peeled egg. Seth Sadis, Ann Arbor, Mich.

Recipes: Perfectly Peelable Steam-Boiled Eggs | What to Do With All Those Boiled Eggs

5. The Aperol Spritz Is Not a Good Drink

The drinks writer Rebekah Peppler with a hot take on a popular summer cocktail.

The Aperol spritz — Aperol, Prosecco, soda water and a slice of orange — has long been a favorite aperitivo, but, she argues, a spritz needs the best possible ingredients. “If your finished drink tastes like a children’s vitamin, it’s wrong, and it’s a hangover biding its time.”

If you don’t want a spritz, just don’t have one! For the rest of us, it’s a tiny ray of sunshine in a deeply depressing world, and as so many here have mentioned, it also summons up that magical hour of the aperitivo in Italy! So leave us to our small pleasures! Ann Johns, Austin, Texas

4. The Secret Ingredient That Improves Meat Every Time

Mr. López-Alt on the wonder that is mayonnaise.

Sous-vide enthusiasts have known that adding some mayo to meat before searing improves the browning. But put that mayo in your meat marinade, and you’ll have a better sear in less time, with more marinade flavor sticking to the meat. Don’t knock it till you try it.

My God people are picky, finicky, just plain angry about almost anything these days. I hate mayo as well, but certainly gonna try this. I would love for steak or chicken to brown better. What is the big deal with trying something new or different? Why would I want to go through life without ever trying anything new? Dheep’ Midgard

In March, more than a year after reports that Mario Batali sexually assaulted and harassed women, the celebrity chef was bought out by his partners at the Batali & Bastianich Hospitality Group. In May, Mr. Batali pleaded not guilty to charges that he groped a woman in a bar in Boston.

There are many kitchens where this highly sexualized behavior and abuse are not the norm. I know because I carefully chose to work in kitchens with women chefs. And many of the high end kitchens work within an ethos of respect (like French Laundry). It can, and does happen. A Larson, Seattle

John Eligon on how black America has reacted to the popular sandwich.

The clamor for the sandwich led to very long lines. Our national correspondent reported that many African-Americans say Popeyes fried chicken reminds them of home cooking.

“It tastes like Louisiana. Louisiana is a melting pot of cultures and that is what this tastes like. I am glad that the rest of the country is seeing what the food in nearly every family is like, whether white, black or a combination of the two. … We don’t use food to divide us, in Louisiana, it unites us.” Mark, Baton Rouge, La.

Peter Luger Steak House in Williamsburg, Brooklyn, is known for its porterhouses, its curt wait staff and its sizable bills. Our restaurant critic found it has fallen in recent years. “After I’ve paid, there is the unshakable sense that I’ve been scammed,” he wrote. More than 2,000 readers chimed in.

I didn’t see this piece as a takedown but as a lament. A friend on Facebook slammed the review simply because Peter Luger is “an institution.” But institutions often rest on their laurels, get complacent, and take their reputation for granted. Sounds like this may have happened here. Wells wasn’t vague in his criticisms. He pointed to specific ways in which the quality of the food had declined, observed in multiple visits: uneven cooking, cold potatoes, the flavor of the meat. There was a note of sadness in this article that it looked like Peter Luger was past its prime. MsC, Weehawken, N.J.