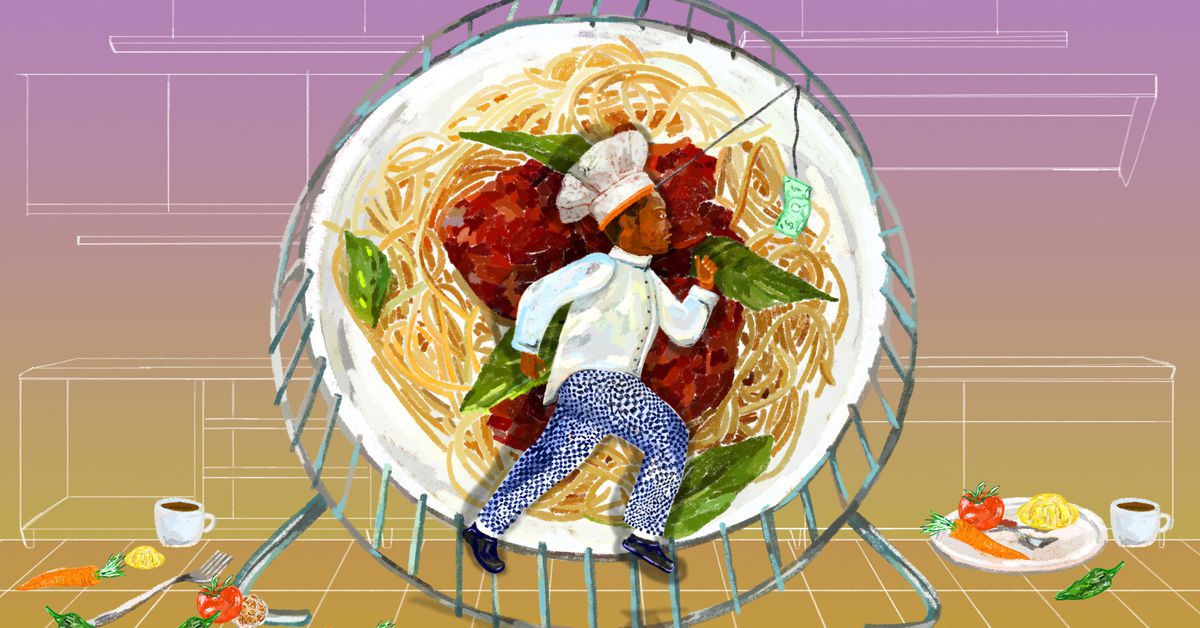 There was little pleasure for Valerie Biega in her pre-work coffee routine. The caffeine, rather, was what fueled her to push through each shift as a cook at a popular fried chicken restaurant in Brooklyn. After 10-plus hours — as many as 16 for the occasional double — of prepping and drowning chicken cuts in sputtering oil for a golden-brown crisp for tourists and hypebeasts alike while dodging coworkers on the tight line, she’d take two buses home to her apartment, finishing her day’s journey at around 1 a.m.

At $13 an hour for 45 to 55 hours a week, Biega didn’t have too much to show financially for her labor. She estimates that upward of 40 percent of her monthly income went to rent, another 20 percent each for her private health insurance and transportation, and another chunk covered her phone bill. (Paying off her culinary school debt would have to wait.) Even though her food costs were minimal, Biega says there wasn’t much she could afford to do aside from binge Netflix and recover until the work cycle began anew.

“It took a little while to realize that while I was doing what I wanted to do — cooking in the big city,” says Biega, now a sous chef in Toronto, “basically I was living to work.”

To a generation sold futures in hospitality via Top Chef’s endless culinary hurdles and Bobby Flay’s smug grin, Biega’s reality is an all-too-familiar truth: Cooks and chefs today grind their bodies and minds to ensure the comfort of others, but such work rarely provides the means to sustain their own lives. For many back-of-house staffers, the pains of long hours, paltry benefits, and paychecks sucked dry by the cost of living in cities with lauded restaurants are the industry norm.

More than a decade since the Great Recession, back-of-house jobs are still very much in demand. Thanks to a seemingly endless cycle of booming restaurant sales ($863 billion projected for 2019) spurring restaurant job growth (183,350 jobs were added between May 2017 and 2018, according to the Bureau of Labor Statistics), employment for cooks nationwide has recently reached an all-time high: over 2.4 million cooks, per the Bureau of Labor Statistics. The average annual wage for restaurant cooks increased nationally from $26,440 in 2017 to $27,580 in 2018, likely aided by competitive heat and new legislation guaranteeing $15 minimum wages. Head cooks and chefs enjoyed even greater average increases, up to $52,160 in 2018 from $49,650 in 2017, although their overall job numbers have declined by over 4.1 percent since 2016.

Despite these largely upward trajectories, cooks and chefs alike are struggling to keep afloat. Part of the problem is that real wage growth is flatlining, as it has for low-wage workers for several decades, according to the Pew Research Center. But Joshua Clark, an economist for the online real estate database company Zillow Group, says that a second contributing factor is skyrocketing housing costs, with rent inflation over the past decade outpacing wage growth. That crunch is especially hard-felt by those at the lower end of the wage scale, like cooks and chefs. And “there are no signs of that gap closing any time soon,” Clark says.

Based on U.S. Census Bureau American Community Survey data analyzed by Zillow Group for Eater, cooks, chefs, and head cooks making the median income for their metro area cannot afford to rent apartments on their own in approximately half of the cities across the U.S. Rents where cooks and chefs are working “are pushing them back further to places that don’t have hip new restaurants, that aren’t amenity rich,” Clark says, describing these communities as typically having lower rents. He adds that while commuting “you can listen to a podcast, but it’s still a grind.”

One of the more extreme cases of the industry rot driven by this high-rent, low-wage dynamic is the back-of-house staff flight from San Francisco. In October 2019, the median market-rate rent for a one-bedroom apartment was $3,550 a month, according to the rental platform Zumper, while the average annual income for a restaurant cook in the San Francisco metro area is $35,210, per the Bureau of Labor Statistics. Understandably, some chefs are fleeing their priced-out homes for cities like Sacramento, which is more affordable, at least for now.

That gap leaves many professionals gambling between bankruptcy and their livelihoods. Recent surveys found that more than 50 percent of New York chefs do not have paid time off or sick days, and only 31 percent of the 1,253 restaurants that participated in a nationwide survey offer employees health insurance. In her nine years of cooking, Biega could count only one job in the U.S., at a country club, where an employer paid for her health insurance.

“This is one of the industries where health care isn’t a priority,” says Biega, who has been diagnosed with ADHD and is waiting to be assessed for autism. “We don’t care if we’re sick and tired — that’s not even remotely a priority when you’re trying to pay rent.”

For those who do manage to break into kitchen managerial positions, the salary gains are significant. The culinary website Chef’s Pencil reported that for nearly the past two decades, the difference between the growth of average wages for cooks in restaurants and for chefs/head cooks widened, not unlike the gap between CEOs and typical workers. Between 2001 and 2018, the percentage difference has bloated from 57.7 percent to 89.1 percent.

As with CEOs, there’s a perception among restaurant owners that the supply pool for competent chefs de cuisine is slim, says Richie Nakano, founder of IDK Concepts in San Francisco, adding that “a lot of chefs, when they reach chef de cuisine level, can name their own price.”

Yet many sous chefs and head chefs say that their advanced salaries come at a cost. The physical demands of working the line do not completely end, and there’s increased responsibility alongside longer hours with no overtime pay.

“It’s our busy season and last week I put in 80 hours,” says Andy Hirth, a sous chef at the Lynnwood Convention Center in Washington, noting 50 to 60 hours is more typical. “Sometimes it’s a grind, and you know that as a cook when you’re done for the day, you’re done for the day. But as a chef, you’re constantly worried about every little thing.”

A handful of industry players are attempting to MacGyver higher wages for their back-of-house staff: Danny Meyer’s Union Square Hospitality Group introduced its “Hospitality Included” policy in 2015, which raised menu prices and eliminated tipping at several of its restaurants, enabling a 20 increase for back-of-house staff and benefits for all staff; Josh Lewin and Katrina Jazayeri eliminated tipping and introduced profit-sharing for all employees when they opened Juliet in Somerville, Massachusetts. But for the most part, the system persists, in the same way it has for decades.

It’s no surprise then that despite reports of a restaurant boom, many cooks and chefs are pursuing careers outside restaurants. Some cooks are delving into the private chef market, where the average annual salary is over $10,000 more than that of restaurant cooks, according to the Bureau of Labor Statistics. (Some organizations calculate the national average salary for private chefs to be much higher, at around $68,000 a year.) Many chefs, meanwhile, are moving into cooking within the corporate and private sectors, at casinos and hotels, where the median salaries for chefs and head cooks are over $7,000 to $11,000 higher than in restaurants, per the Bureau of Labor Statistics.

And then there are workers like Hanna Brotherhood, a former sous chef at the Upsider in Midtown Manhattan who, along with several of her former classmates from culinary school, is hanging up her whites for good.

Most recently, she’s found her workplace respite as a product manager at a cheese company in Brooklyn that delivers to restaurants around New York; her current salary is twice that of her last cooking job’s $600-a-week pay. When she visits restaurants for her current job, she doesn’t miss it.

“I love taking care of people and feeding people, but it never felt like I was doing that,” Brotherhood says. “It felt like you’d go in and make some stock and go home — for very little money.”

Matthew Sedacca is a writer living in Brooklyn.
Carolyn Figel is an illustrator and animator based in Brooklyn, New York.

If You’re In Italy Right Now, You Must Know These Restaurant Orders, 5 Ideas For You – IWMBuzz