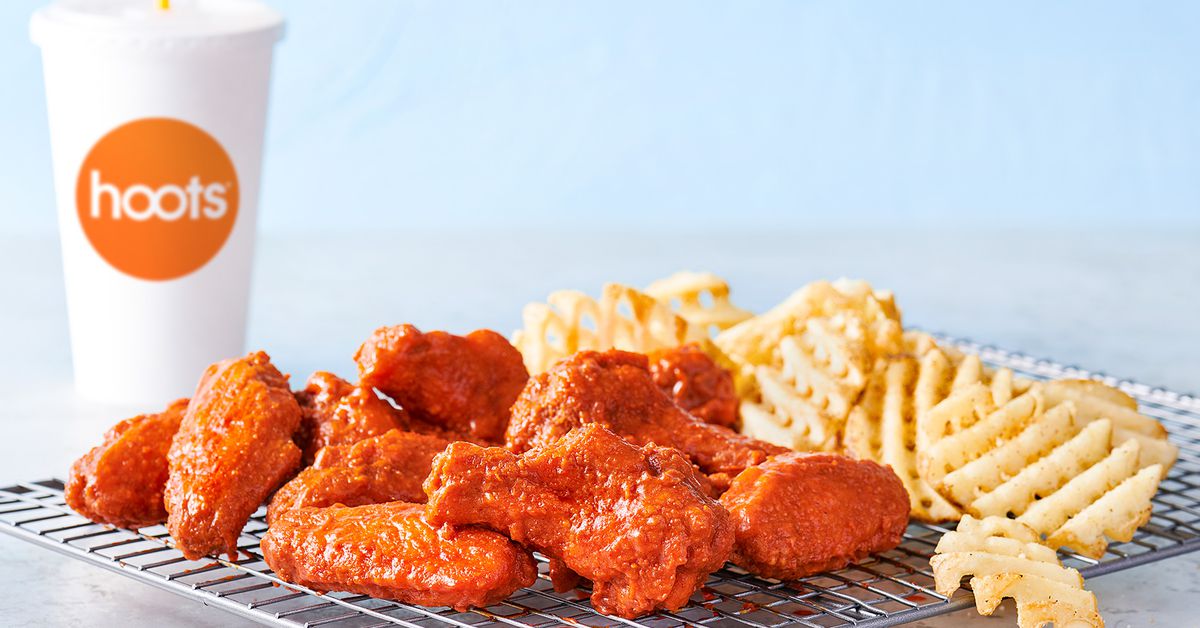 Hoots, the fast-casual sister chain to “delightfully tacky” breastaurant chain Hooters, has opened its first Chicago location on the outskirts of one of Chicago’s best restaurant neighborhoods, Logan Square. Called Hoots at the Field, it features some of the global company’s most popular menu items, namely chicken wings and snow crab legs — without minute orange shorts and shiny pantyhose. The new counter-service spot comes two years after the chain launched its first Illinois location in suburban Cicero.

In a notable turn from the well-endowed originals, Hoots employees — both men and women — wear khaki pants and black or orange branded v-neck or crew-neck shirts. “It’s a different concept but the same umbrella” as Hooters, said Hoots’s development and operations director Will LeBas. The company hopes to foster a neighborhood feeling by hiring local residents.

The food menu mostly features the chain’s classics, including buffalo chicken sandwiches, fried pickles, and tater tots, but there are a few new options. Customers can now try jumbo chicken tenders, available in sets of three, six, or nine, along with waffle fries and dipping sauces, according to LeBas, who added that there was vibrant in-house debate over whether to offer fries in waffle or curly form. LeBas recommends the “blue blaze” and “Thai ranch” dipping sauces for extra zing, and said he hopes to add more sauces and chicken rubs in the coming months.

The Logan Square location will offer a few bottled beers and canned wine options in the next few weeks, but will not have a full bar like the suburban Cicero restaurant. It will, however offer take out and third-party delivery.

The new orange and lime green-hued 1,930 square-foot restaurant seats 38 at tables and along two counter rails. It includes two kiosks where customers can expedite the ordering process or take extra time to peruse their options. It’s a feature likely familiar to fast food fans, one that McDonald’s debuted in River North in 2016, which many fear is designed to cut down the number of human employees. The Logan Square space is filled with windows, contributing to the “bright” atmosphere the company hopes to foster. Though it’s located close to the edge of the neighborhood, employees from the area near Kosciuszko Park see it as a Hermosa restaurant rather than Logan Square, LeBas said.

A South Loop Hoots is also in the works at 1238 S. Canal Street, LeBas said, and he’s gunning for a March opening. He isn’t ready to announce any other forthcoming locations, but is planning to open a Hoots in St. Petersburg, Florida, around late February. Founded in Clearwater, Florida in 1983, Hooters is now owned by two private equity firms, Nord Bay Capital and TriArtisan Capital Advisors, which together operate more than 430 restaurants and franchises around the world.

Hoots, the more palatable spinoff, is now open with wings and more in Logan Square.