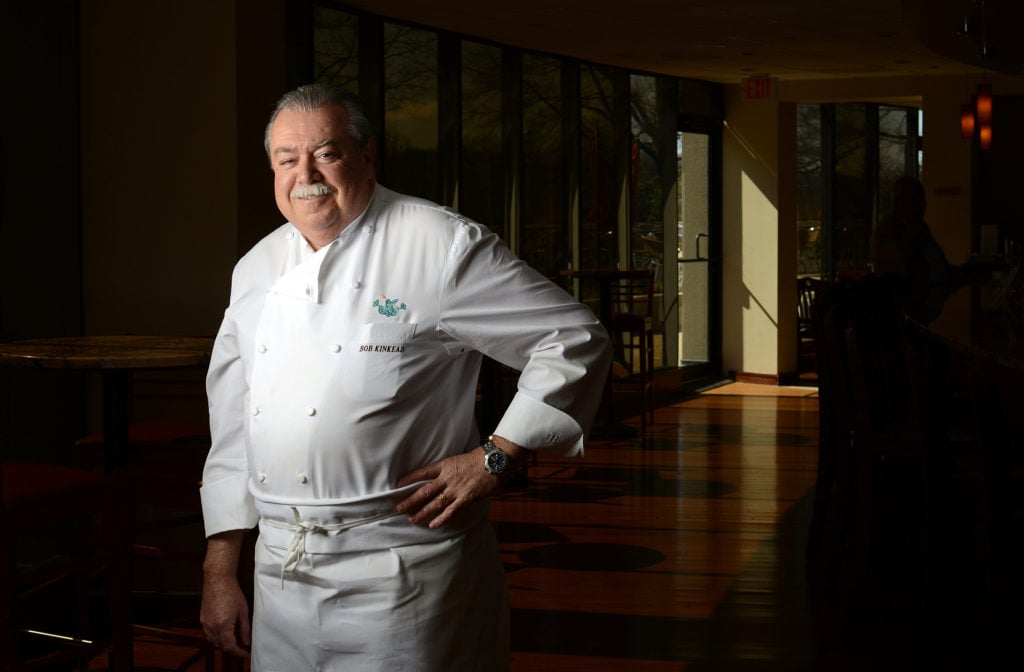 Chef Bob Kinkead, one of the pillars of DC’s modern dining scene, died Sunday after a long-term battle with heart disease and diabetes. He was 67.

Kinkead was known for pioneering New American cuisine in DC at a time when the city’s restaurant scene was dominated by fancy French and Italian restaurants. When he moved to DC from Nantucket in 1987 to open 21 Federal downtown—and, later, Kinkead’s in Foggy Bottom—he quickly reached star status for his inventive seafood menus, which drew flavors from around the world and highlighted lesser-known fish. He cooked for presidents and celebrities—Barbara Streisand once plugged his fried clams in the middle of a concert, his wife Dianne Kinkead says—and he earned a James Beard Award in 1995 for best chef in the Mid-Atlantic region. His impact continues to ripple across the dining scene through the countless chefs he mentored.

“He demanded perfection, and I think he was the most creative chef I ever worked with,” says BlackSalt chef Jeff Gaetjen, who worked with Kinkead for 24 years and considered him like a father. “He helped so many people with their careers.”

Lacoste says Kinkead taught her every flavor combination she knows and had a knack for drawing out others’ talent and creativity. When she left Kinkead’s, he shut down the restaurant to give her a going-away party. Little did they know President Bill Clinton was coming to dinner that night. “And so, it was this amazing event where the President was at my going-away party,” Lacoste says.

Fellow chefs remember Kinkead as gruff on the outside but warm and extremely generous to those he cared about. He’d yell if you messed up—”Give me that before I come to your house and burn it down!” Gaetjen recalls—but he would also go out of his way to lend support. When Gaetjen bought his first house, he says the chef helped him with the down payment. When the restaurant’s accountant got married, he helped cater the wedding. And when a pastry cook lost her child to cancer, he paid for the funeral.

“He was a curmudgeonly sweetheart,” says Lacoste. O’Grady calls him the “funniest, most serious person that I knew.” Even in his angriest moments, he somehow always managed to break it up with humor—”and it always saved the day.”

“I had so many people over the years say, ‘how can you work for him?’ and ‘he’s so mean.’ But he was never mean to anyone if he felt that you were giving it your all and that you cared about your job and the vision for food that he had,” O’Grady says. “He was just the most genuine, honest person, and he wore it on his sleeve.”

O’Grady met her husband working for Kinkead’s, and Kinkead gave her away at her wedding.

The oldest of 10 kids, Kinkead viewed his employees like family, especially during the holiday season. He hosted an “orphan Thanksgiving” for staff that didn’t have anywhere else to go. For Christmas, he held epic parties for his team, buying gifts for their kids, bringing in a band, and dressing up as Santa Claus.

In fact, his own grandkids called him “Grandpa Claus,” his wife Dianne says. “He was just a good person—obviously to me, very good to me. Very devoted to his family. Very devoted to my kids, who were his step-children, and grandchildren.”

Kinkead says her husband was modest about his awards and accomplishments—”I’m always the one who blabs about it,” she says. But he had a lot to be proud of: His legacy will include making quality seafood more accessible to Washingtonians. He brought the lobster roll to DC and had poke on the menu long before it was trendy. While other restaurants only served salmon and tuna and swordfish, he popularized underutilized “trash fish” like skate wing and monkfish.

“Any restaurant that you go into DC today—certainly around fish—you will see some element of him in it,” says O’Grady. “Until he started doing what he did, the only way to get fish dishes that were even close—which are not even close—was at the most high-end French restaurants in the city.”

Beyond his eponymous restaurant, which closed in 2012, Kinkead also operated restaurants in Annapolis, Vienna, and Boston at various points in time. In 2013, he opened the pop-up restaurant in the Watergate complex called Ancora, and then a wood-fired pizza spot Campono next door. He retired a few years ago to Pawleys Island, South Carolina, where he and his wife didn’t have to worry about snow and traffic.