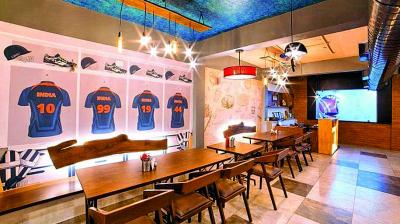 A restaurant in Puducherry celebrates the most loved sport of the country.

In French-steeped Pondicherry, there’s a touch of Italy now!

The biggest city of the erstwhile French colonial settlement, now officially known as the Union Territory of Puducherry, boasts of a cricket-themed restaurant serving Italian cuisine. Sauce and Toss is the brainchild of Paramguru and Sivaguru Perumal and their cousin Manoharan Taimanessamy.

Paramguru, speaking exclusively to DC from the restaurant, said the combination of the game and the cuisine was inspired by Virat Kohli, captain of the Indian cricket team, and actress Anushka Sharma choosing Italy for their destination wedding two years ago.

He explained that ‘Sauce’ is a reference to Italian food while ‘Toss’ is of course related to cricket.

“We prepare wood-fired pizza here and pasta is one of our main dishes,” says Paramguru, who completed his MBA recently.

The dishes may be Italian, but, in keeping with the cricket concept, the menu is cricket themed.

Cricket features heavily in the décor of the restaurant too. Famous cricketing quotes and visuals of the game’s highlights are emblazoned on the walls.

“We want our guests to fall in love with this game,” says Paramguru. “We have decorated the walls with Team India’s famous cricketing moments like the 2002 incident when Saurav Ganguly, the then captain of the team, took off his shirt to celebrate India’s victory against England in the NatWest Series at Lord’s, the iconic stadium in London, Dhoni’s 2011 World Cup victory and Rohit Sharma’s double hundred score”.

Diners can watch live telecasts of cricket matches while they eat at the restaurant.

Maybe an Indian cricketer or two will drop in at Sauce and Toss soon for a slice of the Chase Master, the Boom Boom, or maybe the Sultan of Multan!