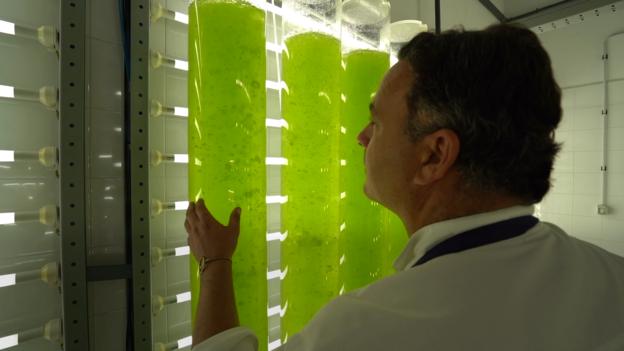 Chef Ángel León wants to change how people think about seafood, and by all accounts, he’s succeeding.

His three-Michelin-starred restaurant, Aponiente, has made waves around the world by using high-tech methods to creatively transform seemingly inedible parts of the ocean into masterfully crafted 20- and 22-course tasting menus that almost exclusively incorporate ingredients from the sea. Bread is made from scratch using seawater; discarded scraps from commercial fishermen are used to make seafood bourguignon and a charcuterie board; microscopic bright-green plankton are engineered into paella; and edible crustacean shells come swimming in bowls filled with stunning bioluminescent light produced by underwater organisms.

Located in an old tide mill just off the Guadalete river and marsh lands of El Puerto de Santa María in south-west Spain, the experimental restaurant relies on its surroundings for its unique ingredients. In a world of overfishing, climate fluctuation and endangered ecosystems, Aponiente’s mission is to promote sustainability while introducing diners to the ocean’s vast untapped resources.

As such, León turns to tossed out and overlooked “marine waste” and “humble products” like marine sugars and sea vegetables that largely go uncultivated to show how there is an entire culinary universe swimming in the ocean that people are unaware of. After being named the best chef in Spain by the Royal Academy of Gastronomy in 2014, León recently received the Michelin Guide Spain & Portugal 2020 Sustainability Award for his commitment to sustainable culinary practices.

With dishes that glow in the dark and courses that are are as visually stunning as they are appetizing, Aponiente’s immersive three-hour tasting menus are more than just dinner and a show; they’re a journey into unchartered culinary waters.

Viral: This weird pasta making hack will leave you disgusted! – Times of India

For this Alabama chef, James Beard nomination offers ‘a lot of hope’ – AL.com