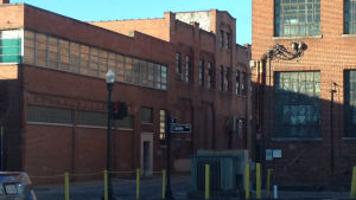 Bristolians used to flock to the sweet and savory scents of Hecht’s Bakery, which was nestled on the corner of Shelby and Seventh streets downtown. Much like the appeal of Blackbird Bakery, Hecht’s seemed to hold a special place in the hearts of local residents.

The owner, Herman Hecht, was born in Germany and immigrated to America at the young age of 18, according to a story from the late Bristol historian Bud Phillips as part of his Pioneers in Paradise series that ran in the Herald Courier. Hecht moved to Bristol in 1894 and spent some time as an apprentice at the Bristol Baking Co. in the old Anderson home.

Hecht left Bristol for a short while before returning in 1904, according to Phillips. In November 1905, he and his wife opened the original Hecht’s Bakery in a small space near Sixth Street.

The first day’s sales brought in a little less than $11. At that time, their bread sold for 5 cents a loaf or six loaves for a quarter retail and 3 1/2 cents wholesale. Deliveries were made by horse and wagon in the early days of the bakery.

Fifteen years later, the bakery was turning out more than 2,000 loaves per hour. The bread was hauled to several surrounding counties by three of nine trucks, according to Phillips.

The bakery continued to grow and in 1920, Hecht’s son, Armand, became part of the business. A larger building was constructed in 1922, but it was enlarged seven years later to accommodate the business’s continued growth.

The bakery won a national award from the Quality Bakers of America in 1932 for its “excellent quality and service to customers.”

The company was also a point of pride for workers during the Great Depression. Bristolian Joe Phipps told the Bristol Herald Courier in 2008 that he worked at the bakery as a teen. He was paid $12 per week at first, but his salary later dropped to $10, and he often worked 80-hour weeks when the bakery was busy.

“At that time, they didn’t have an hourly wage law. A day was a day,” Joe said. “Every day you went in, you had to fill certain orders. One day you might work 12 hours, the next day you’ll work 15 hours. You just worked as long as they wanted you to.”

By 1941, the Hechts hired Monroe Boston Strause, a well-known pie expert, who is credited with inventing the chiffon pie, according to Phillips. The pie business grew by leaps and bounds during his tenure.

Armand was promoted to manager of the bakery in 1948. Herman died in June of that year, but his legacy continued to leave a lasting impact on Bristol residents.

In 1965, the branding of the company’s well-known Sunbeam bread changed to “Hecht’s Purity Maid” bread. The bakery produced bread for grocery stores and supermarkets in Bristol, Roanoke and Johnson City.

And while people remember the fresh smell and tastes of the popular bakery, the company itself is long gone. The building still stands and is now the home of Bristol Products.

Go Vegetarian to Save our Planet, says David Attenborough – The Beet