It has been relatively easy for investors to earn positive returns in 2019. The broader stock market soared by over 27%, taking most industries — including restaurant stocks — higher along with it.

A few restaurant brands stood out from the rest with head-turning gains, though, and below we’ll look at the year’s biggest winners, as measured through Dec. 17. 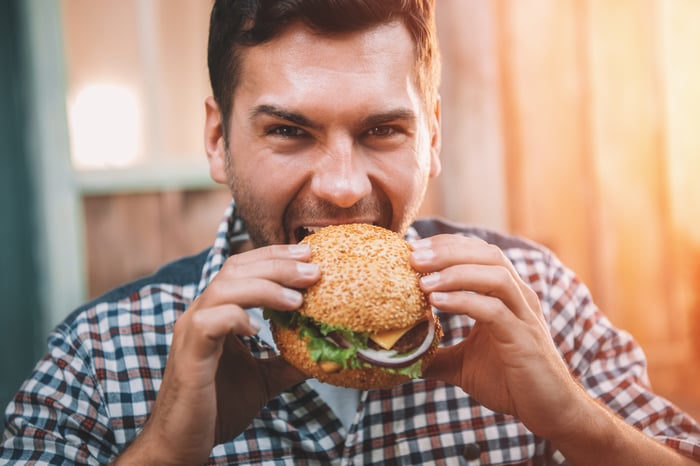 Restaurant Brands International (NYSE:QSR) has roughly matched the return of the S&P 500 at a time when rivals like McDonald’s faltered. A look at its last earnings reports helps explain that performance gap. The company enjoyed solid growth at Burger King in the third quarter and a multi-decade high for its Popeyes franchise. Those two wins helped offset sluggish results at its other major franchise, Tim Hortons.

The key test for Restaurant Brands stock will be whether the company can sustain momentum into 2020 as domestic fast-food rivals step up their innovative chicken sandwich and burger launches. Investors are also looking forward to the chain adding hundreds of Popeyes locations each year in China. Success both domestically and abroad would signal shareholders to expect another outperforming year ahead.

Shack Shack‘s (NYSE:SHAK) 30% gain in 2019 is impressive, but most investors would look at this rally as a disappointment given that shares had more than doubled by early September. The dramatic shift in sentiment in recent weeks occurred as sales growth stalled in the back half of the year, with customer traffic gains slowing to reverse the earlier acceleration.

CEO Randy Garutti and his team said the operating slump was caused by the “better burger” specialist’s shift to a national partnership with Grubhub. Yet it will be some time before investors know whether Shake Shack’s latest struggles are a sign of bigger competitive challenges ahead. Thus, the stock could see major volatility as its long-term growth path becomes clearer in 2020.

Investors have heard lots of good news from Starbucks (NASDAQ:SBUX) this year, and they’ve responded by pushing shares higher by nearly 40%. All its key growth levers are working today, resulting in positive customer traffic even as Dunkin’ Brands and McDonald’s struggle with persistent slumps. That U.S. success is bolstered by accelerating gains in China, too.

As a result, Starbucks in on pace to expand profitability this fiscal year after a rare decline last year. Shareholders are also excited to see booming capital returns, too: over $12 billion in stock buybacks in just the past year.

Wendy’s (NASDAQ:WEN) stock is up over 40% in 2019 thanks to its generally strong sales and earnings growth. Comparable-store sales are accelerating and margins are rising, which led to management raising its revenue and adjusted earnings outlooks in early November.

Looking further out, management has predicted that it can boost annual comps gains to between 4% and 5% while accelerating its expansion into Europe and other markets. Investors might punish the stock if the company falls short of either of those targets. But for now, it appears the fast-food specialist has the wind at its back.

Chipotle (NYSE:CMG) wins as this year’s dominant restaurant stock, with shares up more than 90% in 2019. That rally has been steady through the year, with investor enthusiasm jumping as far back as late July.

The burrito giant has put its past struggles firmly behind it, with comps accelerating into double-digit gains this past quarter. Customer traffic is booming, in part thanks to Chipotle’s unrivaled success in the digital and home delivery niches.

Wall Street is expecting those successes to carry that strong operating momentum into 2020, which should support the opening of as many as 165 new restaurants. The big test for that bright outlook comes in early February, when Chipotle is set to announce its 2019 results while issuing detailed guidance for the new year.