Legendary British designer Terence Conran has opened a restaurant in east London, where a menu of foraged food is complemented by natural tones and grassy installations.

The restaurant boasts a menu where every ingredient is sourced from the UK, and many are found growing wild around London.

Architects Fiona Kirkwood and Sophie McCarthy tried to match this in the feel of the interior, combining earthy clay tones with natural textiles and artworks that reference the natural world.

“We knew that head chef Richard McLellan would be working with local suppliers to source ingredients, and would incorporate an element of foraging and seasonality,” Kirkwood told Dezeen.

“Our design was to have a calm purity that wouldn’t distract from the plates of food.”

Located in the basement of the Boundary London hotel in Shoreditch, the space features high ceilings and a wall of impressive brick vaults.

It had previously served as a restaurant, so the architects were careful to preserve or repurpose anything they could, in order to keep the project within its strict £100,000 budget.

For instance, the old marble floor was retained, but large rugs sisal rugs were added to soften its impact.

“We were extremely mindful to adaptive reuse,” said Kirkwood. “Whilst it wasn’t the floor that would necessarily have been specified, we respected the quality and workmanship of it, so commissioned sisal rugs to integrate it with our new palettes.”

The biggest change to the space is a new 30-metre-long wall in front of the kitchen. A clay-plaster finish gives it an earthy appearance, whilst a bevelled opening to the kitchen gives a sense of thickness. 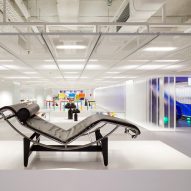 “This wall responded to the grandeur of the original structure and the monolithic materiality of its brickwork,” said Kirkwood.

“The finish of the clay plaster has had a magical effect on the space,” she added. “Visibly, it softens the room with its natural textural quality, and audibly it is quite absorbent, so a peaceful hush is achieved.”

The space is divided up into three zones: a bar area, the main dining room and a private dining area. Each one has as its focal point a sculpture made by floral design studio Worm.

Suspended from the ceiling, these combine tree branches found on Terence Conran’s home estate in Berkshire, Barton Court, with various grasses and wildflowers.

Underneath each of the sculptures is a feature table or seating element, designed to add emphasis. Banquette seating was custom made, while the ash wood tables are by designer Jan Hendzel and chairs were supplied by Carl Hansen & Son.

“For as long as I can remember, my time has been divided between London and various country homes, and that balance between urban and the countryside has provided a calming sense of harmony in my life,” added Terence Conran.

“I feel the interior of Wilder reflects this perfectly, a sense of the natural and organic in a powerful urban setting.”

Kirkwood McCarthy’s previous projects in London include a workshop transformed into a home and a zinc-clad house extension.

Photography is by Fergus Coyle.

How to compete against home bakery businesses – Restaurant Business Online