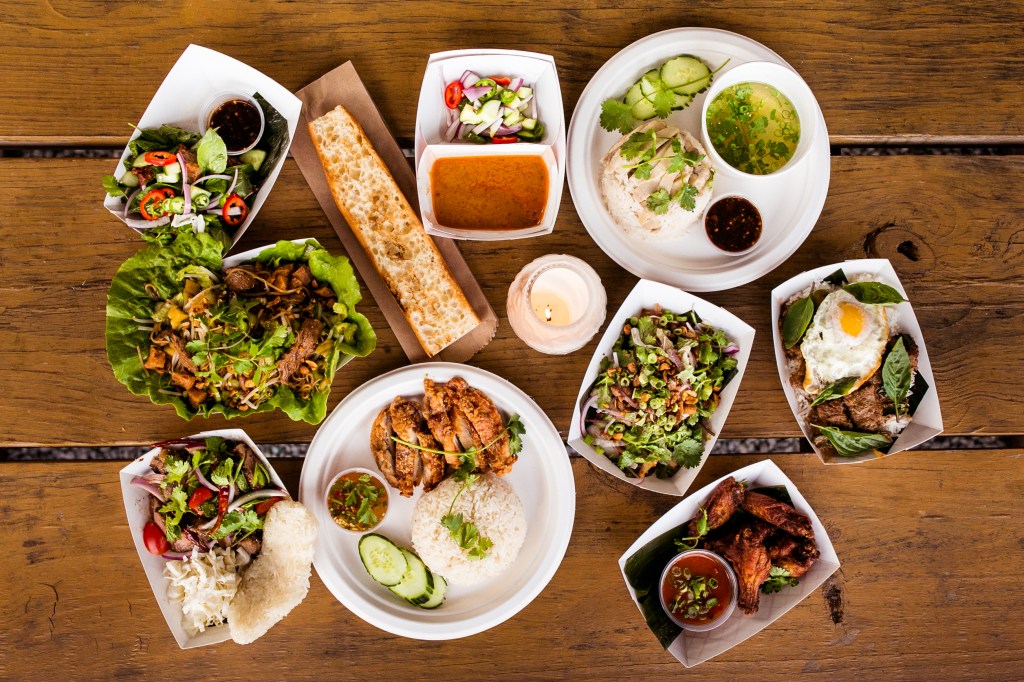 Months after public outcry kept Texas chef Paul Qui from opening a Denver restaurant, another of his concepts has made it to Golden, this time without his name attached.

The operators of Thai Kun at Tributary Food Hall and Drinkery in Golden insist that Qui is no longer a part of Colorado business operations, yet while in Texas, he continues to promote the brand from his social media accounts. Thai Kun debuted as a stall at Tributary last month.

Qui co-founded Thai Kun more than five years ago in Austin, following the success of his original East Side King truck. He planned to open the latter at Avanti last spring, until that Denver-based food hall pulled out of the deal in response to community backlash. In 2016, Qui faced assault charges that were later dropped.

“We apologize to our guests, our tenants and our team for misjudging the severity of the situation surrounding chef Qui,” Avanti representatives said at the time of their decision not to partner with him on East Side King. “At Avanti we pride ourselves on offering a safe, all welcoming environment.”

Thai Kun was originally founded in 2014 by Qui and several business partners in Austin. In Colorado, the eatery arrives via the newly formed restaurant group Mister Thai Hospitality and its managing partner, Johnny Hoang.

For the new Golden restaurant, Hoang partnered with chef Thai Changthong, one of Thai Kun’s original founders and the restaurant’s chef in Austin. Hoang worked with Qui on the planned Avanti opening before it fell through, but Hoang said Qui is not involved with the Golden location of Thai Kun, despite owning the concept in Austin. Changthong did not respond to multiple interview requests.

“Thai Kun Tributary formed under a new partnership group to help grow chef Thai Changthong’s vision for authentic Thai street food,” Hoang said. “I can only speak for what we are doing at Tributary, and I can (say) Paul is not involved with the management group for the Thai Kun in Tributary project.”

Thai Kun’s webpage describes its business as a “spinoff” of East Side King that was “conceptualized by” Moto Utsunomiya, Changthong and Qui.

Qui lists Thai Kun on his Instagram page alongside his other restaurants, including two shuttered Tacqui and Aqui concepts.

Even after the failed attempt to open East Side King at Avanti, Qui’s team said they still planned to bring their concept to Denver.

“Throughout the process, chef Paul and the team have been forthcoming, collaborative and working in good faith towards a common goal,” Qui’s team said in a statement in March. “We still believe Denver is a wonderful community that is diverse (and) open minded and plan on bringing the concept to the city. The support we have received is greatly appreciated and (we) look forward to being here in the near future.”

When asked about Qui’s involvement in the Thai Kun at Tributary, food hall co-owner Josh Dinar sent this statement: “Paul Qui was arrested for an abhorrent act. We do not know him personally or professionally, and we are not doing business with him. We have been assured that he is not associated with Thai Kun in Golden, directly or indirectly.”

The chef was arrested in his home state in 2016 on suspicion of assaulting his then-girlfriend and preventing her and her young son from fleeing, but the charges were dropped in 2018 after the alleged victim declined to participate in trial.

Qui has since opened and closed a number of restaurants around Texas. When he opened Kuneho in Austin in 2017, one reviewer for the Austin Chronicle asked if the chef’s new concept could “offer redemption” for himself. The wording prompted a fury of responses to the notion that opening a good restaurant might redeem charges of assault.

In the post-#metoo climate, Qui has been criticized for not making much of an effort to right his past. After laying low for a while in Texas, he announced last month that he has another restaurant coming soon to Houston. But his Instagram post about it has since been deleted.

Amy McCarthy, editor of the food news websites Eater Dallas and Houston, told The Denver Post that when Qui’s Instagram post was deleted, the Houston food hall “refused to confirm” that he was involved in the new restaurant.

“The real issue when Paul Qui did what he did … he hurt his restaurants, he hurt his business partners, he hurt everybody that was involved in those projects,” McCarthy said. “To me if (business partners) are not willing to take a real stand against that, to distance themselves as far as they can… then they’re culpable. They’re not as culpable. But if you are still working with him, why? And if you’re not, then why are you protecting him?”

Subscribe to our new food newsletter, Stuffed, to get Denver food and drink news sent straight to your inbox.