A vivid green floor covered in semi-precious stones is the focal point of this decadent Asian restaurant in central London, which has been created by The Ivy in collaboration with Adam Ellis Studio.

Nestled in the shadow of London’s iconic St Paul’s Cathedral, The Ivy Asia has been designed to be a “beautiful, experiential and immersive environment” imbued with Japanese decor details.

This is the first Asia-inspired eatery to fall under The Ivy Collection’s umbrella of brasserie-style restaurants, which appear throughout the UK.

The restaurant chain emerged as an accessible alternative to the original The Ivy, which opened back in 1917 as a high-end haunt for celebrities and notable people from London’s arts and culture scene.

When it came to completing The Ivy Asia, the restaurant’s in-house design team worked alongside Adam Ellis Studio to create an interior that would “excite guests from the moment they step inside”.

“Given the unusual scale and layout of the space it quickly became apparent that all our work would have to be entirely bespoke,” the studio’s eponymous founder told Dezeen.

“Richness of detail and colour flows into all aspects of the finished scheme.”

The floor of the main dining room has been inlaid with slices of green, semi-precious stone and backlit so that it emits a neon glow.

On the ceiling there is also a 35-metre-long drawing of two dragons, a dramatic feature that the design team wanted to be seen from outside the restaurant by people wandering at street level.

A series of dining tables have been dotted throughout the space, each surrounded by jewel-tone dining chairs or curved banquettes upholstered in ornately patterned silks. Leafy trees and 12-foot statues of samurai warriors have also been used as decor.

Gold leaves wind across the jet-black tiles that clad the upper half of the room’s walls, while the lower half has been panelled with a series of vignettes. Each one depicts scenes influenced by the work of 18th-century Japanese printmakers like Utagawa Hiroshige and Katsushika Hokusai.

These scenes have also been blown up and turned into wallpaper for the corridors leading off the central dining space.

“We drew many of the characters larger than life to work with the huge scale of the space and dressed them in elaborately detailed silks and fabrics,” explained Ellis. 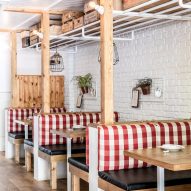 Towards the rear of the room lies a huge bar-counter crafted from antique gold. Directly above perches a faux tiled roof, akin to what could be seen on a traditional Asian temple.

Elsewhere lies a 20-person private-dining area named The Edo Room after the historic Edo period that ran between 1603 and 1868 in Japan.

The Ivy Asia joins the wave of design-focused Asian eateries that have sprung up across London in just the past couple of years.

Examples include RedFarm, a Chinese restaurant in Covent Garden with interiors inspired by a farmer’s market and Cantonese dining spot Duddell’s, which is set inside a listed church in Southwark.