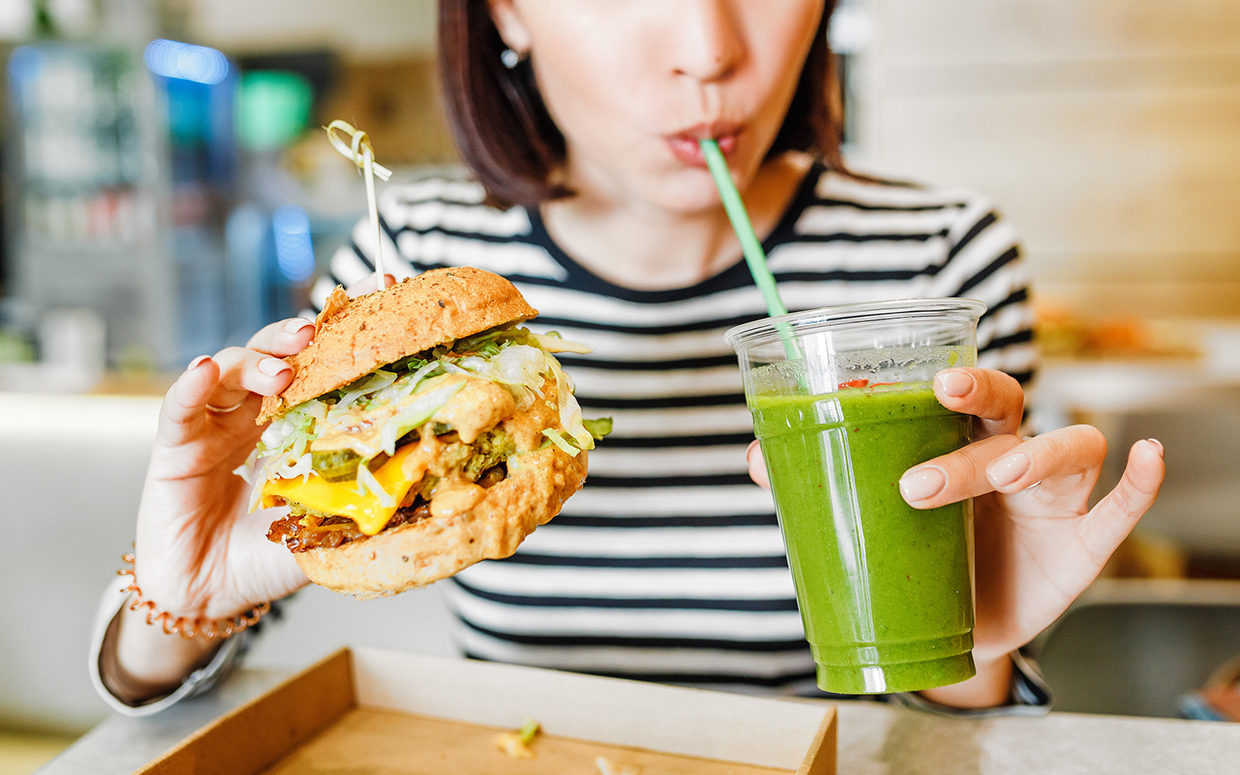 If you browse #vegan on Instagram, the posts on environmental advocacy, photos of delicious plant-based meals, and adorable animal videos go on and on. There are so many vegan influencers doing amazing things on the web right now—and offering us delectable dishes to distract us from the mundane tasks of our day—but here are a few we’re following right now.

Gaz Oakley is a 26-year-old UK chef who developed a passion for cooking at an extremely young age. By 15, he was working as a part-time chef. From that point on, his life has been all about cooking. Oakley eventually stumbled upon veganism after learning more about the mass destruction by factory farms and the health benefits of going plant-based and thus began experimenting with vegan cooking and has never turned back; his 388k Instagram followers are happy for it!

On his page, Oakley shares recipes for everything from vegan Christmas Sugar Cookies to edgier dishes like Grilled Mango Pannacotta, DIY Vegan Bacon—that actually looks like bacon—and Crispy Okra, Spicy Beans & Peas, with Jollof Rice & Steamed Greens. He also walks his fans through the basics of vegan meal prepping and makes impressive recipe videos on his personal YouTube page, which has 844k subscribers.

Mena Massoud, who starred as the lead in Disney’s live-action Aladdin, is not only a vegan, but a highly motivated one at that. In 2018, the actor launched a plant-based food travel show, Evolving Vegan, which documents him traveling across North America on a mission to highlight his favorite plant-based chefs and vegan eats. He documents his experiences on the @evolvingvegan Instagram page along the way. Fans of the actor and the vegan lifestyle in general, will find Massoud’s page filled with colorful photos of his personal meal creations as well as videos of him sitting down with influential vegan ambassadors like the co-founders of Toronto’s @sweethartkitchen, talking tea and pan-Asian cuisine with Chef Cyrus Ichiza, of Portland, Oregon-based @ichizakitchen, and making gluten-free vegan crepes with @little_choc in New York City. He also shares images and commentary about unique plant-based dishes like Eggplant Falafel, Spicy “Tuna” Beets, and highlights international vegan faire dishes from Bolivia, Ethiopia, and beyond.

Lauren Toyota had us at “vegan comfort classics.” This veggie-based recipe developer fills her page with recipes for everything your heart desires, sans the animal products that you choose to leave out. Dishes include modern takes tried and true classics as well as healthy-yet-delicious innovative meals like Vegan Stuffed HasselBack Broccoli, Mashed Potato Waffles, Pistachio Crusted Cheeseballs, Oyster Mushroom Calamari, and 2-Ingredient Vegan Peanut Butter Cups. It’s the perfect Instagram account to add to your feed if you want to distract your workday self with images of delectable dishes.

Genesis Butler may still be in grade school but she’s already gone viral for her Ted Talk on healing the planet. The 12-year-old vegan, “earth warrior” and animal activist has dedicated her efforts to spread awareness on the many benefits of living a plant-based lifestyle. She frequently posts about the role that animal agriculture is playing in climate change, her work with PETA—she was recently named the organizations Young Animal Activist of the Year, and yes, there are food pictures—like this visual representation of how Butler celebrated Thanksgiving in a completely vegan way. She’s a great person to follow if you need an occasional reminder of the mission behind the movement.

Related: How to Eat a Vegan Diet for Under $30 a Week

Dr. Michelle McMacken is a board-certified internal medical doctor who advocates for using a plant-based diet to prevent and reverse chronic diseases. On her personal Instagram page, the doc frequently tackles topics such as whether or not eggs raise cholesterol, the effect that processed meat can have on contracting diabetes, the best sources of plant-based iron, how to keep your gut bacteria happy, and how whole grains can help to reduce the risk of certain types of cancers. She also shares what easy, beautiful, and colorful vegan dining looks like in her world, and posts headlines that you should know about if you follow a plant-based lifestyle.

If you love photos of fresh fruits, happy families and Maui beaches, this account is for you. Ellen Fisher is raising a completely vegan family and frequently shares a glimpse into what that life like looks like. Her 538k followers are treated to daily recipes for delicious breakfast smoothie bowls and nutrient-packed salads as well as photos of her sandy-haired tribe noshing on vegan eats and playing in the waves. The influencer is currently pregnant with her fourth child and is documenting her plant-based pregnancy journey as she goes through it.

Jean-Philippe Cyr brings the Zen into the kitchen with his 20 year Buddhist past. The foodie resides in Quebec with his wife and spends his days creating new recipes for his 270k Instagram followers to enjoy. His dishes are extremely creative and beyond what you’ll find in a basic vegan cookbook including things like Mushroom Portobello, General Tso’s Chick Peas, Tempeh Ribs, Vegan Steak, and a Parfait with Chocolate Bark with a Crunch Walnut Topping. He’s also pretty obsessed with falafel and doesn’t miss the chance to post about them whenever he encounters a good one throughout his travels.

This London vegan recipe creator makes some of the most colorful veggie-filled dishes that Instagram has to offer. Scrolling through her feed will remind you to incorporate those neglected vegetables sitting in your fridge into meals or tasty side dishes. For instance, she takes plain green beans and transforms them into Caramelized Red Onion and Garlic Green Beans with Smokey Coconut Flakes, as the perfect holiday side dish. Or butter beans become the star ingredient in her Butter Bean Kale Soup. She also shares tips on how she maintains her radiant skin, which includes everything from dry brushing to using organic overnight facial oil and her affinity for Muay Thai.

If you like looking at pretty pictures of food, drooling over gooey chocolate chip cookies, and finding ways to make your favorite dishes–and desserts–healthy and filling, Angela Liddon is your girl. The vegan recipe developer runs a successful blog, has published a cookbook, and even has her own app. She’s a master at teaching you how to cook everything from the Ultimate Flourless Brownies for Two to a Green Tea Lime Pie Smoothie Bowl. And just when you thought you couldn’t love Roasted Brussels Sprouts anymore, Liddon comes in hot with these.

Vegan couple Roxy Pope and Ben Pook teach their followers how to craft delicious recipes using minimal ingredients. In addition to adorable photos of the two of them canoodling with their fluffy white pup, the duo is all about the plants. And their food styling is on point so looking at their feed is never a chore. The page features fun recipes like Spicy Thai Noodles in a Mason Jar, Baked Jammy Doughnuts, and ideas for Moroccan-Inspired Meal Prep. And Pope and Pook are big time into advocating for the environment.

Vegan Aussie, Ellie Bullen, is a plant-based nutritionist obsessed with getting you to eat more plants. And, after looking at the meals she shares with her followers, we dare you to not take her up on her challenge. She’s over there sitting poolside sipping on orange, carrot, lemon and ginger juice, waking up to Macadamia Butter Porridge enhanced with edible flowers, and getting avocado nail art done in her spare time. She’s also a mater of self-care and is often posting from the bathtub in whatever city she’s in.

Find out what experts say about the vegan diet for kids.

Dine out or eat in during the coronavirus crisis? Here’s what public health and food safety experts say – USA TODAY