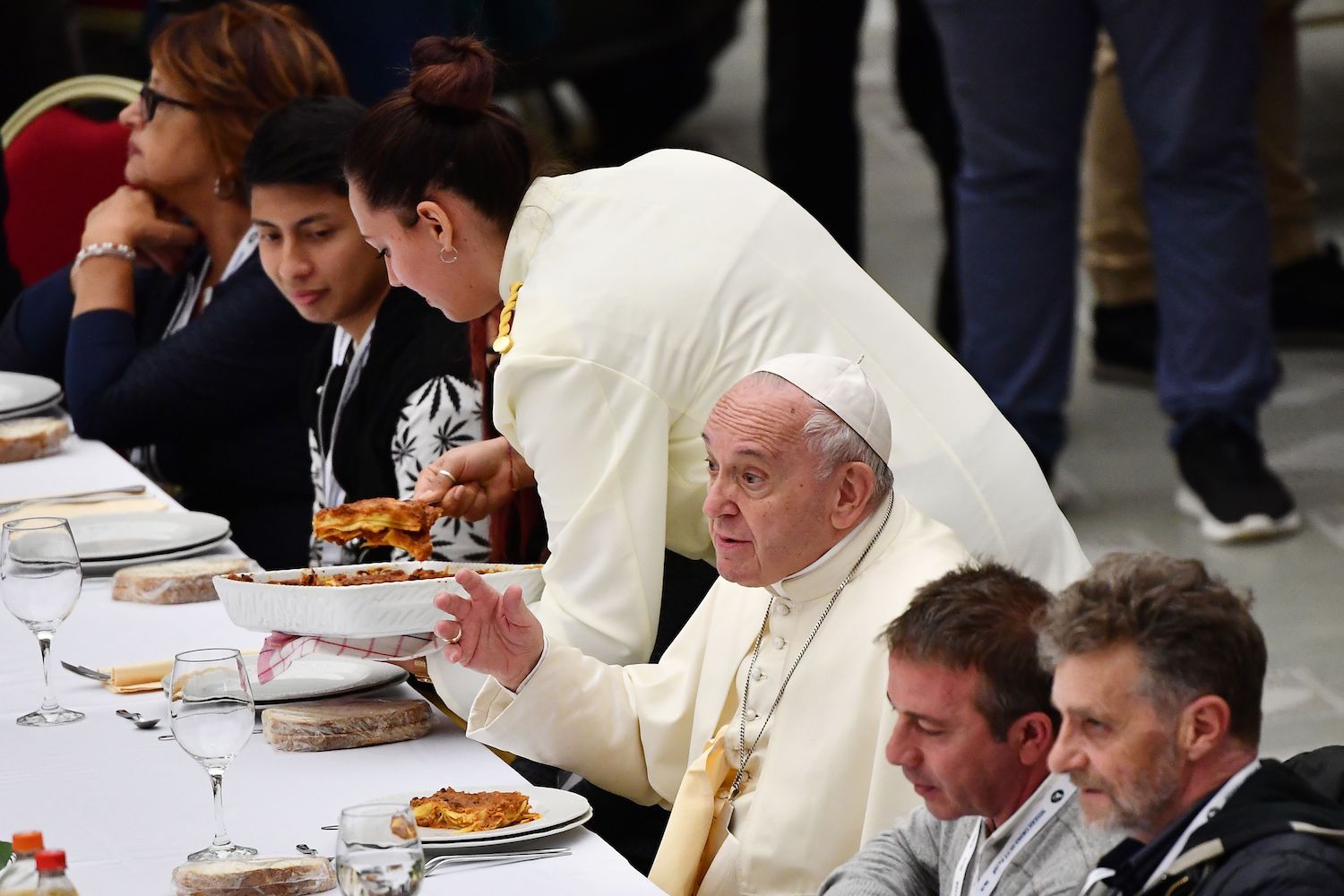 Few things in Italy are more sacred than food. When the pope offered a lunch to the poor of Rome on Nov. 17, it was the menu, rather than the gesture, that made headlines. The pontiff, already unpopular on the right, came under attack from the conservative media because the lasagna his holiness served for lunch was pork-free. The Vatican had figured out that some of the guests would be Muslim and provided a halal meal, and the Italian right took this as a double insult: Not only did Pope Francis show compassion toward immigrants, but he also did so by butchering the recipe for a standard of Italian cuisine that traditionally requires a mixture of beef and pork.

In a recent TV appearance, the leader of the far-right League party, Matteo Salvini, bashed the European Union because an EU directive requiring the traceability of food makes life harder for Italian nonnas who sell homemade pasta in the southern city of Bari. “If you come to Bari and you don’t like St. Nicholas and focaccia, go back to your country,” he said, referring to the city’s patron saint and to one of its culinary specialties. No one had raised an issue with focaccia, but Salvini’s defense was preemptive, to make it clear that “we do not need to change our traditions.”

In Italy, food has become the epicenter of a culture war waged by right-wing parties and their media allies against multiculturalism and European bureaucrats. To the right, traditional cuisine has become not only a source of national pride but also a signifier of national identity, which they believe to be threatened by multiculturalism and political correctness. They vow to defend lasagna and tortellini—whose original recipes require a mixture of pork and beef and a mixture of pork and prosciutto, respectively—for the same reason they defend Christmas nativity scenes and crosses in public schools: to exclude Italy’s Muslim residents, whose religious practice includes avoiding pork, from Italian culture. (Jews, whose religion also prohibits eating pork, are just not part of the equation in his rhetoric—there are not many Jews in Italy, not all of them keep kosher, and those who do rarely attend public schools, so it’s unusual for a Jewish Italian to protest that pork is served in cafeterias.)

After the pope served pork-free lasagna, a prominent conservative Catholic author Antonio Socci wrote an opinion piece in Libero, a right-wing newspaper, accusing Francis of having subscribed to “a suicidal, multiculturalist ideology that leads to the rejection of all that is Christian or Western.” Pork-based lasagna, argued Socci, is a backbone of “Italian civilization, like wine and Parmesan cheese.”

The pope’s lasagna controversy wasn’t an isolated incident. When the archbishop of Bologna, Matteo Zuppi, hosted a dinner for the poor in October, on the day of city’s patron saint, he came under fire for a similar reason. The Archbishop served tortellini, the famous ring-shaped stuffed pasta traditionally filled with prosciutto or pork chops. But to make them palatable to Muslim guests, Zuppi ordered that some of them be stuffed with chicken instead. The choice enraged Salvini, who accused the archbishop of “erasing Italy’s history.”

Among those outraged by the chicken tortellini is Andrea Indini, an editor for the conservative newspaper Il Giornale,who wrote an article “In Defense of Tortellini (and of Tradition).” In an interview, Indini said that deviating from the traditional recipe of tortellini is dangerous because “it could result in distorting our society, even more than globalization is already doing.” He particularly objected to the fact that the original recipe was changed to suit a different culture: “The idea to change tortellini not to bother Muslims is like a provocation,” Indini said. “Tradition is important, and it starts from little things.”

While the populist right is vowing to defend tradition against immigrant cultures and globalization pretty much everywhere, there’s something exquisitely Italian in the focus on food. That can be partially explained by the fact that food does have a special place in Italian culture: Many Italians cringe at the idea of Hawaiian pizza, seeing the addition of pineapple to a pizza as a culinary crime, regardless of their political orientation, and online you can find several videos of Italian nonnas expressing their shock on how their cuisine is distorted abroad.

But Davide Maria De Luca, a political reporter from the online news outlet Il Post, believes there’s also another explanation: “Italy is a country with a very low patriotism, so they weaponize the recipe of tortellini or lasagna.” Likewise, in France, food has been weaponized against Muslim immigrants: Members of the right-wing politician Marine Le Pen’s party have campaigned against kebab shops, and the Bloc Identitaire nationalist movement has organized festivals dedicated to saucisson, a thick French sausage, and red wine.

The right-wing rhetoric of food purism in Italy started in the late 1990s, coinciding with the first large immigration wave from North Africa and the rise of the League. At the time, the League was a separatist party based in the wealthy North (back then, it was called the Northern League), but it also opposed immigration. Combining these two agendas, the party came up with the slogan “Yes to polenta, no to couscous.” (Polenta is popular in the Northern Italian Alps.)

But it was only in recent years that so-called alimentary sovereignty became a major political topic. In 2017, the right-wing city government of Trieste banned “ethnic” food from the cafeterias of public schools to “protect our traditions.” In 2018, Genoa’s conservative mayor banned opening of international restaurants in some streets of the city center, also in the name of “European traditions.” A few years earlier, a French mayor, Robert Menard of Beziers, announced he would block the opening new kebab shops, because they “have nothing to do with our culture.”

Right-leaning politicians are trying hard to look like foodies. The leader of the post-fascist party Brothers of Italy, Giorgia Meloni, has posted a series of cooking videos online: Meloni, who has recently surpassed Salvini in individual popularity, prepares a caprese salad (not a hard task: just layer mozzarella, tomatoes, basil, and olive oil) while lashing against the EU. Salvini’s online presence revolves around food as much as it does around politics: The League leader is constantly posting pictures of his lunch—or dinner, or afternoon snack—and, when he travels across the country, he makes sure to include the local delicacies of the region he is visiting.

Despite the Italian right’s emphasis on traditional food as if it were something unchanged throughout history, and therefore unchangeable, the household names of Italian cuisine often have a foreign origin or influence. And their recipes have changed over time.

“Everyone thinks that the food they eat is typical of the place where they live, but most of it came from outside in more or less distant times,” said Marco Aime, an anthropologist from the University of Genoa. “For example, spaghetti are of Chinese origin, and tomato was introduced from America.”

Polenta, so dear to the League, is made from corn, also introduced from the Americas. Many Sicilian recipes, including pasta con le sarde and couscous (yes, there’s Sicilian couscous) were introduced by the Arabs during the Muslim domination of the island in the 9th century. Sorbet, a must in Italian cuisine, has an Arabic etymology.

Massimo Montanari, a food historian at the University of Bologna, said that “every tradition is temporary and born on the innovation of the past.” For instance, tortellini were invented in the Middle Ages, and “stuffing them with chicken or turkey was considered normal until the 19th century.” The supposed pork-only rule came later (pork was cheaper, and the stuffed pasta could be made from butchers’ scraps).

But although historically inaccurate, the idea that the country’s culinary tradition is immutable and therefore should be protected from foreign influence and change has become ingrained in Italy’s right-wing discourse. When a high school teacher made headlines in November for publicly threatening to fail some of his students because they participated to an anti-nationalist protest, the Italian media was quick to point out that the teacher, Giancarlo Talamini, had a personal website in which he proudly declared that he was a racist “because I love polenta and tortellini.”

Fabio Parasecoli, a professor of food studies at New York University, calls it gastropopulismo. Food, he argues, has become a proxy to describe national identity, and it’s something everyone can relate to. “Food is about what you are. It’s an easy tool, in the sovereigntist discourse, because it touches some intimate chords,” Parasecoli said. “Food brings the great global issues into everyday life.”

Gastropopulism, Parasecoli said, originated from the left, “with movements like Slow Food and left-wing intellectuals reviving the local food culture from deindustrialized areas.” Today, this kind of rhetoric is more popular on the right, but it is still in deindustrialized areas that it enjoys more popularity. De Luca, the political journalist, noted that culinary nostalgia has a particularly strong grip in the country’s northeast, a League stronghold. “The Veneto province, once the economic engine of Italy, now sees his young people emigrate to Milan or abroad,” he said. In this climate, food has become a comforting tradition to cling to.

But this fetishization of food as tradition raises a question: In a country like Italy, who gets to decide what’s tradition and what’s not? After all, in almost 3,000 years of history, the Italian peninsula has experienced a wide range of influences and invasions. First it was the Phoenicians from the Levant, then the Romans, bringing culinary influence from all over their vast empire. After the empire collapsed, Germanic tribes and Arabs took turns invading different parts of the peninsula, while Austria and Spain colonized it in more recent times.

The Arabs introduced couscous and sorbet; the Austrians brought schnitzel, which in Italy is called cotoletta alla Milanese; the renowned cioccolato di Modica, a specialty of the Sicilian town of the same name, is a product of the Spanish domination until Italy was eventually unified, in the late 19th century, under the rule of a French-speaking king.

Seen in this context, culinary tradition is a political construct. It’s “the invention of tradition,” said Parasecoli, the NYU historian. But, invented or not, tradition can become a powerful rhetorical weapon: “It defines your identity, a pillar, a stronghold from which you can kick out outsiders.”

Food in particular strikes a chord, because it’s often intertwined in personal memories, our personal history, and our deepest sense of identity. The idea that the food that we grew up with could be taken away by the forces of globalization is a powerful rhetorical asset, even if it’s an inaccurate one.

Cakes, pizza, pasta: The many mug recipes we tried in 2020 – The Indian Express