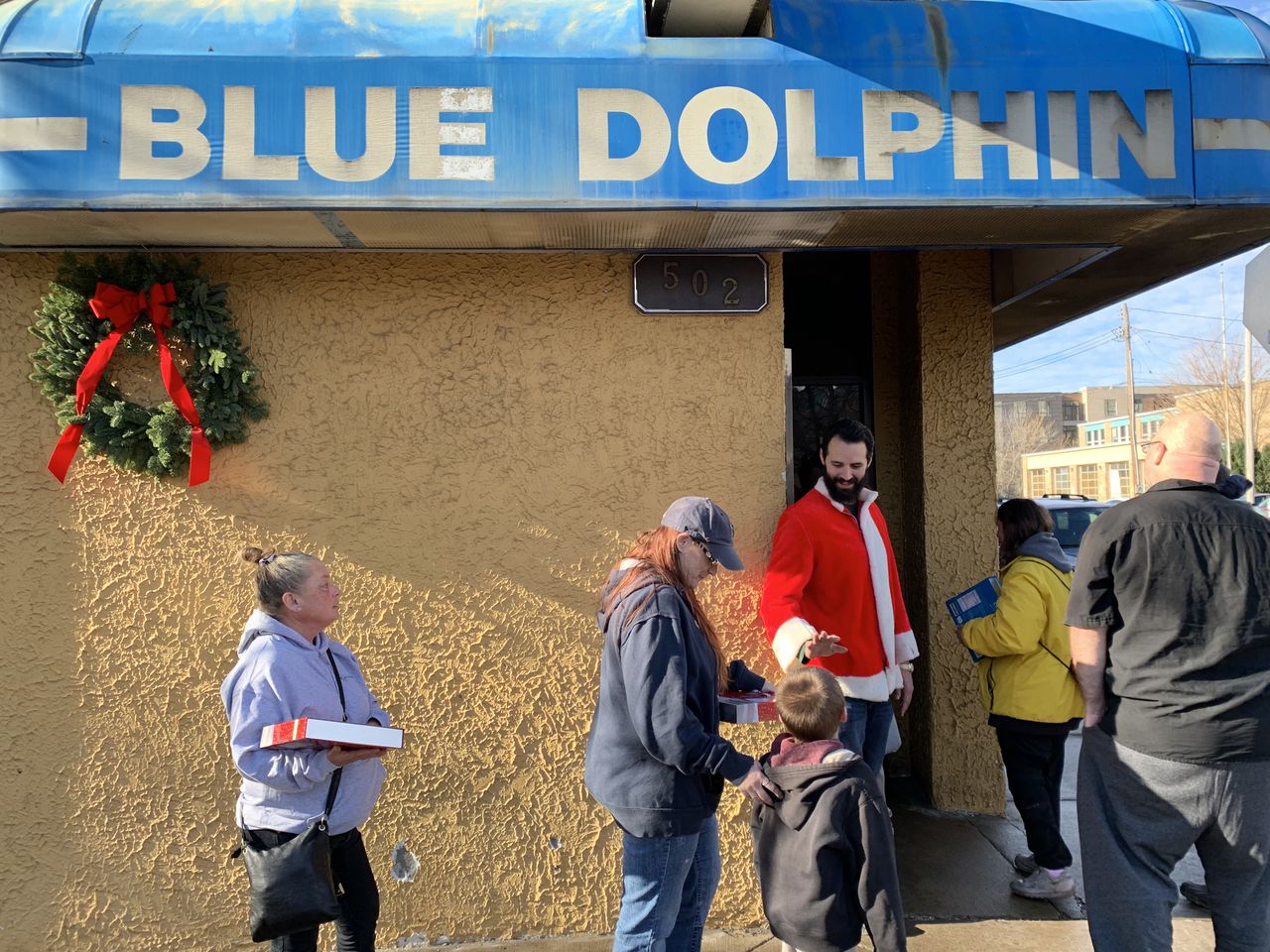 The local restaurant, located at the corner of South Burdick and West Cedar streets, bustled with volunteers rolling silverware, filling bread baskets and portioning out desserts. Their efforts were in preparation for the Blue Dolphin’s 41st annual free Christmas Day meal, which took place from noon to 3 p.m. on Dec. 25, and is organized by the restaurant owner and his family.

“We hope to go through 1,000 to 1,500 meals today,” owner Steve Stamos said to the crowd of volunteers. “But, if we serve 10 people, that’s fine. If everybody helps somebody else, that’s what we’re here for.”

Then, right at noon, the doors opened and families and individuals filed in, sitting down to enjoy the holiday meal.

Volunteers were each assigned a task for the day, and weaved through the crowd with pitchers of soda, water, milk and pots of coffee and trays full of food. Patrons were able to choose from main courses of turkey, ham or prime rib, and each plate came with a side of mashed potatoes, vegetables and a cup of rice pudding for dessert.

“The prime rib was my favorite,” said Marcina West, who attended the meal Wednesday. “We are very grateful to eat here today.”

West and her partner were among the first few to be seated once the doors opened at noon. She said she had been to the Blue Dolphin before on Christmas Day “many moons ago,” and was excited to return this year.

“The food is great,” West said.

Patrons were welcomed into the restaurant by a volunteer dressed in Santa attire and a table of free candy canes. Volunteers passed out donated gift bags filled with stuffed animals and books to children in attendance, and hats and gloves to all diners.

The tradition was started in the 1970s by Stamos’ parents, Julie and Pete Stamos, who have both have since passed away. The couple owned the former Rex Cafe in Kalamazoo, which was closed on Christmas, and learned some of their customers had nobody with which to celebrate the holiday.

“It basically started out of necessity,” Steve Stamos’ daughter, Julie Stamos, said. “The thought of not having anyone to celebrate Christmas with broke [my grandfather’s] heart and he asked them to come over.”

Pete Stamos would transport people to his home and Julie Stamos would cook up a huge meal, Stamos said. Then, as the years went on and more and more people were interested, the couple decided to move the meal to their restaurant and it has taken place every Christmas since.

“My grandfather really believed that if you have someone a hot meal, at least they were cared for and were able to have that,” she said. “People really show up in full force to help out with the event.”

She added that her dad supplies most of the food for the meal with the help of some donations.

For some, coming out Christmas morning and volunteering at the meal has become a tradition. George Magas, of Kalamazoo, said he has been volunteering each year for around five years and thinks it’s an important asset to the community.

“This is one of the wonderful things about Kalamazoo,” Magas said. “There are so many people that are so giving of their time, money and resources. It’s beautiful.”

“It’s a humbling experience,” Moore said. “I don’t know anybody else here, but we’re all here for the one reason and that is to give back.”