When one door closes, another opens. That, thankfully, is the story of food on the Vineyard. Chefs shuffle from one restaurant to the next. Food flows from farm to table to compost and back again.

It’s like we don’t want to let anything or anyone go. Once you’re here, you’re part it. You grab on to the life raft and the others will lift you up. Food people are the best. Whether your goals are modest (Start a cookie business! Sell honey! Make cutting boards!) or ambitious (Open a fish market! Open a second restaurant! Start a food festival!), no one here is going to call you crazy. You can do it.

There was a lot of crazy in 2019 and it was all good, from recycling pigs to no-till farming, from double taquerias to triple Ben deForests, from Noodle Night to Raclette Night, from Ruth Reichl to Sam Sifton, from vegan flatbreads to farm-baked flaky chocolate croissants. 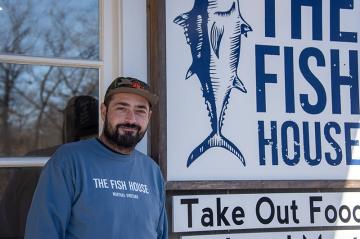 The chef shuffle went like this: Joe DaSilva left the Lambert’s Cove Inn and headed to Oak Bluffs to help his old friend chef Ben deForest open his third restaurant, Oyster Bar 02557, on Circuit ave. To fill in the hole at Lambert’s Cove, chef Jimmy Alvarado, late of Isola, went up-Island to open Woods (and to start Noodle night!). Chef Richard Doucette went from one side of Edgartown (The Harbor View) to the other (The Covington).

Everett Whiting (of Local Smoke) started his new take-out venture at The Fish House at the airport. Long-time Island chef Austin Racine (Café Moxie/State Road/ArtCliff) signed on to fire up the kitchen at the new Noman’s (the former Lola’s). Meanwhile ArtCliff’s Gina Stanley revved up the First Light Café at the new museum.

Kyleen Keenan, former co-owner of Not Your Sugar Mama’s, turned her passion for clean eating into a winning formula for vegan, gluten-free flatbreads sold out of a beaming blue truck in Vineyard Haven. Named Frankie’s Flatbreads for Ky’s daughter, the truck also popped up at the Beach Road Weekend music festival and cranked out hundreds of flatbreads over the course of three days.

Meanwhile, in other food truck news, beloved West Tisbury School chef Jenny DeVivo took on a truck of a whole other color — a reality TV show food truck. She appeared (along with Vineyarders Nisa Webster and Eli Carroll) on the TV Food Network’s reality show The Great Food Truck Race. 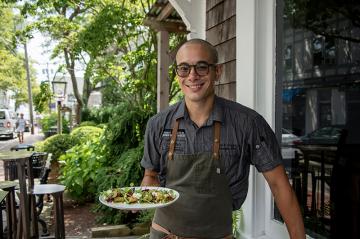 Richard Doucette moved from the Harbor View Hotel to the Covington.

The Island chef shuffle of course spilled over to the restaurant rotation. In one case, two restaurants became one: Humphreys Bakery and Slice of Life Café are now Life at Humphreys in Vineyard Haven. In another case, one restaurant became two: Backyard Taco became Taco House and Dos Mas. Dos Mas took over the old Slice of Life space in Oak Bluffs, while Zared and Evan Shai’s original taqueria (with the new name of Taco House) stayed in Edgartown. In the case of the Harbor View Hotel, two old restaurants (Henry’s and the Lighthouse Grill) became two new restaurants (Bettini Restaurant and Roxana Bar) with one brand new chef, Patrice Martineau.

The Kelley House opened MYX Market next to The Newes to sell Starbucks coffee, smoothies, bowls, personal pizzas, salads and other healthy convenience foods. On the way into Edgartown, TownMV moved into the old Grill on Main space, bringing 18 draft beers and a menu of comfort favorites with it. The Golden Bull Brazilian Steakhouse opened at last in the long empty spot at Five Corners in Vineyard Haven, introducing the Island to the generous portions of rodizio-style eating. And MV Salads perked up the top end of Circuit avenue in Oak Bluffs with create-your-own and custom salads.

Our little swirling eddy of food inevitably sucked in outliers from the mainland culinary world as the summer heated up and the fall food festival season arrived. Chef Martineau convinced New York city chef Daniel Boulud to cook a special multi-course dinner at the Harbor View during the Martha’s Vineyard Food and Wine Festival. NYT Cooking founding editor Sam Sifton charmed a packed room at the Harbor View for Cook the Vineyard’s event, All the Food That’s Fit to Eat, during the festival.

Earlier at the 2019 MV Book Festival, former Gourmet magazine editor and bestselling memoirist Ruth Reichl (Save Me the Plums) filled tents with fans while Washington, D.C., Chef Kwame Onwuachi (Notes From a Young Black Chef) and the Pollan family (Mostly Plants) helped spread the word on two of the hottest topics in food: restaurant culture and plant-based eating. The dynamic (and yes, circular) relationship between cooking, farming, sustainability and nonprofits on the Island only got stronger this year. The Farm Institute buoyed its educational mission by rolling out new garden-to-table cooking classes for young and old, while its new Katama neighbor, Slough Farm, brought children to the farm to learn about heritage animals and fresh food.

In very big news, Island Grown Initiative brought a 26,000-pound, 45-foot-long in-vessel composter to the Island and put it to work immediately in conjunction with a new plan to increase Island-wide composting. On a much smaller scale (though with hog-sized enthusiasm) young farmer Jo Douglas started her Fork to Pork business with 30 pigs, a truck full of trash cans, and the idea of reducing food waste while also returning humanely raised meat to the Island food supply.

Two groups — the new stewards of Beetlebung Farm up in Chilmark as well as long-time farmer Andrew Woodruff in partnership with IGI at their Thimble Farm Hub — began serious efforts to renew soil with regenerative farming techniques that do not include tilling with heavy machinery.

Definitely the most delicious farm news of the year was the debut of The Grey Barn and Farm’s bread bakery. Former farmer Christian Walter (brother of Slip Away Farm owner Lily Walter) left the Island for culinary pursuits, became an experienced bread baker, and returned (all things in full circle) to join the Grey Barn team last winter. Once the bakery was in full operation this summer, artisan loaves flew off the shelves; lines now regularly form in the farm stand on weekends when Walter’s freshly baked chocolate croissants are available.

We also found our favorite Island-grown vegetable of the year at Grey Barn: the new koginut squash, a cross between a butternut and a kabocha. Later on in the season we found them at Morning Glory, too, where farmer Simon Athearn was also trying out the new palm-sized mini butternut with the sexy name of 898 squash. 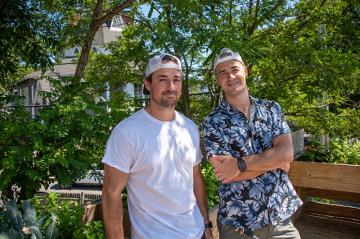 And we said goodbye to Chilmark Chocolates. It made us feel the way we feel at the end of a very, very good book. You want more but you’re so grateful for what you got. What better food story is there on Martha’s Vineyard then Mary Beth Grady and Alison Burger’s 33 plus-year-run at spreading chocolate, joy and opportunity around the Island?

And like the best books, this one ends with the hint of a sequel. This is the Vineyard after all, where we pass it on. Turns out two young women, Chilmark sisters Allison and Sarah Flanders, are planning to open a new small-batch chocolatier next spring with money raised largely from the Island community. They learned to make chocolate while working for Grady and Burger at Chilmark Chocolates.

So 2020 looks good, and not just chocolate-wise. The first ever Martha’s Vineyard Oyster Festival arrives in May. A new vegan restaurant may be on the horizon. Another food truck is in the works. Chefs will shuffle, restaurants will rotate, but unlike musical chairs, everyone will have a seat when the music stops.