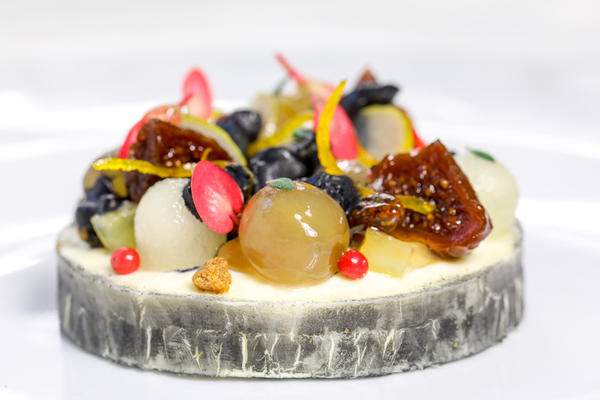 If you’ve ever wondered what it was like to eat in ancient Pompeii, a new menu in London offers a rare opportunity.

Minus the whole “massive volcanic explosion” thing, life in the Roman city of Pompeii continues to fascinate people in the present day. Some of that is, ironically, due to the aforementioned volcanic explosion: in decimating the city, it also preserved a great deal of information about its residents’ everyday lives.

Now, one acclaimed London restaurant is allowing diners to explore another side of life in Pompeii: namely, what was it like to eat there?

At T Magazine, Meara Sharma explored chef Heston Blumenthal’s latest foray into historically-inspired cooking. Blumenthal is something of an expert on revitalizing historical recipes (and has written a cookbook on the subject). He’s also sent a sandwich into space, though he’s not the only high-profile figure in England to send food into orbit.

Blumenthal’s Pompeii-inspired menu began with an exhibit at the Ashmolean Museum of Art and Archaeology at the University of Oxford. The show, “Last Supper in Pompeii,” focused on the dining habits of ancient Romans. Sharma describes this with a delectable specificity:

Excavated frescoes depict wealthy denizens reclining before multicourse meals — they tended to eat small-plates-style, just like today’s gourmands. One fish-filled panel celebrates the sea’s bounty, and on display too are salvaged bottles of garum, a fermented fish sauce that the Romans poured on everything.

Blumenthal and Dinner by Heston executive chef Ashley Palmer-Watts designed the menu based on, as Sharma writes, “the carbonized food remains on display at the museum and the recipes gathered in the first-century Roman cookbook known as Apicius.”

The menu first featured at a banquet at the Ashmolean, and will be available at London’s Dinner by Heston from January until March. The three-course meal will set diners back £88.00, and includes everything from carbonized bread to a duck-and-turnip dish drawing on centuries-old techniques.

It’s the first in a series of historically-themed meals that the restaurant will offer. There’s something fascinating about this kind of culinary archaeology — especially when it’s this delicious.

Eating out of the world: First space hotel to open in 2027 – The Siasat Daily