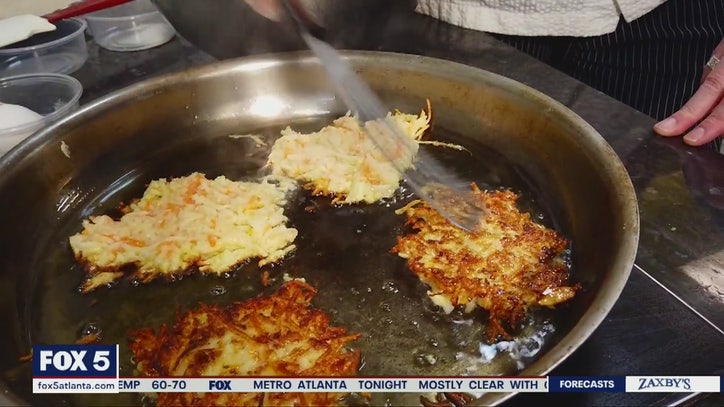 DUNWOODY, Ga. – Another holiday season has come and gone — which means the team at one of Metro Atlanta’s top bakeries is now recovering from one of its busiest times of the year!

The Dunwoody bakery serves up their potato latkes

We recently spent some time at Alon’s Bakery & Market in Dunwoody, learning about some of the special foods served up this time of year by Executive Chef-Owner Alon Balshan and his team.  Born in Israel, Balshan moved to the United States back in the 1980s, eventually opening the first Alon’s Bakery location in Morningside back in 1992.  Since then, Alon’s has become a local favorite thanks to its handmade selection of breads, cakes, and pastries — and the bakery’s Jewish-style menu makes it a natural for those looking to cater in their Hanukkah parties and family get-togethers.

So…what kind of food are we talking about?  Potato latkes are a favorite, of course — served with sour cream and applesauce — as are the delicious, deep-fried jelly donuts known as sufganiyot (including Nutella and Dulce de Leche-filled!).  We also tried out the savory puff pastries known as borekas, and babka, which is an Eastern European yeast coffee cake.

Man with rifle arrested after barricading himself in LoDo restaurant – 9News.com KUSA