Ty Reynolds and Nick Smith have run Mazurek’s Bakery for the last seven years, but thanks to the energy, freedom and sense of community derived from operating the Mazurek’s Sweets & Eats food trailer, the duo has decided to sell the brick-and-mortar and develop a mobile business.

“The Old First Ward is expanding and the bakery is in a good place,” said Reynolds. “This is a good opportunity for us to start something new.”

Reynolds and Smith are in the process of finding a buyer for the Polish bakery, at 543 South Park Ave., which has been on the market for a few months. A so-far unnamed truck has already been purchased by the pair, a 26-foot-long mammoth that’s a major upgrade from their 8-foot-by-12-foot trailer from last summer.

Thanks to considerably more space, the owners will be able to expand their mobile menu, and their aim is to follow an expedited farm-to-food-truck process.

[Sean Kirst: Marriage and message of respect from Reynolds and Smith]

Reynolds and Smith have already fostered relationships at farmers markets – South Buffalo and West Seneca, so far – and are eager to work with these local farmers to buy fresh produce and meat in order to cook dishes for the market’s customers that day. From-scratch Tater Tots and loaded Tater Tots are among Reynolds’ ideas. 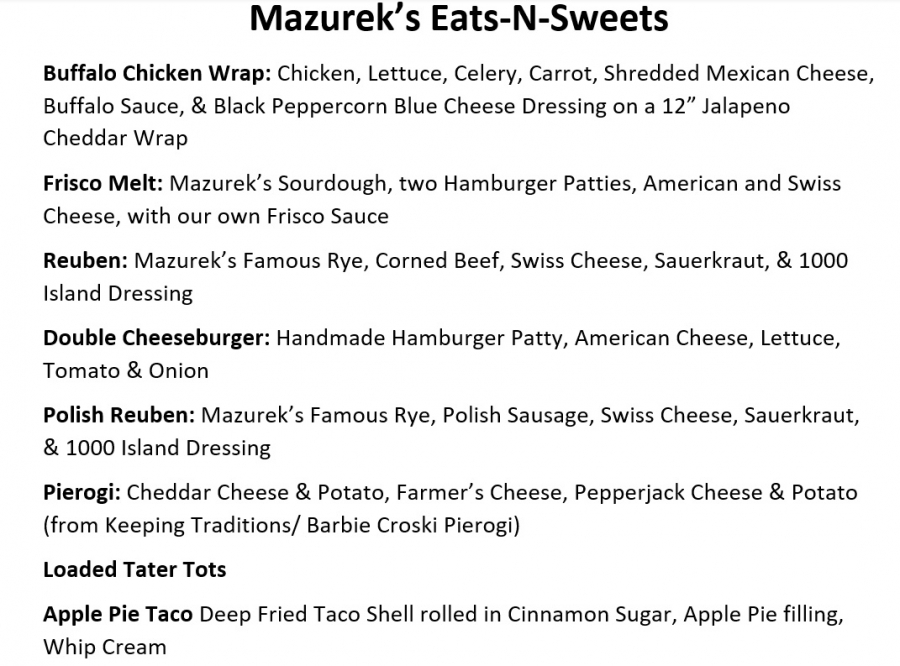 An example of a menu from Mazurek’s Sweets & Eats trailer, which will evolve into a full-blown food truck business this spring – likely under a different name. (Image courtesy of Mazurek’s)

The food truck endeavor is expected to be ready by spring, with the goal of joining the rotation at Food Truck Tuesdays in Larkin Square and serving at nearby Flying Bison Brewing Company on the other Tuesdays. Plans are to continue selling at Samuel’s Grande Manor on Food Truck Wednesdays and explore other opportunities for service. For now, their primary social media means is @MazureksEats on Instagram.

The brick-and-mortar Mazurek’s has been an Old First Ward staple since 1933, with the founding family owning and operating the business until 2012, when Reynolds and Smith purchased it.