MONTREAL (CITYNEWS) – A birthday cake mix-up is how a young hockey fan will remember his birthday.

As a die-hard Toronto Maple Leafs fan, Jacob was expecting a hockey-themed logo on his cake. However, he ended up with the maple leaf foods logo instead.

Upon seeing the cake Jacob and his father were not impressed by the mistake and gave the cake a big thumbs down. 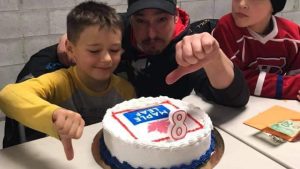 Jacob and his father reacting to the birthday cake PHOTO CREDIT: Tania LevesqueHis stepmom, Tania Levesque, posted about the incident on Facebook and it went viral.

The family won’t name the local grocery store, but never imagined they would get it wrong when they asked for a Maple Leafs logo. By the time they picked up the cake, it was too late to get a new one made.

“I just want everyone to know we laughed a lot, and nobody is unhappy,” she said.

A Facebook post she wrote describing the incident had been shared more than 1,400 times as of late Monday afternoon.

-with files from Canadian Press

As his restaurants’ customers return, a Miami chef is missing a critical ingredient: Workers – The Washington Post

A slice of Carnival: Unique flavors that take the cake – FOX 8 Live WVUE