A Lansing, Mich., business owner is trying to set the record — and answering machine — straight after an ex-boyfriend co-opted her restaurant’s telephone number and lied about the establishment closing.

Linh Lee, owner of popular Vietnamese barbecue spot Capital City BBQ, started the business in 2015 with her partner after reportedly supplying the capital to build it herself. However, after the two split in July, her ex-boyfriend, Regan Louchart, allegedly decided to take out his anger on Lee’s business by recording a bogus voicemail telling potential customers that the restaurant was closed. 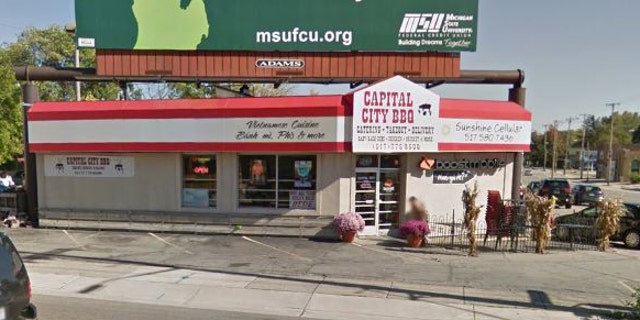 On Facebook, Lee informed her customers about the phone number dispute, stating, “Our phone line has been stolen by an unethical person who is not [a part] of our restaurant.”
(Google Maps)

“Happy Holidays from Capital City BBQ. Due to the Holidays, we will be taking an extended leave until March 1st. We look forward to your business and seeing you after March 1,”  the voicemail said. “Have a happy holiday, thank you.”

Since the voicemail was changed, Lee told WILX her business slowed down significantly. The restaurant, which was featured on Guy Fieri’s “Diners, Drive-Ins, and Dives” in 2017, was usually bustling. However, for three days straight, Lee told the outlet she received no calls and she made less than half of her usual sales.

On Facebook, Lee informed her customers about the phone number dispute, stating, “Our phone line has been stolen by an unethical person who is not [a part] of our restaurant.”

The post received dozens of comments and hundreds of likes supporting Lee and Capital City.

Though Lee got a new phone number for her business right before December, which has dramatically changed business for the good, she said the old number is still listed on popular websites like TripAdvisor, as well as the signs for Capital City BBQ.

And more than just the phone number, Lee says she’s been dealing with the fallout of the breakup since July after Louchart allegedly emptied the business bank account. Louchart also reportedly stole a nearly $14,000 smoker from the restaurant after midnight the day before Thanksgiving, forcing Lee to shell out for a new one and staying up all night smoking turkey just to meet her Thanksgiving orders, Lansing State Journal reported.

Lee and Louchart were together for nine years. She reportedly started the business with her now ex-boyfriend after she asked him to renovate the cell phone store she owned by adding a restaurant on the side. The pair became co-owners of the business, with Lee focusing on perfecting her family’s Vietnamese recipes while Louchart handled the barbecue.