Dallas steakhouse Knife made Esquire’s list of the 40 most important restaurants from 2010 to 2019. That’s a big win nationally for chef John Tesar, as it’s just one of two Texas restaurants on writer Jeff Gordinier’s list.

The other Texas restaurant listed is Nancy’s Hustle, a bistro in Houston.

Knife opened in 2014, “just when the American steakhouse started to grow stale,” the Esquire story says. But “Tesar found a way to reinvent it.” That might seem interesting for out-of-state eaters, but it’s much more relevant to Dallasites, who know that Big D has been (often unfairly) pigeon-holed over the years as “a steakhouse city,” as Tesar told us Jan. 6.

Esquire’s list is not necessarily a list of best restaurants of the 2010s, the writer points out: “Our point is that when people look back on this arbitrary demarcation of years, these will be the restaurants that bring time-specific memories flooding back.” Tesar says he’s honored Knife is among the few Texas restaurants named.

One of Tesar’s best moves with Knife is that he partnered with Texas beef producer 44 Farms, which calls itself the largest black Angus producer in the Lone Star State. The restaurant is best known for its dry-aging steak techniques, where customers can purchase cuts of beef that have been aged for more than half a year. Depending on how long the steak has been hangin’ out, it can take on natural flavors of blue cheese or truffle.

Beyond steak, Tesar is also known for being what D magazine called the city’s “most hated chef,” a title he bucked on his second season on Top Chef in 2016. 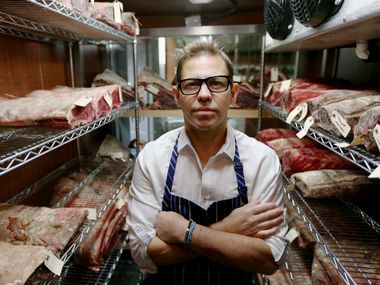 Since Knife opened inside a hotel at Mockingbird Lane and Central Expressway in Dallas in 2014, Tesar and his team have opened Knife and Knife Burger spinoffs in Plano. He’s currently working on opening a restaurant called Knife and Spoon at the Ritz-Carlton in Orlando and a seafood restaurant called Outer Reef in Laguna Beach, Calif.

Dallas will remain Tesar’s home. “Knife is where it all is, and begins,” he says of the Dallas steakhouse.

“We’re going to try to bring it to other places, but we’ll never re-create it like we did in the beginning.”

Tesar assents that Knife also experienced bouts of good luck, like how he named the restaurant’s cheeseburger The Ozersky, after Esquire writer Josh Ozersky, and “hamburger geeks” continue to travel from all over the country to try it.

“These are things, after all these years, that I kind of shake my head and laugh at,” Tesar says. But he also notes, “There was a lot of luck involved but also a lot of risk and research.”

Many chefs in 2019, Tesar included, had been asked about two things over the past few months: Bon Appetit’s award for Dallas as the Restaurant City of the Year, and the James Beard Foundation’s choice to establish Texas as its own region, which would guarantee that a chef in Texas wins every year. Tesar says the James Beard award in his home state “is going to be a big thing, for sure.”

“I was the guy who turned around the Mansion and I still haven’t won a James Beard award,” Tesar says. He has been a semifinalist in the competition four times between 2009 and 2017, including twice for his work at Knife in Dallas.

“I look at the politics of that and say, ‘Maybe one day.’”

The 5 Best Restaurant Stocks of the Decade – Motley Fool

Richard Lander: The non-recommendation guide to eating out in London – onlondon.co.uk