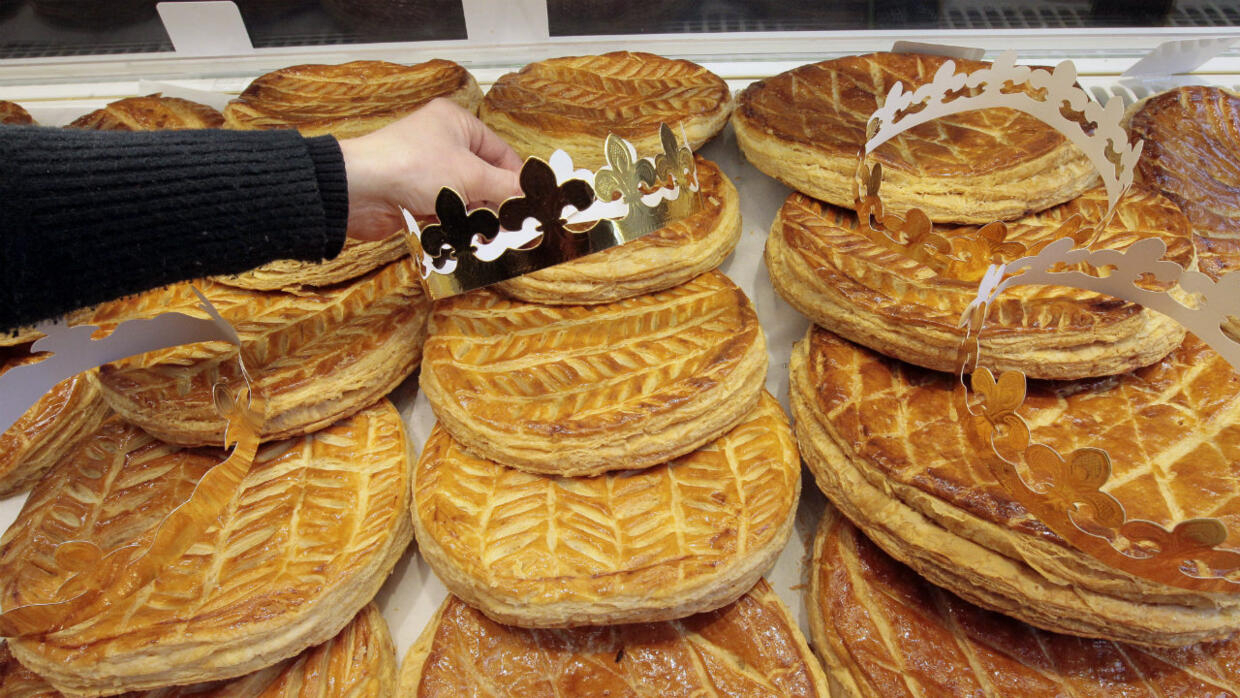 The holidays have passed and nationwide protests and transport strikes in France are still ongoing, but patisserie windows throughout the country are stacked with shiny, golden brown galettes des rois, or king cakes, a sure sign that the festivities are not quite over.

The galette, a delicious cake often made with puff pastry and frangipane, is traditionally eaten in France on the first Sunday of January to celebrate the Epiphany, the day commemorating the visit of the Magi, or the Three Kings, to the Christ Child. Nowadays though, the French feast on king cakes at school, work, or at home with friends or relatives, throughout the entire month of January.

Galettes vary. In addition to the traditional frangipane version, filled with a mixture of pastry cream and almond cream, other types abound, and might include apple filling, plums, lemon, chestnuts, chocolate and others.

But no matter how it’s made, the galette des rois always hides a much coveted surprise, the fève, literally bean in French, but actually a ceramic trinket or charm.

The person lucky enough to bite into it is graced not only with a dentist’s appointment, but with good luck, and is declared queen (or king) of the day. The lucky royal may then also choose a partner (king or queen) and each gets a paper crown to don for the party.

But practices vary. For example, some say the person who got the charm has to bring the next galette des rois, or else buy a round of drinks for all those present.

The tradition of the galette and the fève goes back to Roman times, when huge feasts were held to celebrate solstice and honour Saturn, the pagan god of agriculture and time.

Masters and slaves would feast together and a bean would be slipped into one of the dishes or baked into a round golden-coloured cake (shaped like the sun for the solstice); the slave who found the bean would be anointed king for the day.

The Church later instituted the Epiphany on January 6, to celebrate the meeting of the Three Kings (Melchior, Gaspard, and Balthazar) and Jesus, and the tradition of the bean in the cake became associated with the Christian feast.

Traditionally, the cake was cut into slices, with one slice, la part du Bon Dieu, or God’s portion, set aside and given to a poor person.

The bean was eventually replaced by a ceramic, porcelain or terra cotta figurine depicting Baby Jesus or another religious symbol. But these too, later evolved to include an endless variety of trinkets, from plain geometric shapes, to cultural symbols, including famous singers, sports figures, cartoon characters and more. One can, however, still occasionally bite into a (more rare) Mother Mary or saint.

The custom of king cake is also practised in countries other than France, such as Switzerland, Belgium and Canada.

In Spain and some Latin American countries the cake is known as roscon de reyes, an oval-shaped cake symbolising a crown, also eaten on January 6.

In some areas in the US south, such as in New Orleans, Louisiana, king cake is often shaped like a ring and made of cinnamon roll dough, topped with sugar or colorful icing. There, it is associated with Mardi Gras, or Carnival, celebrated between the Epiphany and Ash Wednesday. That cake also hides a trinket, and whoever finds it is expected to bring the next king cake.

All sizes, shapes and prices

In France, king cakes of different sizes, shapes, quality and flavor are sold at bakeries or supermarkets, and the price for a good one can be steep. The simplest galette for six people at a large supermarket chain might cost €7, but one of the same size at a high-end patisserie can set you back €50 or more.

Among the best galettes in Paris in 2020, according to the French daily Le Figaro, is one the paper crowned the “most Parisian galette,” sold at The French Bastards bakery in the capital’s 11th arrondissement (district) (€40 for six).

That galette is made of puff pastry stuffed with cinnamon frangipane and pieces of roasted, chopped almonds, and is decorated with a lacey rose-shaped top reminiscent of a stained glass window, in honor of the Notre Dame Cathedral, which was severely damaged by a fire in 2019.

Another is the fruity Galette Mogador by France’s pastry king, Pierre Hermé, based on the chef’s signature yellow, passion-fruit and milk-chocolate Mogador macaron. This galette is made with passion-fruit-infused almond cream, roasted caramelised pineapple and milk chocolate ganache. It can be found at Hermé’s Parisian shops through January 29 (€35 for four people or €56 for eight).

If these are too elaborate (or expensive) for a simple family gathering, perfectly good king cakes can be bought at your neighborhood bakery or chain.

And for even less, you can make your own galette. There are plenty of recipes online, from very easy (yet still delicious) to more elaborate.

One example is a popular Parisian recipe offered by David Lebovitz, an American best-selling cookbook author and food blogger based in Paris, “made of creamy almond frangipane sandwiched between layers of buttery pastry”.

There are two main kinds of galette in France, according to Lebovitz’s blog. One is that puff-pastry version he offers in the recipe above, and the other is “a circular yeasted cake, more popular in the south of France, festooned with colourful, sticky candied fruit”.

Whether you choose to make the classic galette or the southern French Provençal version, do not forget to bake in the fève.

The French custom when celebrating galette des rois with children is to cut the cake and then have the youngest child go under the table and, without looking, name the person to be served. This is to prevent cheating by guests who might be tempted to look for conspicuous bumps that might reveal which piece has the lucky king-making charm.

If you cannot bear the prospect of tears being shed, you might consider preparing several galettes, or even cheat by throwing in two or three fèves into one cake so that everybody can be queen or king, and sibling wars can be put off for another day.