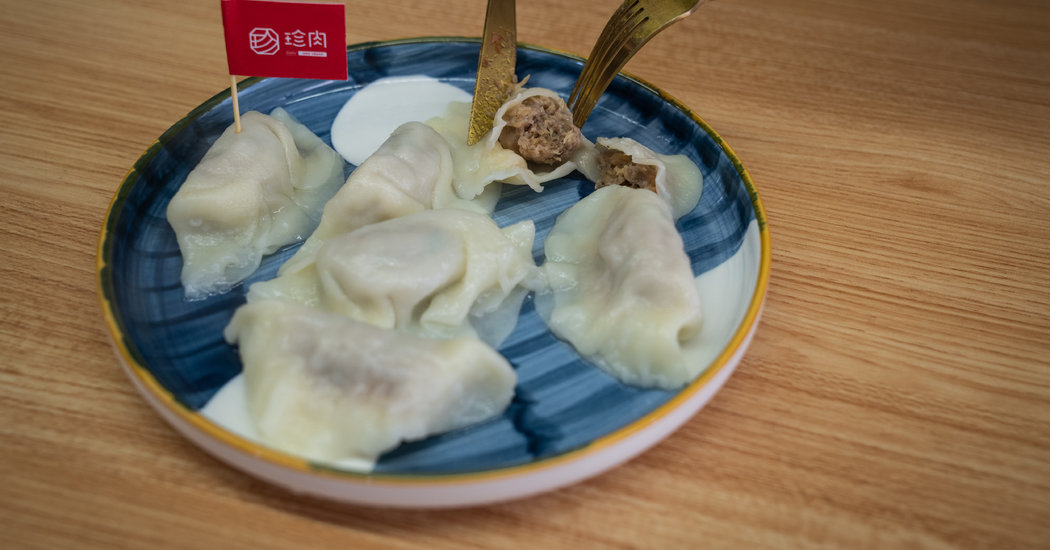 As an early sign of how Impossible Foods’ plant-based meat may fare in China, the placement of the company’s booth at the International Import Expo in Shanghai was not particularly auspicious.

Impossible Foods was relegated to the fringes of a cavernous convention center, surrounded by entrepreneurs with far less expansive ambitions than the transformation of the global meat industry. To one side of its booth in November was a company that sells sliding glass doors. Also nearby: a purveyor of Persian rugs.

“It was kind of obscure,” said Pat Brown, the chief executive of Impossible Foods. “Some far corner of this vast, insanely huge space.”

Over the last couple of years, Impossible Foods and its main rival, Beyond Meat, have gone from start-ups with niche followings to major American food companies. They have struck deals with fast-food chains like McDonald’s and Burger King, and earned plaudits for their efforts to replace animal products with plant-based substitutes that are healthier and less harmful to the environment.

Now the companies are looking to make inroads in a potentially even more profitable market with a major environmental footprint: China, the world’s largest consumer of meat. Meat production is a leading cause of climate change, experts say, and the growing demand for pork and beef in China has fueled much of that environmental damage, from water shortages and heat waves to deforestation in the Amazon rainforest.

“Every time someone in China eats a piece of meat, a little puff of smoke goes up in the Amazon,” Mr. Brown said. “It is an absolutely essential and extremely important market for us.”

But selling plant-based meat to mainland China will not be easy. Beyond Meat is available in dozens of countries, while Impossible Foods has sold its product in Singapore, Macau and Hong Kong. And the two companies have overcome pushback in the United States from cattle farmers, meat lobbyists and restaurants like Arby’s.

China, however, presents a different set of political and cultural hurdles, which other American food brands have found difficult to overcome. The complex regulatory process involves a web of state agencies that Impossible Foods and Beyond Meat will have to navigate. And then there is a more existential question: Will the Chinese public buy plant-based meat?

Despite the long history of vegetarian proteins in Chinese cuisine, many consumers in the country’s growing middle class consider meat an important status symbol, or have radically different expectations from Americans about how it should be prepared. In recent years, a number of Chinese companies have begun developing plant-based products, but those mostly target vegetarians, not the meat eaters Beyond Meat and Impossible Foods hope to attract.

“If I were on the board, I’d look at the C.E.O. and say, ‘You’re crazy,’” said Jeremy Haft, an expert on Chinese trade and the author of “Unmade in China,” a 2015 book about the country’s economy. “Put this idea on the shelf for five to 10 years and focus 100 percent on building up your U.S. and Canadian and South American operations.”

Neither Beyond Meat nor Impossible Foods has disclosed detailed plans for dealing with the food regulations or marketing to Chinese customers.

Ethan Brown, the chief executive of Beyond Meat (and no relation to his counterpart at Impossible Foods), called the regulatory process “daunting” in an interview last year. But without revealing any specifics, the company said it hoped to begin producing plant-based meat in China by the end of 2020.

Impossible Foods has not committed to a specific timeline. Over the next few months, the company said, it plans to establish a permanent presence in China, moving a senior executive to Hong Kong and hiring staff on the mainland. And this week, Impossible Foods is unveiling a plant-based pork product designed partly to attract Chinese consumers.

Despite the placement of its booth at the trade show in Shanghai, Pat Brown said, Impossible Foods drew long lines and served tens of thousands of samples, including dumplings, meatballs and sliders.

Mr. Brown also said he had met with government officials and business leaders to discuss the regulatory process, though he declined to name them.

One argument Mr. Brown has been making is that a thriving plant-based meat industry would help the Chinese government reduce its reliance on imports. Over the last year and a half, an epidemic of African swine fever has decimated the country’s pork supply, forcing the government to turn to foreign markets to satisfy demand.

“They’re desperately looking for protein of all kinds to supplement that market,” said Derrell Peel, an agricultural economist at Oklahoma State University. “That might make it easier to get some of this through.”

In China, the main body that regulates the food industry, the State Administration for Market Regulation, has classified Beyond Meat’s offerings as bean products and Impossible Foods’ faux meat as a soy product, said Ryan Xue, who runs a local trade group that advocates for protein alternatives.

The trade group, the Plant Based Foods Alliance, is lobbying the government to establish a separate classification for plant-based meat. And Chinese regulators are working on national standards, state media reported on Monday, citing Wang Shouwei, the director of a government-affiliated industry group.

But for now, any foreign company whose plant-based products do not meet the existing standards has to file a petition with regulators or change its formula to get access to the Chinese market.

That process can take years. And while Beyond Meat says its recipe complies with the country’s regulations, Impossible Foods will have to file a “new ingredient” petition to get approval. The Chinese government did not respond to a request for comment.

As that process drags on, a growing number of homegrown companies are developing plant-based meat products designed for Chinese consumers. One vegetarian-protein maker in Shenzhen, Whole Perfect Food, offers a stewed pork meatball that resembles “lion’s head,” a staple of southern Chinese cuisine.

Zhou Qiyu, the marketing manager at Whole Perfect Food, said the major obstacle facing Beyond Meat and Impossible Foods would be “localizing their product offerings and understanding the Chinese consumer.”

In China, meat is often prepared differently from American methods, since many people prefer to eat it off the bone. Zhenmeat, a plant-based meat start-up in Beijing, is using 3-D printers to produce protein alternatives that contain bones, muscle and other structural elements that Chinese consumers expect in their meat.

In November, the cultural challenges that the American companies face were on full display at the VeggieWorld trade show in Beijing, where Beyond Meat served burgers and sausages.

“The texture of the plant-based meat is still not the same,” said one attendee, Luan Yucui, who is cutting down on meat for health reasons.

Yu Dongli, one of the millions of Buddhist vegetarians in China, arrived at the event excited to sample Beyond Meat’s products, partly because she knew Bill Gates, a popular figure in China, had invested in the company. But after examining the long ingredient list on the burger package, she could not tell whether the product complied with the dietary laws of Buddhism, which forbid certain spices and seasonings.

A spokeswoman for Beyond Meat said all the company’s burger ingredients complied with Buddhist laws. But she declined to say whether the company planned to note that on its packaging, as some Chinese plant-based meat providers do.

Chinese perceptions of Impossible Foods’ meat recipe may also be a stumbling block, even if the genetically modified soy wins approval. President Xi Jinping has called genetically modified crops a national priority, and 90 percent of scientists agree that genetically modified organisms are safe to eat. Still, Chinese consumers and even state-run media outlets have often expressed concerns about the safety of genetic engineering.

“Even though you have so many years of testing, so many years of experiments, Chinese consumers still feel uncertain about whether it’s going to cause problems,” said Cong Cao, a professor at the University of Nottingham’s campus in Ningbo, China, who has studied the reception of G.M.O.s in China.

Mr. Brown, the Impossible Foods chief executive, brushed aside those concerns. Over the years, he said, he has worked hard to understand the tastes of Chinese consumers. On previous trips, he would station himself in grocery stores, asking strangers why they had chosen certain products.

There was no time for such grocery reconnaissance during the trip in November. Nor did Mr. Brown do much in the way of sightseeing, apart from an early-morning jog to Beijing’s Tiananmen Square — “against my better judgment,” he said, “because the air quality was pretty bad.”

Mr. Brown plans to return, however. Selling plant-based meat in China will be “super expensive and difficult,” he acknowledged. But then again, so is making meat out of plants.

“Everything’s expensive and difficult,” he said. “Our whole mission is difficult.”