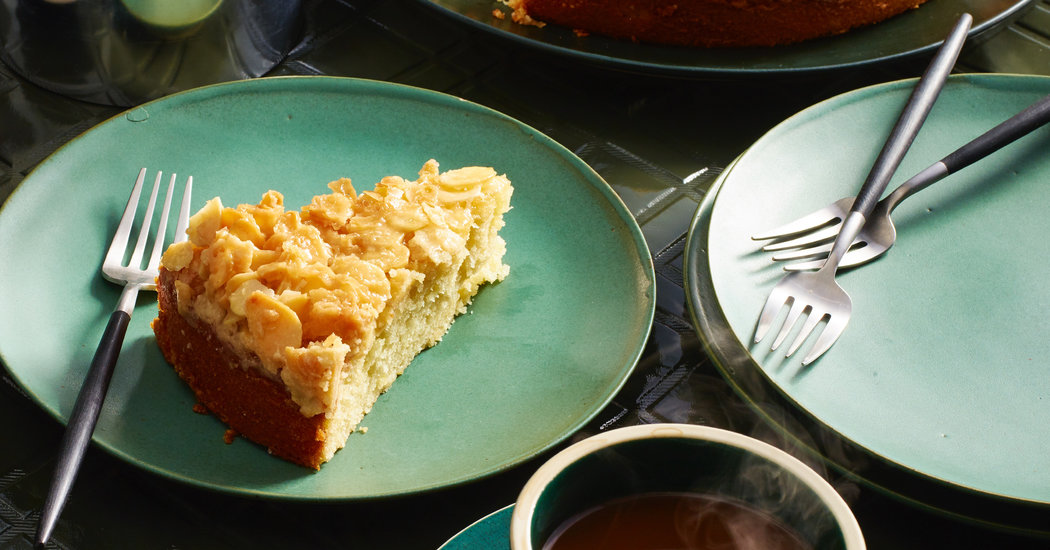 “Coffee and” was an expression I heard all the time as a kid. From early morning until late in the afternoon, the aroma that filled the kitchen, wafted through the living room and wisped its way up the stairs was coffee, Chock Full o’ Nuts specifically. The coffeepot burbled steadily in our house, always ready for the next cup, and at least once a day, one or another of my mom’s friends would knock on the unlocked door, push it open and head for the kitchen, knowing that the percolator would be on the stove and that on the counter there would be cake — the “and” in “coffee and.”

It was a nice part of life on a tree-lined block in Brooklyn, but it didn’t become part of my life. Early on, after a trip to Europe, and in the hope of seeming more sophisticated than I was, I divorced the faithful couple of my childhood: Cake, or dessert of any kind, became a solo pleasure, served as its own course, as it often is abroad, and only then would coffee — freshly ground and made in an espresso pot — follow. But then along came fika, and I had to give “coffee and” a rethink.

If I’d heard of fika before I went to Stockholm last fall, I hadn’t paid much attention to it. I knew it involved coffee — the word fika is a flip of the two syllables in kaffe — but I had no idea that it involved the whole country. And cake. And cookies. And twisted buns filled with cardamom. And more.

Basically, fika is a twice-daily break, a time for a little something sweet, a coffee and conversation. It feels as if just about everyone in Sweden fikas — the word is both a verb and a noun. School kids fika, albeit with milk, and business people fika. In some corporations, showing up to a fika is a requirement. You can fika at home or in a cafe, on weekdays and on weekends, when, as my guide to all things fika, Mia Ohrn, said: “Having people in for a fika is so doable. It’s just coffee and cake. You barely have to put out chairs.”

Ohrn is a pastry chef, a food stylist and a cookbook author. She is also the mother of two little boys, which is one reason she loves fikas: They can include children, she told me. We were in her sun-filled baking studio for a fika of French-press coffee and apple cake, just out of the oven, fragrant with cinnamon and cardamom. Cutting it into hand-holdable squares, she said, “I can’t always pull together a full dinner, but I can always bake a cake like this.”

And, according to Ohrn, lots of other people do too. “We’re a nation of home bakers,” she said, an idea I’d already gotten from reading “Fika: The Swedish Way,” a cookbook that hasn’t been out of print in Swedish since it was first published in 1945 to celebrate the return of butter, sugar, eggs and flour to the markets and bakers to their ovens after World War II. In a country of 10 million, the book — a “Joy of Cooking” for bakers — has sold more than 3.8 million copies; when people say, as Ohrn did, “every house has it,” I believe them.

My copy of the orange-and-white-checked bible is the 2017 English-language edition. And because Ohrn was its recipe editor, I assumed that when I asked her what I should make for my own fika, she would tell me to flip through the almost 300 recipes and choose one. She didn’t. Instead, she told me that she really loves the saffron cake, then added that she really loves the tosca just as much. The tosca is a slightly dense butter cake with an almond topping. It’s a staple throughout Sweden. But because Ohrn had assured me that there aren’t set rules for a fika, I decided to combine the two recipes.

I used the saffron cake as the base, replacing the spice with vanilla. The sponge cake is elemental (the vanilla extract is the fanciest ingredient in the batter); tender, but not insubstantial; and satisfying. It was just as Ohrn had described it: not much to look at but wonderfully moist and buttery. On its own, it could be a house standard, a good-for-anytime cake, but it becomes worthy of a weekend fika with the addition of the tosca’s almonds. The topping, a mixture of butter, flour, sugar and sliced almonds, is simmered on the stove and then spread over the almost-baked cake. Left in the oven for a few minutes, the topping bubbles, the sugar caramelizes and the almonds brown a bit.

When the cake cools, the topping sets and forms a sweet, just-a-little-crackly, just-a-little-chewy caramel shell, a fine companion for the supple cake beneath it. The cake is not fussy and not formal but beautiful in its simplicity. It’s easy to make, keeps well and can be eaten by hand or served on pretty plates. It was as right for my first fika as it was for my second. And I’m sure it would have been just as good for my mom’s “coffee and.” The almond cake is perfect for artisanal coffee or a mug of Chock Full o’ Nuts.

Yes, There will be Vegan Options Again! – columbusunderground