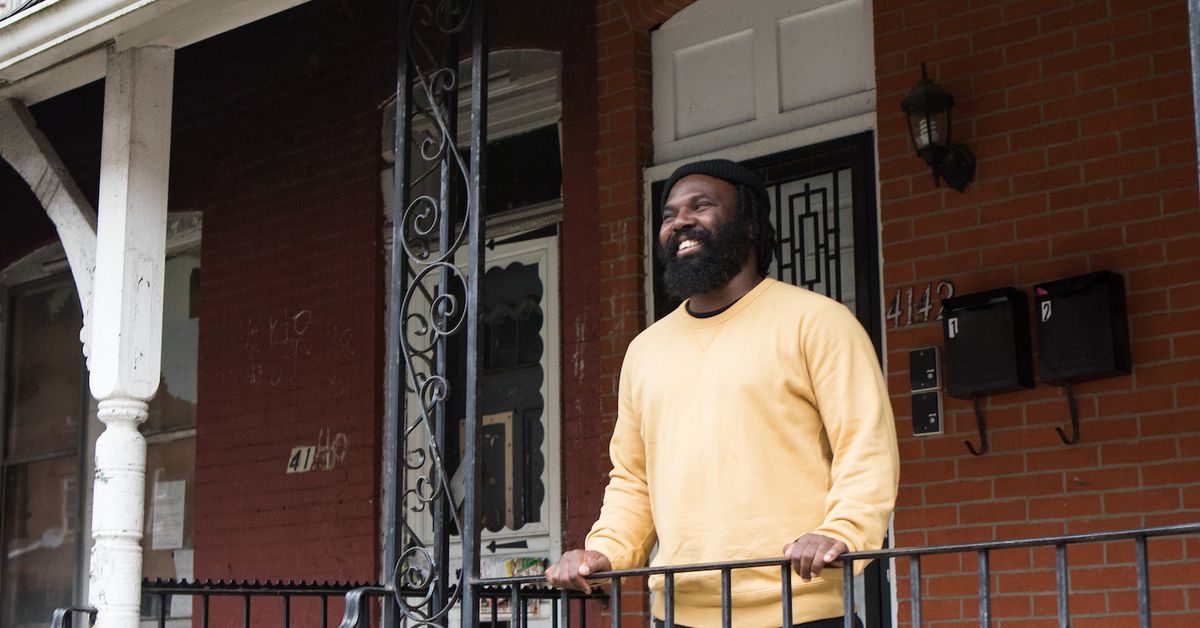 This is Eater Voices, where chefs, restaurateurs, writers, and industry insiders share their perspectives about the food world, tackling a range of topics through the lens of personal experience. First-time writer? Don’t worry, we’ll pair you with an editor to make sure your piece hits the mark. If you want to write an Eater Voices essay, please send us a couple paragraphs explaining what you want to write about and why you are the person to write it to [email protected].

I walk among Giants. I’ve been walking with them for some time now, even before I knew I was. I confer with them often across varied topics, and I have been engaged in this conversation for quite some time.

Somewhere around the fall of 2017 I decided that I was going to put down my knives. Not necessarily forever, but my lack of affection for the restaurant industry led me to hiding them away. I didn’t even sharpen them one last time. They were as dull as my attitude toward cooking, some of them high carbon and rusted over. I placed them in a large white fish tub and left them be.

At the time, I was working as the chef de cuisine of a failing all-day brunch restaurant and cafe in Soho that sometimes did dinner, depending on how desperate the owners were that week for identity, purpose, money, or all three, but most definitely money. We were chasing what Sqirl had in LA, a fun, health-focused California idea of cuisine, but with “New York” attitude, and I just wanted to prove that I could run a successful kitchen. The nature of our service forced me to become a baker — a good one, too. I worked 12-, 15-, 16-, 18-hour days at this place, at times getting into work at 6:30 in the morning and not leaving until 12:30 the next. Soho really needed those scones.

We were cutting hours to save labor. Staff would call out of work and I’d pick up the slack. There was a bit of revolving-door syndrome: We were always behind on something, and it was difficult to be completely set up from day to day because of the structural problems we faced. Getting the restaurant into good shape for service often felt impossible. Looking back on my experience there, I see why this was my final stop.

For a long time I was chasing what I thought was success. At any and every restaurant where I worked, I tried to be the best version of “chef” that I could be. The urgency that I felt to be great at my job was less about wanting to be a boss and more about the possibility of absolute expression. I wanted to be at the top. I wanted to speak loudly in a world that was suffocating its congregate with every attempted breath. In an industry where Black people are invisible, women are target practice, and every and any other culture and ethnicity is sport for white supremacy, how could I possibly think that I would be able to break through that ceiling? The audacity.

How could I possibly believe that any qualifier I met would qualify my presence? I thought that by making it into the arena of top-tier chefs, eventually I would gain a particular access that allows me to express my authentic voice. But this game was never about authenticity. The restaurant industry is cliquish and rife with many “isms.” If you don’t play the game correctly, you could be overlooked or shut out of opportunities completely.

So I left the restaurant industry — and the belief that others held absolute power over me in my career — and my ancestors began to speak to me loudly. The Giants saw me and wanted to help me walk. I listened. I dutifully began reading more and more. Not just cookbooks, but all sorts of things. Old magazines, art portfolios, novels, books on science and philosophy. I wanted to know: Exactly who is this America that I was dealing with?

To understand, I began with myself, my family’s history, and the environment from which they came. I learned about migration patterns. I learned about rail cars, and fancy hats, and Cadillacs being driven back home, from Baltimore and Philadelphia down South, to show off to your kinfolk. I learned about turtles along the Schuylkill River and how to stew them, about catfish and waffles. I learned about the Gullah Geechee and the Sea Islands; I learned about Orangeburgh and Bull Swamp, South Carolina. I touched the soil my enslaved African ancestors walked upon. I spoke to the trees that witnessed their lives.

I found my ancestors’ names in an original pamphlet documenting the first 100 years of the Orangeburg Presbyterian Church in South Carolina. They were listed under the colored congregation of its founding membership in 1835. They were cited as slaves with their given first name and the master’s last name in parentheses next to it. They were branded, labeled “Jamison” like Hellmann’s on mayonnaise. I learned that I could still touch them, that they were still alive.

I also began forming ideas around food that leaned toward the unconventional. Black history through the lens of Black folks is not well documented. It became imperative to not only learn as much as I could about our foodways and food culture, but also to synthesize a shared experience in uniquely visceral ways. Telling stories about our nuance became paramount. For example, I learned of a play written by Paul Laurence Dunbar and William Marion Cook called Clorindy, which was the very first Broadway play to have an entirely Black cast. It was the most successful play in its inaugural year of 1898 and went on to become an international success, becoming popular in Great Britain as well and popularizing the cakewalk dance. The caveat to this story is that the Black cast had to don blackface to perform the play in this vaudeville era of minstrelsy.

Clorindy was conceived by Dunbar and Cook over a shared meal of raw beef, chopped bell peppers and onions, and beer. I needed to find a way to have my diners ingest the weight of this history: In my mind, that inspirational meal evoked tartare, but I decided to make this dish an all-black dish by creating a squid ink dressing to hide all of its beauty, much like blackface tried to hide Clorindy’s original cast.

I learned of many more nuanced things from obscure resources such as novels, pamphlets, and paintings, things like coon-dick (a type of moonshine), or cured sausages “accidentally” fermented over winter to be rationed out over time in the cabins and shacks of Black farmers. Both became similarly drawn-out themes for dishes.

I learned about the science of the intentional exploitation of Africa, I learned that even the largest slave ship couldn’t carry enough bodies to satisfy colonial greed. I learned manipulation and how to identify it. I learned how to harness it for myself for education and persuasion. I became who I wanted to be. I’m still becoming myself. When I think of the word “chef” now, my thoughts cease and I go flat. I have to be an artist because food is so much more than we believe.

Every carrot, onion, or piece of celery carries within it the trillions of years of our universe as we understand it. It’s a shame the lack of responsibility we feel for respecting that which comes from the dirt, from nothing.

Or maybe I feel so strongly about it because I came from the mud, from the nothing. I am the little ghetto boy from the ghetto streets that Curtis Mayfield sang about. And all I ever wanted was for someone to water my seed, to bloom for you. For my thoughts to snap crisply in your mind like the bite of an apple, to waft into your nostrils like the smell of good fried chicken.

To skillfully execute the beauty of our America skillfully to your plate, the Giants helped me walk. They confirmed my education. They told me that I could, that my story was important. The Giants among us are writers, artists, chefs, farmers, and scholars. They are pastors, preachers, elders, and officers of all kinds. Sometimes we pass them in their plain clothes as we cross the streets. They are not perfect; they are Giant. The Giants are children in the schoolyard who can still see the visions in the clouds and the teenagers who are now forging their own path. I listen to them all. They have all brought me up. Not from the bootstraps — we are cobblers. We make our own boots to strap up because you can’t buy shoes fit for a giant. They must be made.

To become a cobbler I needed to go back home, to Philadelphia, into the headspace of the young boy whose imagination was roaring. The young boy who used to open his front door to the smell of honeysuckle flowers infiltrating his senses. It was there where I was groomed to be a “shoemaker,” and I was called back to all of my life experiences around food. From the smell of my mother’s fried fish, or the sound of a spoon stirring Kool-Aid in our plastic pitcher, to standing on the corner with my friends eating a deli sandwich. All of my food experiences became relevant. All of those stories mattered because they were my truth.

In the early winter of 2018 I opened up that old fish tub and sharpened my knives, scrubbed off the rust, and began cooking again, with more fervor and attention than before. I’ve been able to master the intent of each slice to tell the guest exactly what they need to hear. I began a dinner series called Honeysuckle to talk you about it, a pop-up dinner series that explores the continuing narrative of the Black existence through food and storytelling. It is rooted in the soils of my foundations here in America, and it uses that foundation to build upon the nuances of our history and our present. Eventually it will grow into the institution, where I will hope to be able to continue this practice for years to come.

Omar Tate is the chef and artist behind Honeysuckle, a dinner pop-up series dedicated to exploring Black heritage and culture through food. He uses history and various forms of art to tell the nuanced stories of Black folks with his guests.
Clay Williams is a Brooklyn-based photographer.