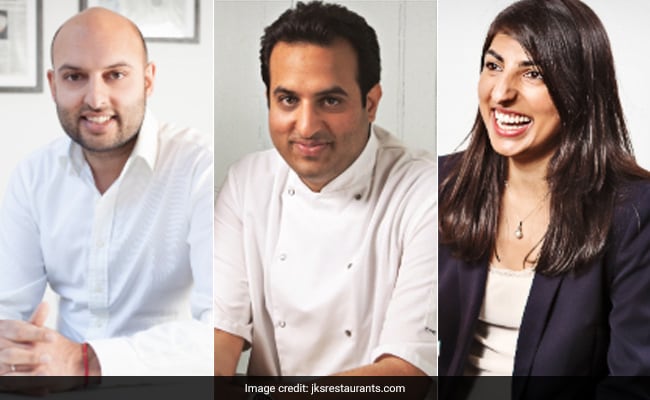 You can face a lengthy wait in electronic queues for a table at Hoppers, a Sri Lankan restaurant in London’s Soho, or for Chinese dumplings at nearby Bao.

Want to eat right now? Good luck. You could try for Spanish fare at Sabor. The upstairs dining room is often full, and seats at the ground-floor counter are first-come-first-served. Other options, if you can get in, include European cooking at Kitchen Table; a British menu at Lyle’s; hot dogs at Bubbledogs; Persian cuisine at Berenjak; Taiwanese specialties at Xu or Indian cuisine at Trishna and Brigadiers or at Michelin-starred Gymkhana in Mayfair (which is scheduled to reopen in mid-February after a fire).

These are among the U.K.’s hottest restaurants and all are part of a group owned by three siblings who were born to an Indian family in North London. Jyotin, Karam and Sunaina Sethi are the trio whose initials make up JKS Restaurants and they are changing the way London eats: Championing diverse cuisines and offering a fresh approach, with differing styles and prices.

New York restaurateur Danny Meyer, known for establishments such as Gramercy Tavern and Union Square Cafe, is a fan.

“Restaurant groups can be a lot like music labels,” he says. “Each new song or album they produce-and the talent they attract-tells a defining story and expresses a singular thumbprint. In the case of JKS Restaurants, every single album I’ve ever heard says something that is very fresh and surprising and excellent and welcoming. Each song makes you want to go back for another listen, and each listen makes you happy to be alive.”

But JKS wasn’t an overnight success. It took three years for the first restaurant, Trishna, which opened in 2008, to turn a profit.

“Now, when we open a restaurant, we want to be profitable in month two,” Jyotin says.

OK, the restaurants aren’t revolutionary. And the group, with 15 outlets (soon to be 16) and 13 brands, all in London, is a minnow compared with companies such as D&D London, which has more than 40 restaurants and has expanded to the U.S.; and Caprice Group, which is rolling out its Ivy Collection across the U.K.

If there is a secret to JKS’s success, it may be the diverse range of skills the siblings bring to the table.

Big brother Karam studied business management and spent a year in the kitchens at the ITC Maurya Sheraton, in New Delhi-home to the acclaimed restaurants Bukhara and Dum Pukht-learning to cook. He went on to open a catering company and is an accomplished and creative chef with a good understanding of business.

Jyotin is a former private equity investor and runs the business as CEO. He joined the Barclays graduate program in 2002, spending almost a decade with the bank, working for Barclays Ventures, the private equity arm. The family funded Trishna themselves, and then brought in friends and family as investors in 2012 to expand the group. (The family subsequently bought out the investors.)

Sunaina spent time with banks HSBC and Sal. Oppenheim in Frankfurt while at business school and joined JKS straight from Nottingham University. She was in charge of the wine buying and front of house operations as the group expanded. She went on maternity leave last year and her focus now is on people, beverages, training and charity.

So how easy is it for her to work with her brothers?

“It’s great because your interests are aligned and if at any point they are not, it is quite easy to solve things,” she says. “There are no politics. You sit round a table and shout it out but you come to a solution quickly. We all have quite specific skill sets and areas of the business we look after and trust each other.”

The group was founded when Karam came up with the idea of creating a London version of Trishna, one of the most-loved restaurants in Mumbai. It was a modest start. The Trishna name helped get the critics in, but they were lukewarm and the response from diners was not a whole lot better. Opening into an economic slowdown didn’t help, either.

“Trishna was a big learning curve,” Karam says. “We made the mistake of Anglicizing it a bit too much, catering to the local palate versus keeping it punchy, keeping it bold, keeping it really classic as such. It was a tricky 18 months. We were very much unknown.”

The next step was to open Bubbledogs (serving hot dogs and Champagne) in August 2012 along with a fine-dining restaurant called Kitchen Table hidden out back. That got the attention of some high-profile restaurateurs, including New York’s Meyer. But the breakthrough came with Gymkhana, an Indian restaurant in Mayfair, the following year.

Critics heaped praise on Gymkhana, which won U.K. Restaurant of the Year and a Michelin star in its first year. Kitchen Table now holds two stars.

“We never looked to reinvent the wheel,” Karam says. “The flavors, the spicing, were always kept as classic and as you would find in India but there’s little slight tweaks and slight little bits of originality. It’s classic flavors but with seasonal British produce. Gymkhana was the torch-bearer. Once other operators saw the success of Gymkhana, the Indian scene has exploded.”

The variety the company is offering in terms of cuisines, styles and price points is dizzying, but the restaurants are in two main groups: Those directly owned and managed by JKS (Brigadiers, Gymkhana, Hoppers, Trishna and the home-delivery Motu service); and collaborations with partners (Bao, Berenjak, Bubbledogs & Kitchen Table, Flor, Lyle’s, Sabor and Xu.) There are two branches of Hoppers and three of Bao, with a further one of each set to open in coming months.

“Our staff are all very young and hungry,” Karam says. “You get a modern-day London experience.”

“A lot of it is to do with what naturally comes to us, the food that we love to eat. When it comes to collaborating with our partners, we work very closely. We won’t open a restaurant with a partner unless we build a relationship with them. And it is typically a year before we actually open with them, so we help build the style and create the whole thing.

“We built an infrastructure in our head office where the partners can focus on precisely what they are good at-cooking, service, the wine, running that site-and the finance, the HR, the marketing, the reservation, the property, the maintenance, all that headache is taken off their shoulders.”

And how are things working out financially? Very well, according to Jyotin.

“All our sites make money and are self-funding on an operating basis,” he says. “As a group, when we deduct head office, we are profitable. All our dishes and drinks are costed before putting anything on the menu. We think very carefully about each and every property deal.” He says sales for 2019 will be about £35 million, up from £25 million a year earlier.

“The thing about restaurants is, people get carried away with emotion: They get caught up in the excitement, they have all their friends down, they spend a load of money and it’s like inviting people home for a dinner party,” he says. “They get obsessed with that whole buzz about it. I am able to emotionally detach myself from it and ask: Is it working and what can we do that’s better to make sure our business is protected?”

“Jyotin oversees the business,” Sunaina says. “He is making sure Karam and I don’t spend too much money.” (And just in case you think three family members isn’t enough, Sunaina’s husband, Karan Gokani, looks after the Hoppers restaurants.)

The siblings’ ability to spot talent is another key to their success. Partners including the power couple Sandia Chang and James Knappett at Bubbledogs/Kitchen Table; another family (Erchen Chang, her husband Shing Tat Chung and his sister Wai Ting Chung) at Bao and Xu; and chefs Nieves Barragan (Sabor) and James Lowe (Lyle’s) with their friends and business partners.

“Before I even knew what JKS was, I knew Bubbledogs and fell in love with James and Sandia,” Meyer says. “Then there was Hoppers and the amazing Karan Gokani. And then when you experience Lyles, and Gymkhana, and Brigadiers and Sabor, and you stop and realize that each one of these place-making places are all peas from the same garden, you have no choice but to stand up and salute.”

So what’s next? JKS is planning to add about five more sites this year, including a gastropub.

Building back better on food and agriculture – Times of India