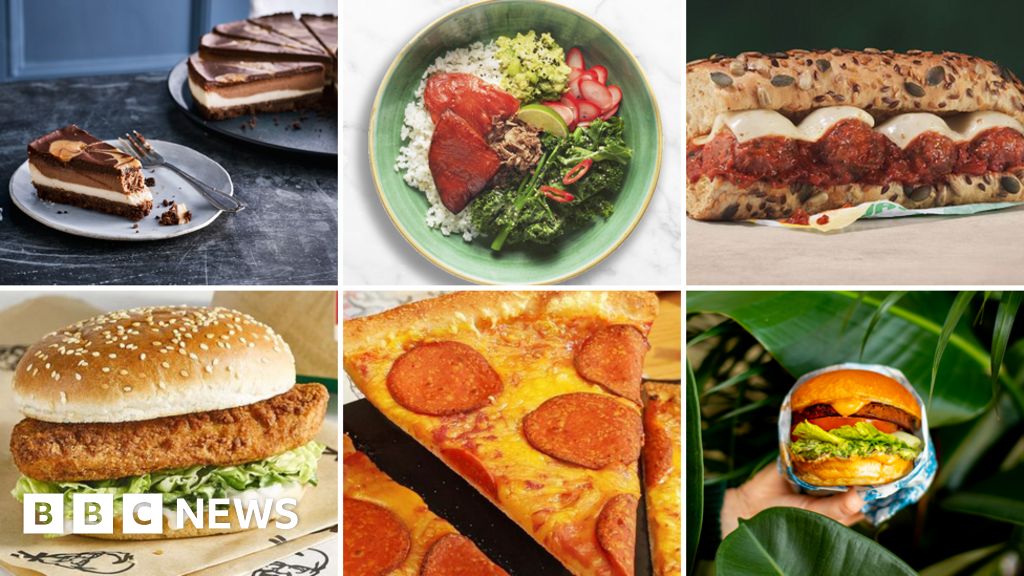 Hundreds of restaurants have launched tasty plant-based treats in conjunction with Veganuary, a campaign encouraging people to follow a vegan diet for the first month of the year. From pea protein pepperoni to watermelon steak, will any new products rival Greggs’s vegan sausage roll success from last year?

Late at night on New Year’s Day, dozens of people queued up outside the Greggs on Grainger Street in Newcastle to be among the first foodies to taste the new vegan steak bake before it was first available to buy on 2 January.

Food blogger Emma Phillips had been invited to the event by Greggs as a peace offering after she ate a non-vegan doughnut that had been mistakenly labelled as vegan.

The 40-year-old from Gateshead said the launch became “quite an experience” after various partygoers joined the queue to see what all the fuss was about.

“Bearing in mind it was New Year’s Day, the Greggs in particular that they chose was on the corner beside quite a notorious area of Newcastle for revellers, shall we say – so a lot of quite inebriated people were walking past,” Emma said.

After a bit of “ribbing” from non-vegan passersby, “they started to join the queue as well”.

Inside, people were rewarded for their wait with trays of steak bakes, a DJ, and some iPads were even given away, Emma said.

But Greggs knows how much one star snack can bolster an entire brand.

After Piers Morgan criticised the vegan sausage roll when it launched during the 2019 edition of Veganuary, Greggs’s marketing team jumped for joy.

The roll became one of the fastest selling Greggs products for years and helped to contribute to what was described as a “phenomenal year” by the company’s chief executive.

So, it’s safe to say that food chains have realised there is money to be made out of Veganuary.

Food outlets jumping on the bandwagon include Wagamama, which has launched a “tuna” steak made of watermelon, Subway with its Meatless Meatball Marinara and Costa Coffee with its ham and cheese toastie – free from ham and, er, cheese.

Caffe Nero has launched an entire new menu to help people get through the 31-day challenge – complete with raspberry croissants and “meatball” paninis.

Pizza Hut, meanwhile, says it hopes its Veganuary special, a pepperoni-style pizza made from pea protein, will “appease” – oh dear – ” even the greatest meat lovers”.

So far this year the pizza chain says it has sold an average of 1,400 vegan pizzas a day – up 50% on January last year.

And Leon says its new chipotle and avocado burger has sold better than expected. The fast food chain’s vegan burgers are now out-selling other burgers.

Dominos has confirmed rumours it is “getting there” with developing a vegan pizza – but it looks like it is going to miss the chance to make the most of the Veganuary hype.

Alison Rabschnuk from the Good Food Institute says the timing of Veganuary is “perfect” for businesses.

“Health concerns are the primary consumer motivation for eating vegan and January is the number one month for new health-related resolutions,” she says.

But she also points out that not all vegan food has to be healthy – and new foods might actually sell better if they are marketed as an indulgent treat.

“Scream flavour and whisper health” is Alison’s advice. “The fact that a dish is plant-based is what cues health for the customer – there’s no need to overemphasise that point.”

Veganuary launched in 2014 as a non-profit organisation encouraging people to try out being vegan in the first month of the year by signing the Veganuary pledge.

It also supports businesses to develop plant-based products “as a way of protecting the environment, preventing animal suffering and improving the health of millions of people”.

The campaign claims 200 new vegan products were launched by restaurants and supermarkets at last year’s event, when 250,000 people made the pledge.

This year is even bigger.

The number of sign-ups has already surpassed 370,000 (including 150,000 in the UK) and is “steadily rising”, according to Veganuary’s head of marketing, Toni Vernelli – who adds the “huge response” shows the “positive action” of the campaign is “exactly what many people need right now”.

While making money from vegan foods at this time of year should therefore be easy, some food outlets have faced barriers.

Burger King cooked up a storm with its January roll-out of the Rebel Whopper which, although made of a plant-based patty, is not strictly suitable for vegans or vegetarians because it is cooked alongside meat products.

But the Veganuary team has defended the new burger and warned non-vegan customers not to get too picky.

It argues animals are better off with non-vegans eating plant-based burgers, even if they’re cooked alongside their meaty counterparts.

PETA has also urged vegans to accept this kind of practice because otherwise restaurants will be put off making vegan products.

The risk of cross-contamination posed by the Rebel Whopper is one of several issues fast food chains encounter when rolling out vegan products.

Another problem for full-time vegans is whether or not to buy food from restaurants which make most of their fortune from meat.

Vegan social influencer Emily Woolnough has been grappling with this question for a while.

When KFC trialled a vegan burger last year, the 20-year-old from Cleethorpes refused to eat it.

“I was against buying something from KFC because they kill millions of chickens… [and] I don’t want my money to be going into that,” she said.

But by the time the zero chicken burger launched across the UK on 2 January, Emily had listened to other influencers and had a change of heart.

“It’s good to increase the demand for vegan food,” she says – adding that the “amazing” KFC burger is her favourite Veganuary product because “it tastes so realistic”.

Emma Phillips agrees it’s the multinational big cheeses who will really be able to drive veganism to become mainstream.

“They’re not bothered about the animals… but I don’t care,” she says. “No business is there in an altruistic sense. For me, if veganism is to become mainstream… it has to be convenient, it has to be accessible. So the likes of Greggs and KFC are actually pushing that agenda in the way a niche movement wouldn’t do.”

Toni Vernelli, head of communications at Veganuary, agrees with the bloggers about sometimes-demonised business such as KFC, McDonalds and Burger King. “We don’t think we can achieve a vegan world without them,” she says.

She points out the huge advertising budgets and overflowing budgets enjoyed by these companies and says, with increased demand, industry giants might invest in growing their vegan menus.

While they may not want to be too closely aligned with a store that sells 1.5m pork sausage rolls every week, Emma and Emily do have one thing in common with Greggs – they’re all profiting from Veganuary.

Emma says she got 1,000 new followers in the first week of January.

And part-time Starbucks worker Emily, whose @naturally_vegan Instagram page is smaller than Emma’s @veganwomble account, has still had about twice the number of new followers in the first week of January compared with her weekly average.

“It’s the hot topic at the minute, it’s what everyone’s talking about.”

Coronavirus lockdown | With no work or food, workers brave the long march home from Uttar Pradesh – The Hindu