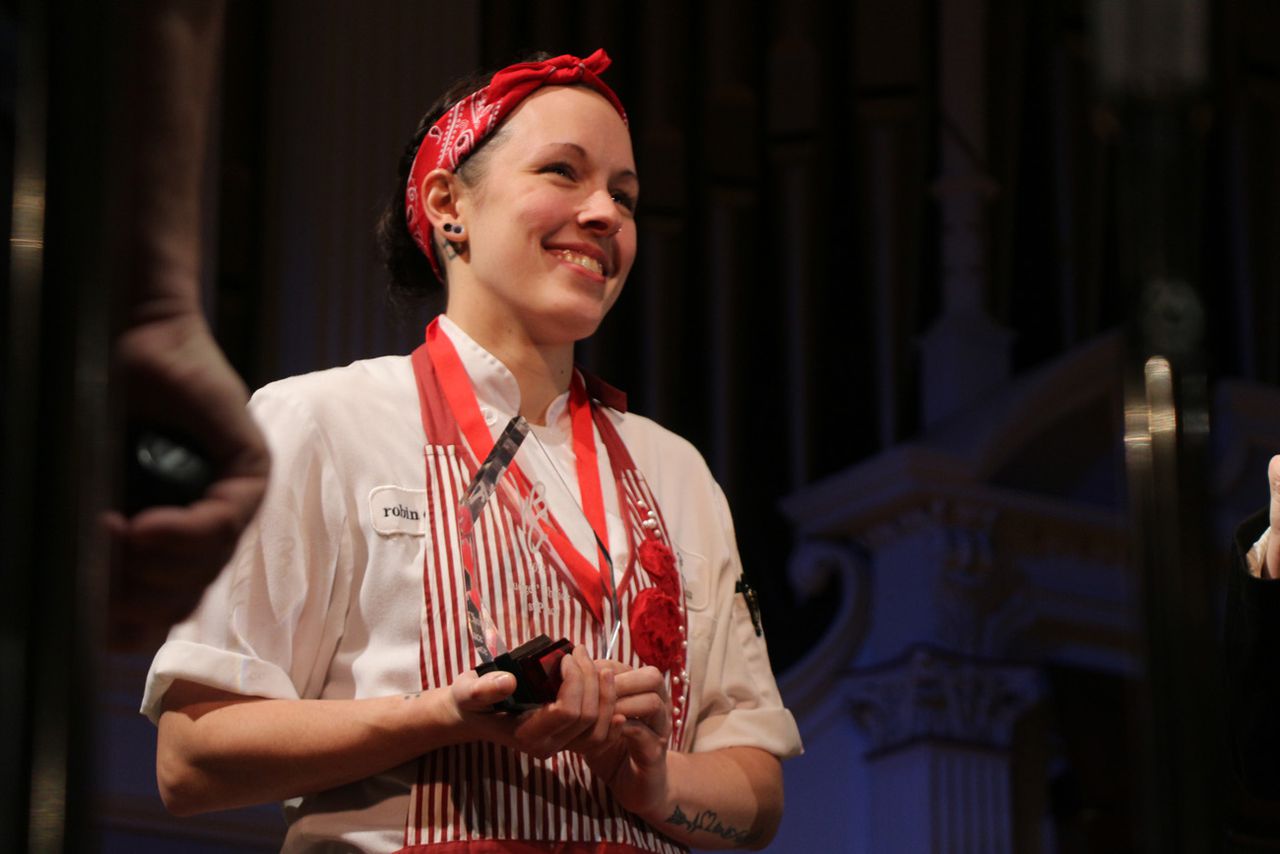 Worcester chef Robin Clark still feels the sting of a second-place win in her recent appearance on Food Network’s “Chopped,” but says the experience gave her a confidence boost she needed to be a better chef and a better leader.

Clark, of Niche Hospitality Group, competed on the show which aired Tuesday night. But for Clark, it’s been more than a year since the day she filmed the episode. In fact, she took part in the show in June 2018.

“It was probably, in a nutshell, the hardest and best day of my life,” said Clark. “I would do it all again in a heartbeat.”

Clark never thought she would end up on the show and said it didn’t end up feeling real until she stepped on the set.

She faced off against Chris Kollar, who is the owner and chocolatier of Kollar Chocolates in Yontville, California., Nick Cassidy, a corporate executive chef from Philadelphia, Pennsylvania, and Koji Kakimoto of Honu Kitchen & Cocktails EC in Huntington, New York.

Her appetizer course, fried shishito peppers with bastilla salsa verde, and her main course, a pan-roasted rabbit loin with everything bagel doughnut sauce, impressed judges and got her to the final round.

Her dessert, a miso ice cream, drew some mixed reviews from the judges. Celebrity judge Martha Stewart thought it was too salty, while judge Maneet Chauhan enjoyed it.

Clark said that the stress of standing over the mystery basket can unnerve even the most collected chefs. She recalled having a tough time with the bastilla pastry in the first round, the everything bagel donuts in the second and the strawberry pretzel gelatin in the finale.

She said that the stress lasted all day within the heat of the competition of a cooking all day.

Clark added that she was worried about how she would be portrayed on the show, especially after feeling rough about the runner-up outcome, but said that the show made her look great and gave her an incredible confidence boost.

“I think I took away from it, especially now, too, that so much confidence in myself and abilities and, you know, sort of just validation for how hard I’ve worked and how much I’ve sacrificed to get where I’m at in my career,” she said.

“Yeah, you know, maybe I didn’t win, but I got to cook all three rounds, and even just then in of itself, you know that you did everything that you possibly could and now it’s in the judges hands,” she added.

Clark said she and Kollar talked after the show and reminded each other that the show isn’t a judge of how good a chef one is, but how well one plays the game.

“I didn’t taste the ice cream when it came out of the machine once it was finished, so I didn’t know how salty it was,” she said. “And maybe if I did it could have been difference, and trust me, I’ve been thinking that every day for the past year.”

Clark said that it was a close race and up until the airing of the show she felt like she messed up and lost by a long shot. Only when she saw her performance and portrayal in the show did she realize how much she shined.

“Getting to sit back and watch the episode, it really made me feel like ‘Wow, I was really close. I did better than almost I thought I did,’” she said.

Clark’s sights are now set on endeavors closer to home.

She’ll be taking part in Worcester’s Best Chef this month and is hoping to dominate the competition.

Despite the stress, Clark said she would be more than willing to appear on a redemption episode of ‘Chopped.”

“It was such a whirlwind of a day and it was such an amazing experience and it’s so insane to see yourself on the television,” she said.

For now, she’s hoping the squeeze as much out of the adrenaline rush as she can.