A customer at the popular Nusr-Et steakhouse in Miami, owned by the Instagram star known as Salt Bae, had the cops called on him after he disputed a whopping $5,000 bill.

Duane Miranda said he was stunned after seeing the massive bill at the end of his group’s luxurious meal last month at the swanky restaurant, according to the Miami Herald.

Nusr-Et is known for its signature tomahawk steaks, in which the meat is cut tableside in performative fashion. The restaurant’s owner, Turkish chef Nusret Gökçe, performs the task himself on nights he’s in town.

Gökçe earned the nickname Salt Bae after going viral on Instagram for the culinary routine, in which he artfully cuts the meat and garnishes it with salt. The gimmick has made him a social media and international sensation, and he has restaurants around the globe, including in New York City, Mykonos, Dubai and Istanbul. 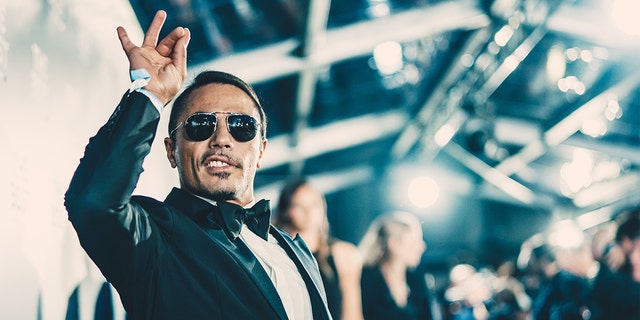 But Miranda is now on a mission to expose Nusr-Et after his dramatic dispute with the restaurant.

“I think they’re out to victimize their customers,” Miranda said. “It’s a bait-and-switch.”

RESTAURANT OWNER CALLS OUT ALLEGED DINE-AND-DASHERS, LIKENS SELF TO SUPERHERO ON FACEBOOK

On Dec. 28, 2019, Miranda and his party of three couples dined at the Miami location, where they ordered a pair of steaks and a rack of lamb. Where things get completed is when Miranda claims the staff insisted that they order the “golden” option, in which the meats are wrapped in an edible 24-karat gold leaf.

What Miranda didn’t know, he said, was that the gold option came with an upcharge, costing $1,000 each. The standard tomahawk steaks are considerably cheaper at $275 each.

When the couples refused to pay until the manager adjusted the hefty bill, the police were called. The party ended up paying the bill to avoid further conflict.

Miranda, who said he was “flabbergasted” by the incident, has since taken to social media and several online review sites to call out Salt Bae and his culinary empire.

The restaurant stands by the bill, pointing out that all of its prices are clearly marked on its menus. The general manager, identified only as Oguz, also claims the couples threatened to leave without paying the bill.

Miranda said he is no stranger to dropping big bucks for services, including a boys’ night at a night club where they ordered bottles costing $2,400. The difference, he claims, is that Nusr-Et did not tell them about the upcharge.

This isn’t the first time the restaurant has encountered similar disputes.

Miami police were reportedly called to the restaurant at least 12 times when a customer disputed a bill. Outraged diners have also taken to social media to post pictures of their jaw-dropping receipts.

Miranda said he has since asked American Express to dispute the charge.

As for what was left of the four-figure meal, Miranda said he took home both foot-long tomahawk bones that come with the steak — one of which was for his friend’s dog. The other he plans to have tested to see if the gold left on it is actually 24 karats.

The Restaurant Revitalization Fund: What Restaurant Owners Should Know – Eater