Skip to content
NEW DELHI: Retail inflation rose to a 65-month high in December on the back of soaring vegetable prices as food inflation hit an over six-year high, prompting economists to predict that the Reserve Bank of India (RBI) will continue with its pause on interest rates.

Date released by the National Statistical Office (NSO) on Monday showed retail inflation as measured by the consumer price index rose to an over five year-high of 7.4% in December, higher than the previous month’s 5.5% and way above the 2.1% recorded in December 2018.

This is the highest since 7.4% recorded in July 2014. For the first time since July 2016, the inflation figure shot past the 6% upper band of the central bank’s comfort zone. 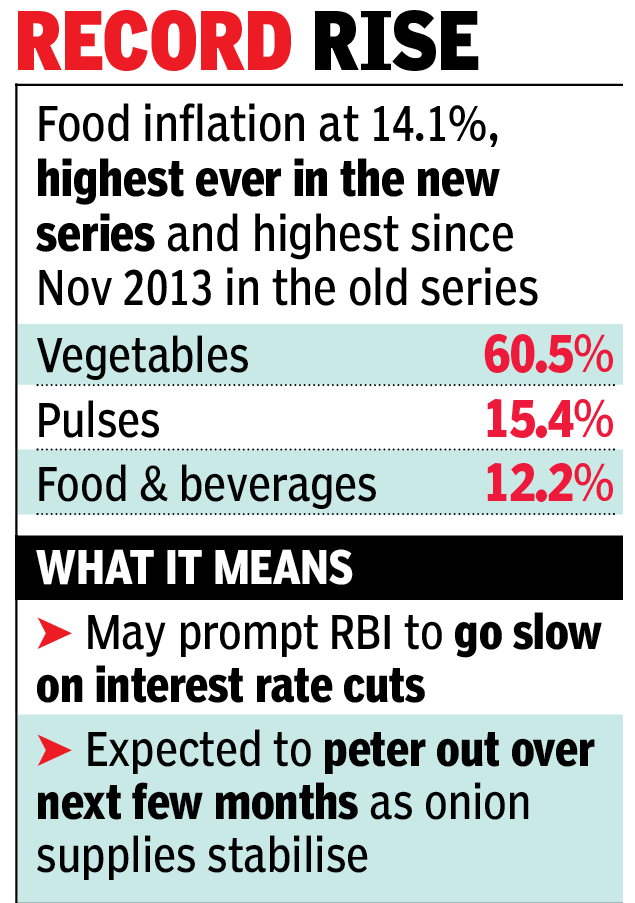 The latest numbers comes as a double whammy for the BJP government, which is battling slowing growth that is estimated at an 11-year low of 5%.

The overall inflation rate is the highest since the BJP government took office in May 2014. The Modi administration was so far successful in containing inflation at low levels for a significant period, providing headroom to the central bank to cut rates to accelerate growth.

The key reason for the sharp spike has been prices of vegetables and pulses. Vegetable prices rose an annual 60.5%, largely driven by onions, and prices of pulses by 15.4%. The government expects overall inflation to moderate in the coming months as supplies improve.

The food price index rose 14.1% during December, the highest in the new series, which was introduced in January 2014. It was the highest in nearly six years since November 2013 when it had soared to 15.4% in the old series which had 2010 as the base year, according to official data.

Core inflation, which is minus food and fuel, too rose marginally to 3.7% in December, compared with 3.5% in the previous month.

The inflation numbers come ahead of the February 1 budget which is expected to unveil fresh measures to boost growth.

Economists attributed the sharp spike to higher vegetable prices, which are at a six-year high, while pulses shot up to a three-year high.

“While food inflation has ascended to double digits, it is not broad-based. It is specifically in vegetables, followed by pulses, which are behind the surge. If you exclude them, food inflation is still 5%, which is a 33-month high,” said DK Joshi, chief economist at ratings agency Crisil.

Economists also said a sharp spike in the transport and communication segment added to the inflationary pressure. They said they expect inflation to remain at elevated levels although moderation in onion and potato prices may help ease overall inflation.

“Considering the higher than targeted level of inflation and the fiscal challenges with regard to the government surpassing its fiscal deficit target, the RBI is likely to maintain its status quo on the policy rates in the forthcoming policy meeting. Going ahead, RBI’s monetary policy would remain contingent on the inflation trajectory and the government’s fiscal stance,” said Madan Sabnavis, chief economist at CARE Ratings.