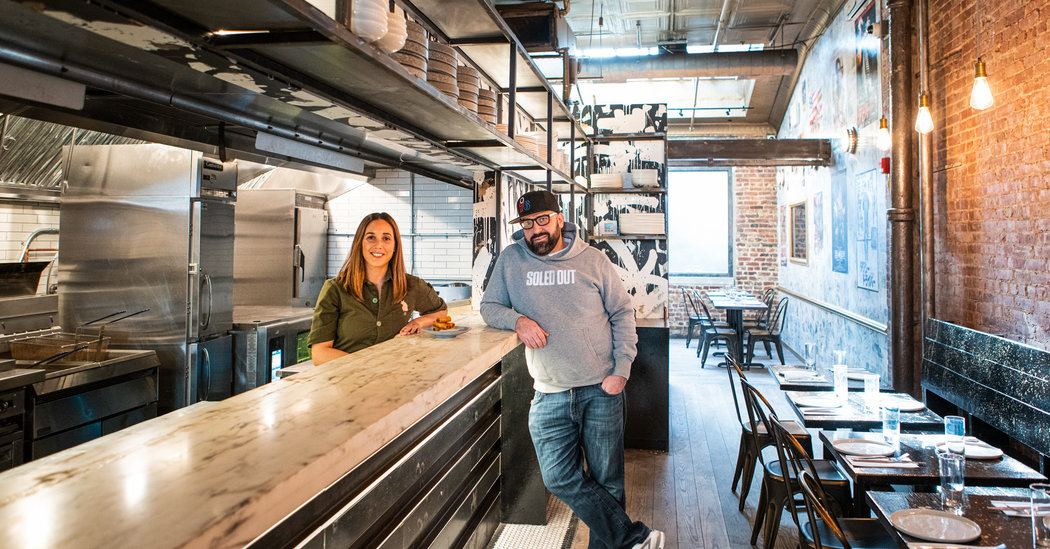 Leah Cohen’s latest has a broader scope than her Lower East Side spot, Pig and Khao. “The food at Pig and Khao is from Southeast Asia,” she said. Piggyback NYC’s focus is “all over Asia except India, and is inspired by our travels.” This new spot in Chelsea features Chinese dishes like a Hainanese duck with a rice cake and two sauces, as well as Filipino lumpia done Shanghai-style, and Korean wings with gochujang sauce. Still, Ms. Cohen’s menu makes several stops in Southeast Asia: Vietnam for her take on the fish and herb dish cha ca la vong, Thailand for fried rice and Indonesia for lamb rendang. The restaurant has a narrow, brick-walled space with a bar and some tables, and a kitchen pass-through that opens into a bright, airy and informal dining room whose walls Ms. Cohen’s husband and partner, Ben Byruch, papered with Asian newspapers and advertisements. Butterfly pea flower, Thai basil and gochujang season some cocktails.

Natalie Hernandez, a Texan with a background in fashion, offers her take on home-style Mexican cooking at this Brooklyn spot. Though vegetables are featured in much of the food, her signature dish is a quesadilla with crisp chicharrónes, salsa verde and white onions. The small restaurant is decorated to evoke the colorful colonial city San Miguel de Allende, Mexico, where most of her family lives.

It’s not the first time that Fany Gerson, the maker of Mexican sweets, has teamed up with Danny Mena, the chef who was an owner of Hecho en Dumbo and now runs La Loncheria in Bushwick, Brooklyn. Last year, she created frozen paletas that were served at La Loncheria. Now they’re simmering pozole in several guises and serving them at a pop-up they created at Ms. Gerson’s La Newyorkina, to be open at least until March 21.

Omar Hernandez, the restaurateur and night-life entrepreneur who lent a downtown vibe to the upstairs room at Vaucluse on the Upper East Side, is opening a nightclub and a dining club. Wednesdays through Saturdays, a $200 fee will cover entertainment and a four-course tasting menu from the young chef Flynn McGarry of Gem, around the corner from Omar’s. A downstairs lounge and disco is open for late-night partying. (Opens Wednesday)

Don Pham has brought his innovative sushi omakase to the Upper West Side. Like the original on the Upper East Side, this location offers 15- and 16-course menus for $125 and $155, with traditional items like pen shell scallops with yuzu zest, and chawanmushi with mushrooms, and more unusual preparations like cod milt tempura, and sweet shrimp with bottarga and foie gras. There are 12 seats at the counter, in a pale, restful setting. (Wednesday)

The charming little Parisian-style sandwich shop in the East Village has opened an uptown branch. As at the original, French newsprint pages have been glued to the walls, and the baguettes are baked by Orwashers, according to the owners’ recipe. But at this larger location, there is room for a few desserts.

Wines with the prices per glass written directly on the bottles, and small plates like smoked salmon rillettes, oysters and beef tongue escabeche are served at this intimate bar from Four Happy Men Hospitality.

A casual spot that was called Artisan’s Gate, named for a nearby entrance to Central Park, is now an updated all-day, all-purpose diner. (Wednesday)

Restaurants on the Move

Instead of trying to run two separate restaurants, the Grill and the Pool, in the former Four Seasons restaurant space, Major Food Group has merged them, and is serving the meat-focused Continental menu from the Grill, the more popular of the two, in both rooms. A few highlights from the Pool remain on the menu, including the caviar service, the halibut with fennel sauce and clams, the beet mille-feuille and the turbot. When making reservations, customers can request either room. Jeff Zalaznick, the managing partner of Major Food Group, said the decision came in conjunction with physical changes in the Pool lounge that had to be made to satisfy the Landmarks Preservation Commission, which has listed the restaurant’s 1959 interior as a landmark. The lounge area is to reopen at the end of the month.

This casual place with vibrant Northern Chinese food, including pancakes and lamb specialties, has moved to a new, similar storefront.

This ambitious multilevel Midtown Manhattan branch of the Beijing roast-duck chain has closed after a little less than two years. The restaurant, from the chef and restaurateur Dong Zhenjiang, who has opened more than 20 restaurants in China in the past 24 years, was the chain’s first location in the United States. It got off to a bad start with devastating notices, including a zero-star review by Pete Wells in The New York Times. More recently, it declared bankruptcy, and its furnishings will be sold at auction.

The birthday of the poet Robert Burns, Jan. 25, is usually celebrated as Burns Night. But this year, the 260th anniversary, there will be a Burns brunch, complete with bagpipes, a haggis ceremony, Scotch eggs, poetry, plenty of whisky and Andrew Weir of the movie “Braveheart” on hand.

Learn to Pair Wine With Food – The New York Times