By Faith Ridler For Mailonline

A former make-up artist has taught herself how to make incredible 3D animal cakes which are so realistic people often ‘feel cruel eating them’.

Molly Robbins, 28, from Lancashire, can spend up to a week on each tasty creation, which range from replicas of beloved pets to models of wild animals such as giraffes, monkeys and elephants.

The talented baker, who trained as a special effects make-up artist, also travels the world teaching others how to bake their own masterpieces – but has admitted customers are often reluctant to eat her cakes because they look so realistic.

She said: ‘I have made most types of animal cakes, the most popular seem to be replicas of peoples dogs, although they tend not to get eaten as people feel cruel eating them. 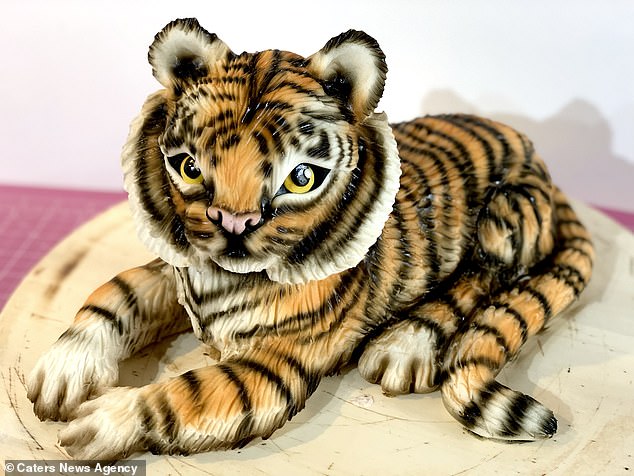 Molly Robbins, from Lancashire, sculpts incredible 3D animal cakes including those depicting wild animals such as a tiger (pictured) 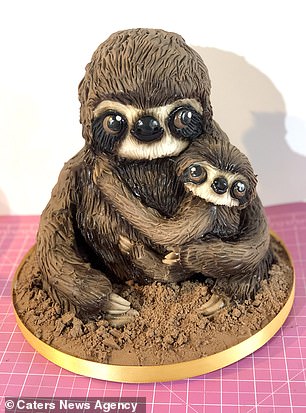 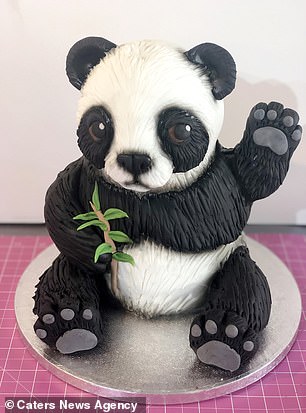 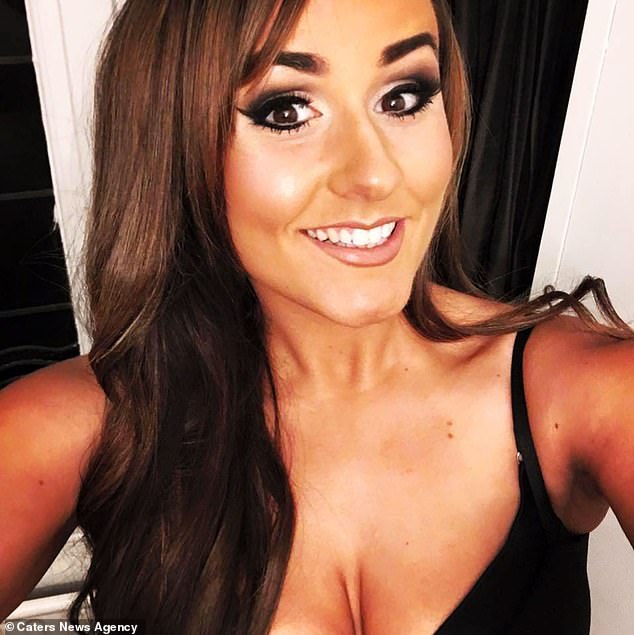 Molly, who trained as a special effects make-up artist, also travels the world teaching others how to bake their own masterpieces

‘They vary, mainly due to the size and complexity. Sometimes they can take an hour or so, sometimes up to a week.

‘If the cake is for a customer and is going to be eaten I don’t leave them longer than three days to decorate as I want them to be as fresh and delicious as possible. All the cakes are baked to order so it can be time consuming.

‘I love animals more than anything, I have always been fascinated with them and love to challenge myself to capture a realistic look, as well as making things cute and funny where I can’.

Molly, who is the daughter of actor Ted Robbins, added she produces a lot of cake replicas of her customer’s cats and dogs. She sometimes then receives photographs of her creation alongside the animal in question. 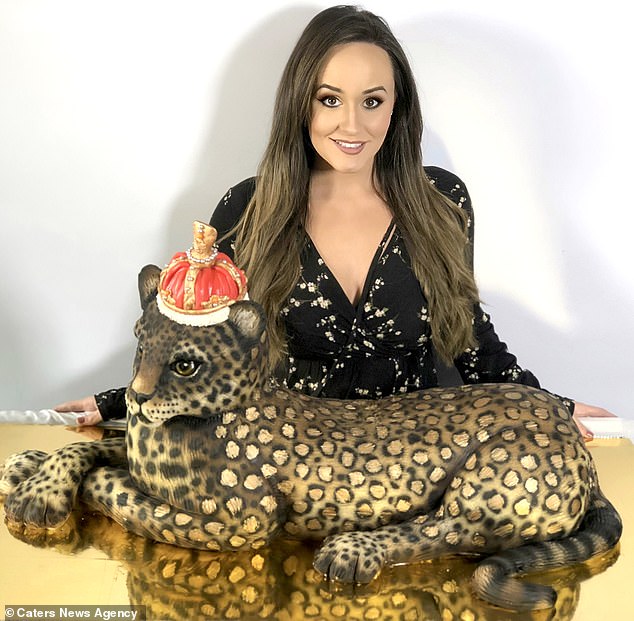 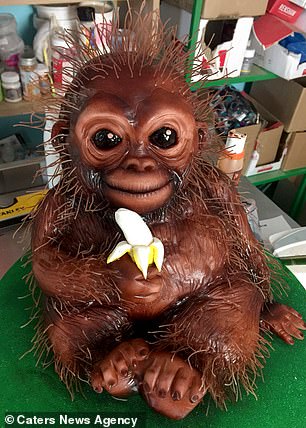 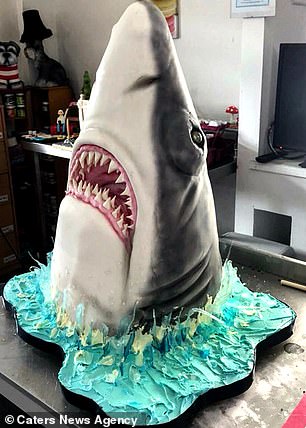 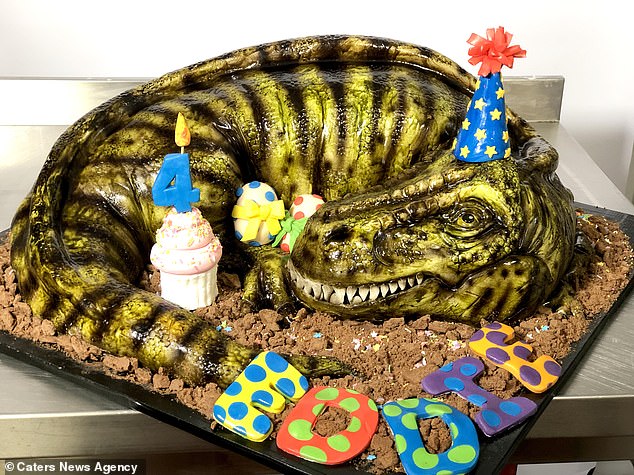 Another realistic cake was created in the shape of a crocodile, with a small cupcake by its tail in celebration of a fourth birthday

‘I make a lot of dogs and cats, customers usually send photos of their pets and I try and capture them in cake and icing’, she said.

‘My favourite response is when customers send photos of their real life dogs looking at their replica cake dogs.

‘They sometimes growl and bark at them which is funny. Sometimes customers cry happy tears but I can’t say I enjoy that’.

The make-up artist, who shares her creations on Instagram and appears on Channel 4’s Extreme Cake Makers, has also received some odd requests in the past – which she opted to turn down. 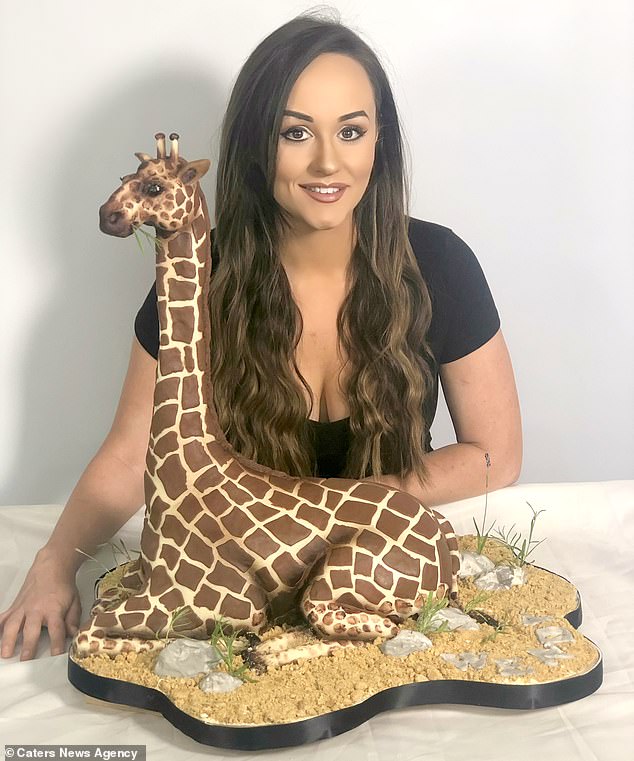 Molly, who is the daughter of actor Ted Robbins, added she produces a lot of cake replicas of her customer’s cats and dogs 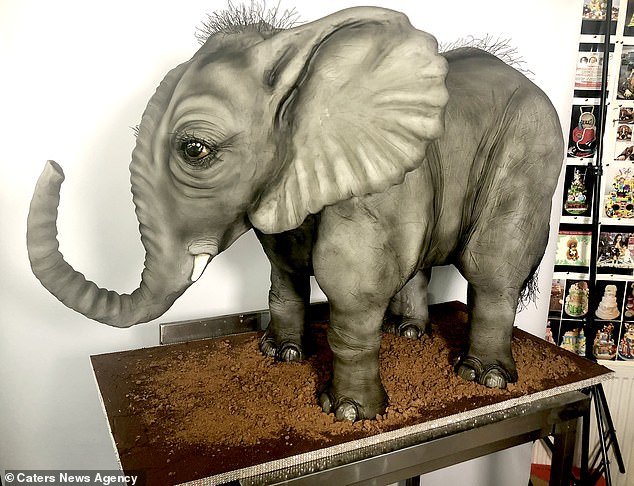 She added that the creations can take between an hour and a week to create, depending on the complexity of the request 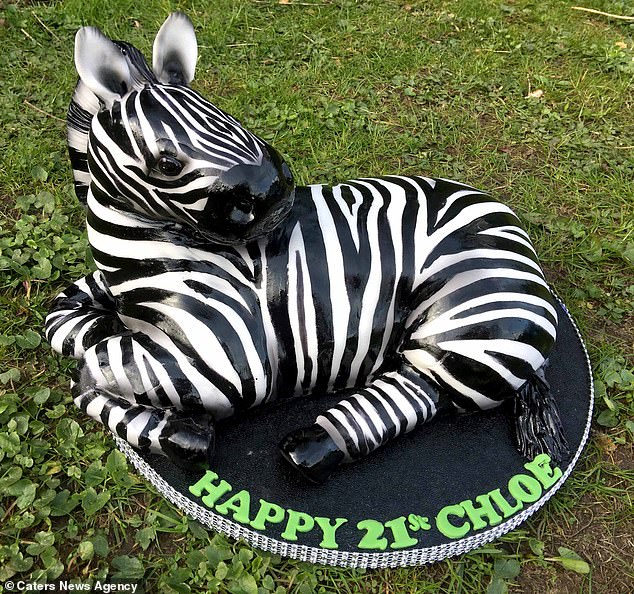 Pictured: A large cake sculpted into the shape of a zebra lying down Molly created for a 21st birthday party

‘I get asked to make all sorts, probably the strangest was a man I didn’t know who wanted me to make a life-size replica of myself so he could eat me. Safe to say I didn’t reply to that one’, she said.

‘I teach classes a few times a year, where the students are often professional cake makers, but we also have a few complete beginners there too.

‘I love teaching, I like to think that if things are broken down enough then everyone can make something amazing.’