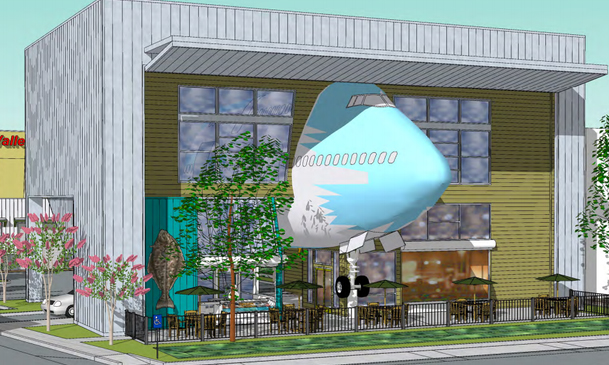 The proposed design of a Sacramento restaurant has raised eyebrows because of its location just a block from one of California’s worst aviation tragedies.

Architect’s sketches of the seafood restaurant show the nose of a Boeing 737 protruding from its facade, TV station KOVR reported.

Almost 50 years ago, a jet taking off from an air show slammed into Farrell’s Ice Cream Parlour, killing 12 children and 10 adults.

The new restaurant is to be built at 5936 Freeport Boulevard, now a vacant lot across from the Sacramento Executive Airport, south of downtown.

The site of the Farrell’s, a block away, is now the Freeport Square retail/office complex.

On Sept. 24, 1972, the restaurant had been hosting a party for a youth football team when a Canadair Sabre jet taking off from the Golden West Sport Aviation Air Show failed to gain altitude, smashed through a chain-link fence, burst into flame and skidded across Freeport Boulevard into the restaurant.

Get Morning Report and other email newsletters

Analyst: Eating out soon more expensive in Estonia than in Munich – ERR News