The New French Bakery is closing its retail store at 26th and 26th.
Hillary Oppmann of the Seward Civic and Commerce Association says, “The good news is the business itself is not closing, just the retail outlet. The company will continue to make their frozen breads for sale (and keep those jobs in the neighborhood). It’s too bad to lose all their delicious fresh breads, though!” 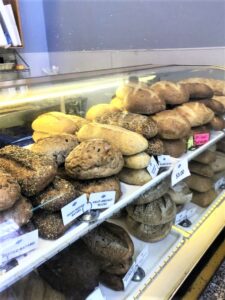 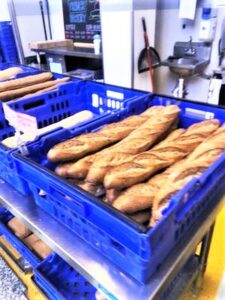 Forty years ago, Peter Kelsey was a college dropout and busboy at the New French Café. Sam and Sylvia Kaplan began the New French Café in 1977 as a hipster bar and café in the warehouse district downtown. They wanted authentic croissants and baguettes, so they rented the shop next door to the café and partnered with their busboy to start the New French Bakery. Peter eventually bought them out and started making desserts and breads for a wider audience.
He built his wholesale operation into a $40 million a year business with 300 employees. Their frozen bread is available at Lunds, Target and Cub Foods, as well as Surdyks and The St. Paul Hotel.
Kelsey had a bout with cancer, which he won, and six years ago he sold the business to a Chicago-based equity firm for enough money to retire and send his kids to college.
Today, lots of bakers know the secret to making a good croissant and a good baguette, but if you want to taste the original pathfinder for Minneapolis, the Bodhissatva (the one who brings Buddha over the mountain) of bread, then you should make it over to the New French Bakery before it closes March 6.

Super easy 3-ingredient cakes anyone can make – Times of India