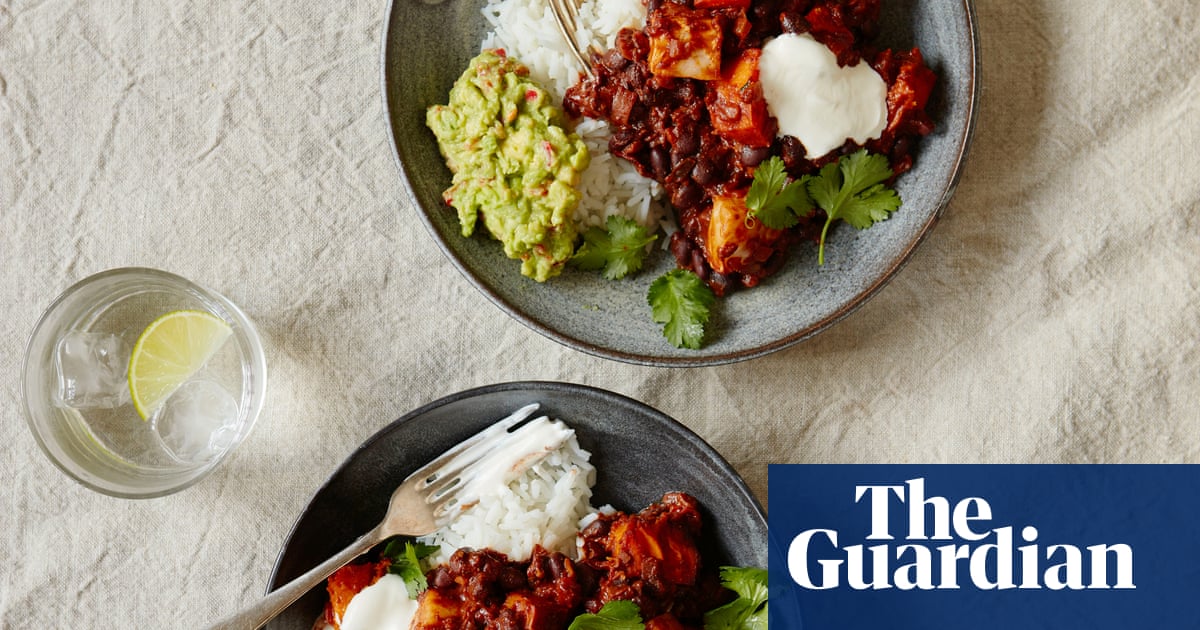 Towards the end of last year, a reader wrote in to request a chilli recipe for vegetarians. I thought it would be rather fitting for January, when there is a push to eat less meat, but most of us still need rich, comforting food to get through the cold evenings. Using different root vegetables builds layers of flavour in the chilli, so you might like to try carrots, parsnips and other roots, too.

For a party, serve the chilli with salsa, slaw, guacamole, chips and rice; for a quiet midweek dinner, strip it back to just soured cream and rice.

Heat the oven to 220C (200C fan)/gas 7. Put the squash and celeriac on a baking tray, drizzle over half the oil and season generously. Toss everything together with your hands, spread out and roast for 30-35 minutes, until the veg is tender, and crisp and golden around the edges.

Toast the dried chillies in a small, dry frying pan for a minute on both sides, then cover with boiling water and set aside. Meanwhile, pour the remaining oil into a large saucepan, add the onions and sweat over a medium heat for 10 minutes, until they begin to soften. Season generously, add the garlic and cook for another five to seven minutes.

Drain the chillies, chop them finely, add half to the onions, along with the spices and oregano. Fry for a minute, then add the beans, tomatoes, sugar and chocolate. Fill the tomato tin with hot water and add to the pan.

Bring to a boil, then simmer for 15 minutes until reduced. Stir in the roast vegetables and check the taste – if you want more spice, add the rest of the chillies. Simmer for another 15 minutes, until the sauce has thickened, check the seasoning, then sprinkle over the coriander and serve with guacamole, rice and soured cream.

And for the rest of the week

Consider doubling this recipe – it freezes beautifully and you will have a few suppers stashed in the freezer for nights you are too tired to cook. Cut batons from leftover celeriac with a shredding peeler to add to winter salads, and use leftover squash in velvety, warming soups.

4 Costco Bakery Items Customers Want in the Food Court | Eat This Not That – Eat This, Not That

What food is served for coronavirus patients at Gandhi Hospital? – Telangana Today