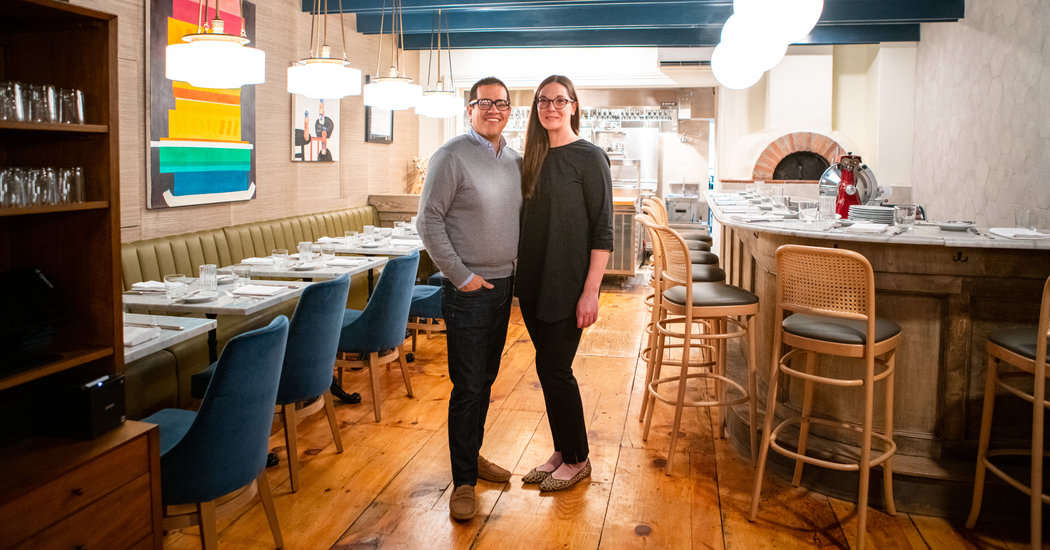 It’s a homecoming for Michael Toscano, the former executive chef of Perla. He moved to Charleston, S.C., in 2012, with his wife, Caitlin, and opened Le Farfalle. Now he’s back on Minetta Lane, in the former Perla space, where he will showcase his personal take on Italian fare. His wife is the manager. Mr. Toscano strides fearlessly into offal territory with grilled beef tongue, snout-to-tail soup, chicken liver pâté with beef cheeks, and veal head parmigiana, made by using the meat to make a terrine, which is then sliced, breaded and cooked parmigiana-style. “I had not seen anyone do this before,” he said. Several dishes are based on family recipes, like the fideos (angel hair) with skate and chiles. Appetizers include stewed chickpeas, and oysters roasted with crab fat. Baked skate wing, barbecued oxtail and a pork chop wrapped in pork belly are also on the menu. The 62-seat room with an open kitchen is at once rustic and elegant, with bare wood and brick walls against marble, blue velvet, moss-green leather and Art Deco lights. (Opens Friday)

Hoyoung Kim, the former executive chef of the esteemed Korean restaurant Jungsik, in partnership with Hand Hospitality (Atomix, Her Name Is Han and others), is finally opening this much-delayed Korean restaurant, where he will serve a nine-course tasting menu featuring wood-fired items ($95). The opening date was to have been mid-November, but there were last-minute permit problems. They are still waiting for a liquor license. (Friday)

Soy sauce ramen, or shoyu ramen, a specialty of the Niigata Prefecture north of Tokyo, is the featured dish here, one of several that combine Japanese and Chinese recipes. (The noodles originally came from China.) The restaurant, with 52 seats, also serves small plates like Sichuan peppercorn edamame, spicy Sichuan-braised Miyazaki beef, and mapo ramen made with thin noodles and an extra-thick spicy tofu and pork topping. Sanpoutei is owned by Sanpou Group, a Japanese company, and has more than 50 locations in Japan, Singapore and Canada. (Thursday)

Amelie Kang, the owner of the MaLa Project restaurants, and Yina Huo are turning Tomorrow, their counter-service spot in the financial district, into this full-service but informal Chinese bistro. Ms. Huo, the chef, is still featuring crowd-pleasers like pot-stickers, mapo tofu, scallion pancakes, pork belly over rice, and spicy beef noodle soup.

Chefs on the Move

After several years at the Modern, where he was sous-chef, Mr. Poiarkoff has been named executive chef for the Union Square Hospitality Group’s Roman-style restaurants in the Redbury Hotel in NoMad. He will oversee Marta, Caffe Marchio and Vini e Fritti.

Mr. Telepan has left his position as executive chef of Oceana in Midtown Manhattan to work with Bon Appétit Management, which is taking over food service at the Metropolitan Museum of Art.

Mr. Tessler, the former sous-chef at Untitled at the Whitney Museum of American Art is now the executive chef of that restaurant, as well as of the upstairs Studio Cafe.

Anita Jaisinghani will close her modern Indian restaurant, cafe and bakery in NoMad on Tuesday. On Wednesday from noon on, she will hold a sale — she calls it a bazaar — of everything in the restaurant and then some. She will be based in the kitchen in her Houston restaurant.

This Venezuelan spot in the East Village has closed. There’s still an offshoot at Turnstyle Underground Market in the Columbus Circle subway station.

The lively Cuban-style bar and lounge from the Dead Rabbit team has closed. Despite the bar’s popularity, the location, on the second floor of the Pier A Harbor House in Battery Park, proved to be too challenging for the place to be economically viable, said Peter Poulakakos, an owner. He said he and the other owners hoped to relocate it.