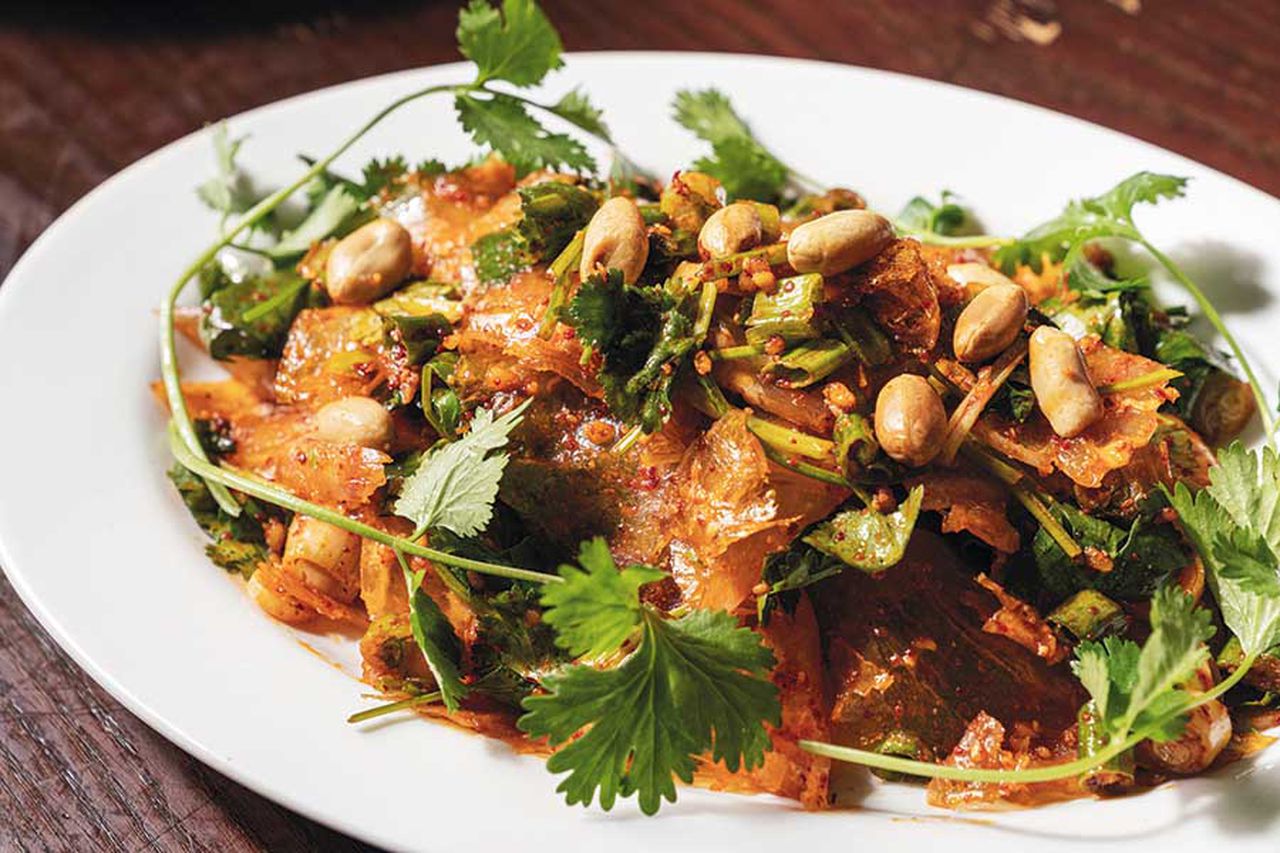 When visiting Red Pearl Restaurant, first take a detour to the seafood tanks in a corner of the adjoining Super Oriental Market. You may find gustatory inspiration among the swimming fish and lobsters; multiple types of live crabs, clams, scallops, shrimp, and other aquatic creatures; and even seasonal eel or bullfrog.

A nearby board lists specials that may seem exotic to some, such as yellow chive with blood pudding, and sautéed fish maw in pickled chili sauce. They’re a taste of home to the restaurant’s many Chinese customers.

Red Pearl has served traditional and regional Chinese fare longer than any other existing restaurant in town. Its menu includes several Americanized standards, but entices diners to stretch their culinary horizons.

Thanks to the market, the variety of fresh food at Red Pearl is stunning. Prices are reasonable—appetizers and soups are $1.19– $10.99 and most entrees cost $7.49 –$19.99, although market-priced seafood runs higher.

Weekends, when some customers drive from 2–3 hours away, are the busiest, says Linda Lin, the restaurant’s general manager.

Super Oriental Market, which specializes in groceries for cooking Chinese, Korean, and Japanese dishes at home, has been open for nearly 20 years. You may recognize it from the 2013 Birmingham episode of “Bizarre Foods America,” in which host Andrew Zimmern served Birmingham chef Chris Hastings beating bullfrog heart while they shopped for other comestibles.

Red Pearl, which opened in 2003, was inspired by frequent market-customer requests early on for cooking advice and recipes, Lin says. Over the years, its formerly modest seating moved from one side of the building to the other.

Under current owners Yi Lu Dong and Meimei Yu, Red Pearl underwent a major transformation in 2016. Seating in the newly elegant atmosphere ballooned from approximately 40 to some 200. The restaurant’s menu now features more than 200 dishes.

The best approach, Lin says, is to order several different entrees and sides for everyone to sample—such as steamed or fried whole snapper, sauteed snow pea leaves, Chinese broccoli, pork with fresh bamboo shoots, and jalapeño beef. Add an appetizer and soup for a deeply satisfying meal.

Appetizers start with eggrolls and dumplings—both steamed and pan fried—including “soup buns,” pork with gelatin that liquefies when steamed inside fluffy buns. Ginger-scented Steamed Shrimp Haukay, in a near-translucent wrapper made from starch, has become a personal favorite.

Soups are portioned for family-style sharing. Hot and Sour Soup is full of tofu, fresh (not canned) bamboo shoot, button mushroom, and egg. It skews more sour than spicy.

That treatment, one of Lin’s favorites, is especially good with squid and shrimp. Chinese and Vietnamese customers often order Salted Crispy Dragonfish, a snow-white Asian native sometimes known as creamfish that has soft, edible bones.

Also look for dishes with tofu noodles. Made with yam root and soybean curd, the sturdy noodles are scored along one side to help grip the sauce. An order with pork gains different dimensions of subtle spiciness from sliced jalapeño and chili-pepper oil.

Lin also favors Red Pearl’s lobster dishes—either covered in ginger and onion sauce, or served with dipping sauce. “I’m from the south of China, so I always like seafood,” she explains.

It’s easy to focus mainly on the seafood—Red Pearl offers more than four-dozen seafood dishes, including some that are seasonally available (eel, blue crab, geoduck). Year-round choices include lobster and Dungeness crab.

A baker’s-dozen selection of vegetable dishes includes simple sautes with green long beans, bean sprouts, spinach, or mushrooms. Others are more complex, such as peeled and steamed eggplant cooked in sweet-spicy garlic sauce. Tofu stars in another half-dozen vegetarian dishes.

With easy access to fresh seafood and exotic produce, Red Pearl proves that the best international restaurants often are attached to markets.