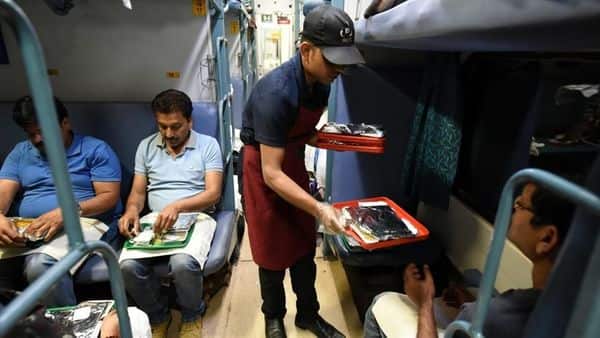 KOCHI :
Rail passengers from Kerala are a happy lot as the state’s traditional food items such as appam, eggcurry, puttu and kadala curry have found their way back to the revised menu of the Railways in the wake of protests over reports that they were replaced by north Indian delicacies.

The popular Kerala dishes were reinstated in the list following social media backlash over the Indian Railway Catering and Tourism Corporation’s reported decision to replace the favorite cuisine of Malayalis from its menu with north Indian dishes such as Kachori and Chole Bhature.

Ernakulam MP Hibi Eden, who had shot off a letter to Railway Minister Piyush Goyal raising the issue of alleged discrimination against Keralites, got an assurance from the IRCTC officials that popular items, including snacks such as unniyappam and sukhiyan will be served through its outlets in the state. Eden said the IRCTC officials who visited him at his home on Wednesday morning have presented him with the list of delicacies to be served by its local vendors in Kerala.

In his letter to the minister, the MP had stated that dishes which are very important to Malayalis for breakfast such as appam, egg curry, porotta, dosa, steam cake (puttu) were excluded along with snacks such as banana fry (pazham pori), kozhukkatta, unniyappam, neyyappam and sukhiyan.

He had also raised the issue of hike of price of food items. According to him, price of meals has been increased from ₹35 to 70 and that of snacks such as vada from ₹8 to 15. While the price of vada has not been reduced, the fare of snack meal like parotta, chappathi, idiyappam, appam and puttu with kadala curry or egg curry will be served at ₹50.

According to IRCTC, a passenger will have to shell out ₹20 for unniyappam/sukhiyan/neyyappam, 2 numbers each. Informing Goyal of the changes in menu, he said Malayalis are discriminated in trains and railway refreshment rooms by the food which is the right of every passenger. He had sought urgent intervention of the Minister and speedy action in the matter.