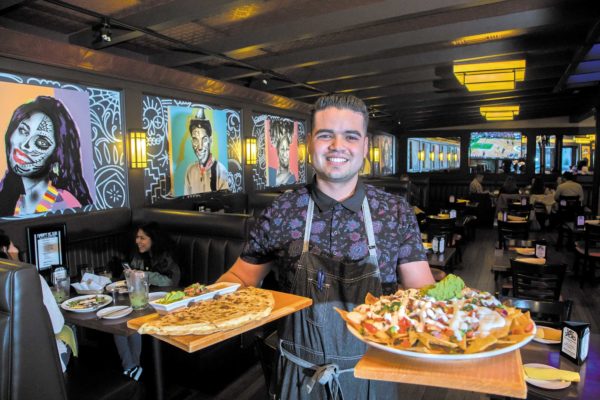 When I first heard about Kalaveras moving into Riviera Village, I wondered why they would name themselves after a county in Northern California famous for Mark Twain’s jumping frog. I still wondered that after seeing the decor, which included many pictures of Day of the Dead skull faces. The Internet revealed that both the restaurant and county share the Spanish word for “skull,” the county because of the large number of native burial grounds.

Suddenly the décor made sense, even if the restaurant didn’t when they first opened. Then the service was chaotic, food uneven, and many would-be customers were driven away by blastingly loud music. Locals remarked that the noisy party ambiance might work around the corner on Catalina, but would not fly on Avenue I.

The restaurant management got the message and dropped the volume. This was a good sign, so I decided to see if they had gotten the rest worked out, too. We stopped in on a quiet evening and were helped by a friendly server named Jonathan who brought chips and salsa. Since things were slow, he had time to make a few recommendations and explain the menu before taking drink orders. He mentioned that just about everything was served in large portions.

I wanted guacamole, so I asked whether the portion was more than two people would want as an appetizer (important because guac is too perishable to be good the next day). When he said that it was probably excessive for two, I asked for a half order, and he went to the kitchen to check.

In the meantime, the bartender brought over our drinks, a “Penicilina” and “Ultra Palabra,” both reinvented, old-school cocktails using mezcal instead of scotch or gin. In the penicillina the substitution of smoky mezcal for scotch worked perfectly, but that wasn’t the case with the Ultima Palabra. Gin has herbal notes that are very different from the simpler mezcal flavor. It wasn’t a bad drink, but there was a certain depth of flavor missing.

While we were sipping cocktails, Jonathan came back with a small bowl of guacamole, which he explained was not a half order, but a complementary taste since they couldn’t sell a half order. Having someone give us something when we were trying to buy it was a novel experience, and we were grateful. The guac was mild and tasted mainly of avocado and citrus, and since I prefer mine to have a little more zip to it, I double-dipped with the moderately spicy salsa.

Our plates arrived shortly afterward, and the entrees were gigantic. I ordered barbacoa, a stew that is made with beef rather than the more traditional lamb or goat. This had been braised in a savory but not particularly spicy broth until it was as tender as the best pot roast. The toppings of shredded pickled onions and scallions added flavor and texture, and I was happy even though it was milder than I would’ve gotten in a Mexican neighborhood joint. The fresh tortillas and a side salad added textures and flavors, and since I took almost half of it home, I also enjoyed them the next day.

My wife ordered a combo of a carnitas taco, chicken enchilada, and potato taquitos, which came with cilantro rice and beans. The carnitas was tender with a slightly crisp exterior, which is how I like it, and the green sauce on the enchilada had depth of flavor without being sharply hot. As for the potato taquitos, they were a blank canvas of softness wrapped in crunch, fine to dip in sauces. I prefer them with guacamole, but these came with crema and a sprinkling of Cotija cheese. Surprisingly, the cilantro rice was a standout, unusually fragrant and enjoyable with everything else.

We didn’t have room for dessert but resolved to try that next time. Dinner was just over 30 bucks each, and we liked it enough that we decided to come back on the weekend for their buffet brunch. That is an unusual decision for me, because I don’t generally like buffets much, preferring freshly made food. They have an omelette and waffle station with the standard American items, but we wanted Mexican, so focused on the offerings at the other end of the restaurant. These were minimally labeled without information about which items might be vegetarian, which we brought to the attention of a server. She agreed that this needed to be done and immediately started doing it, which we appreciated.

By unspoken agreement, my wife and I filled plates with different items and shared everything so we could try as many things as possible. It occurred to me as we did this that it is the inverse of the dinner experience at Kalaveras, where portions are so large that you have a whole lot of a few things.

The vegetarian sopes had a good flavor but were barely warm, which was also the case with both the cheese and pork tamales. This is probably due to the type of chafing dish used here, which has a large opening that lets heat out. You don’t have to juggle the lid while trying to serve yourself, but it does have this disadvantage. The pork ribs, which have more mass,  retained heat better, and were still nicely hot. They were tender and seasoned with mild spices rather than American barbecue rub, which made them something like carnitas on the bone. I would happily order them for dinner, because they’re much better than what was served when this was Chicago For Ribs. Some dipping sauce would have been welcome, but that’s a minor quibble. I tried one of the hot wings in the adjacent tray and found it quite zippy indeed, and might experiment with dipping the ribs in wing sauce to see how it worked out.

I was surprised to find I liked the chorizo and egg dish, which is usually just a platter of greasy paprika and garlic-laden eggs. Kalaveras uses high-quality, slightly coarse-grained sausage that is much better than the usual mushy version of chorizo. They earn high marks for this, because they used good ingredients where it counted. The only Mexican item that wasn’t to my taste were the chilaquiles, which had a sharp herbal flavor that neither of us could identify. Whatever it was, it didn’t hit my palate in the right spot. I cleared my palate with some of their ceviche, which was rich with seafood and had a nice balance of citrus and peppery heat.

We also tried the American items, sausage, bacon, potatoes, and French toast, all of which were decent but unremarkable. Other items on the buffet included menudo and chile rellenos, but we ran out of room before we got to those. It wasn’t until we were almost finished at the buffet that we realized there were no tortillas  — rather remarkable for a Mexican meal. We found out later they are available on request, and suggested posting a sign to that effect.

As we left a large birthday party was taking a nearby table, conversing cheerfully in Spanish, which usually marks approval from a community that counts. Brunch at Kalaveras ran $20, including beverage, and was a good chance to sample what they do. This place seems to have gotten over a rocky start, and we will come again for good and fairly authentic food in an enjoyable environment.