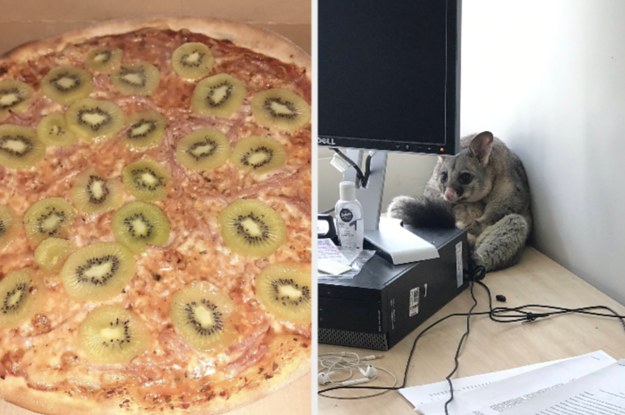 From the stories making headlines to what’s trending in pop culture, jump in our group chat and catch up on everything you might have missed this week. Watch new episodes of Did You See This? weekdays on Facebook Watch

A new pizza topping has divided the internet! Plus, Serena Williams is sticking up for her BFF Meghan Markle amid the ongoing royal family drama. Keep scrolling for full episodes on the stories that dominated our feed this week.

Would you try this Kiwi pizza?

Forget about pineapple, the new great pizza debate centers on kiwi! A photo on Reddit kicked off the latest online food fight, and even our group chat is split on the idea.

“I don’t know, maybe he’s a revolutionary! Because someone put an olive inside of a drink and now that’s a thing,” comedian Monroe Martin joked. “Don’t stop this man from being great.”

A research fellow in Australia opened her office on Monday to find it completely trashed, but no jury would convict the fuzzy little culprit. The adorable new officemate, identified as a common Australian brushtail possum, was eventually cared for and relocated out of the building.

“It’s only job is to be cute and honestly, give it a raise,” comedian Leah Bonnema told the chat.

Everyone seems to want to know more about Prince Harry and Meghan Markle as they get settled in Canada following their step back from royal duties, but Markle’s friends aren’t telling! Tennis superstar Serena Williams shut down any questions about her royal pal when asked at the Australian Open this week.

“One thing you do not do is challenge someone’s friendship,” BuzzFeed writer Jamé Jackson explained. “That’s how I feel about Meghan — but my best friend would be Megan Thee Stallion.”

The “weird” dog that stole our hearts!

This dog was given up for looking “weird,” but the internet thinks she’s perfect! After a photo of Jubilee went viral on Facebook, the shelter that took her in was inundated with adoption applications and Jubilee found her forever home!

The first details of the Hunger Games prequel are dividing fans…

After Entertainment Weekly published the first excerpt from the new Hunger Games prequel, fans of the franchise are split over the decision to focus the story on President Snow — the villain of the original series.

“Look we already got the backstory of an evil character. Hello, Joker,” comedian Anna Roisman told the chat. “Do we really need the prequel to the Hunger Games about, you know, this young, privileged white boy who’s just gonna turn evil some day?”

Catch new episodes of Did You See This? every weekday on Facebook Watch.