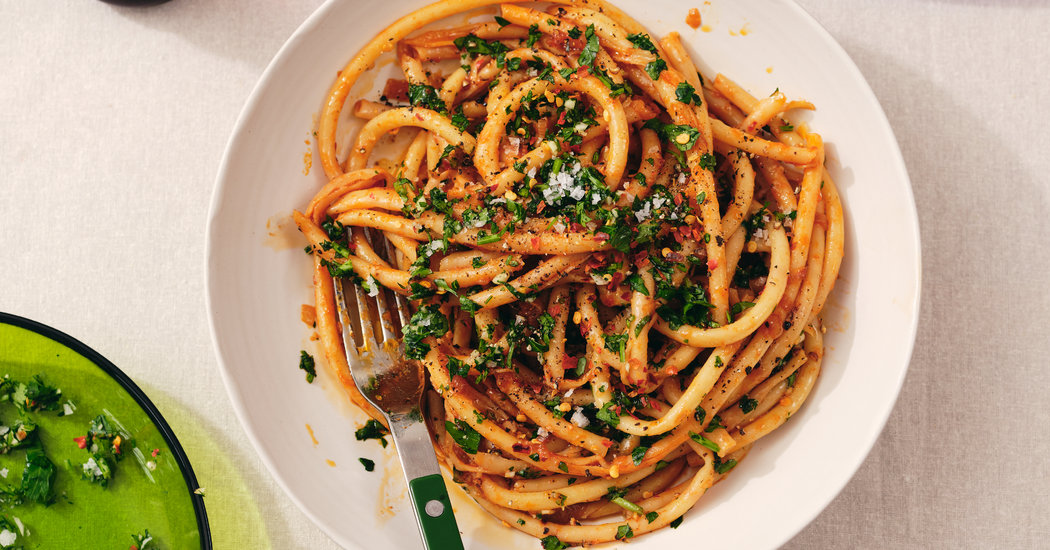 As a general rule, I don’t take requests for recipes — not at home when I’m cooking for others, and not for this column. Sure, the temptation to give people exactly what they want is always there, but ultimately I’m not sure that does anyone any favors. If I just wrote recipes by request, this would be a column of strictly chickpea stews and sheet-pan chicken (not that there’s anything wrong with that!). I’m sorry if that sounds harsh.

But there are exceptions, and this is a story about an exception.

Every Christmas Eve, my friends and I gather for a bacchanalian celebration, including anyone who sticks around for the holidays. Last year, the theme was Feast of the Seven Fishes, but we were a bit ambitious and ended up with closer to 12 fishes (doesn’t quite have the same ring, does it?).

Each dish on the table was a bold, extremely fish-forward approach to the theme, so I wanted to have something that was more of a humble, mildly flavored, comforting, carby background dancer to the real stars of the show (fishes). I threw together a giant pot of caramelized shallot pasta, enhanced, of course, with plenty of anchovies — I am nothing if not loyal to a theme and my own personal brand. It was shockingly good for the modest and limited ingredients involved, better than it should be, honestly.

The sauce itself was made with an obscene amount of shallots, fried in a generous pool of olive oil until caramelized and delightfully golden brown, melted into a jammy pile. I also added a few slivers of garlic to be toasted with the shallots; a whole tin of anchovies for meatiness, saltiness and thematic consistency; a bit of red pepper for spiciness and an entire tube of tomato paste that caramelized in the oil for sweetness and tanginess.

The end result was a deeply savory, very sticky, fiery neon-orange paste that I quickly realized I wanted in my life all the time, pasta or not. I did want to coat pasta in it, but I also wanted to smear it onto thick, oily toast, spoon it over my fried eggs, or drag roasted chicken though it. I wanted it in a jar kept in my fridge forever.

Reader, everyone requested this recipe, which, no, doesn’t happen each time I cook, thank you very much. There were emails and texts from those who had eaten it, direct messages and comments on the internet from those who had seen it. I felt shy about revealing how simple it was, like I had tricked everyone into thinking I was more creative than I was (it’s called impostor syndrome, look it up), but I ultimately felt that the shallot mixture itself was delicious and useful enough to warrant a real-life recipe. I wrote it down and fell even more in love with its simplicity.

So for those who wanted it, here you go. For those who didn’t know they wanted it: I promise, you do, and in this instance, I am happy to oblige.