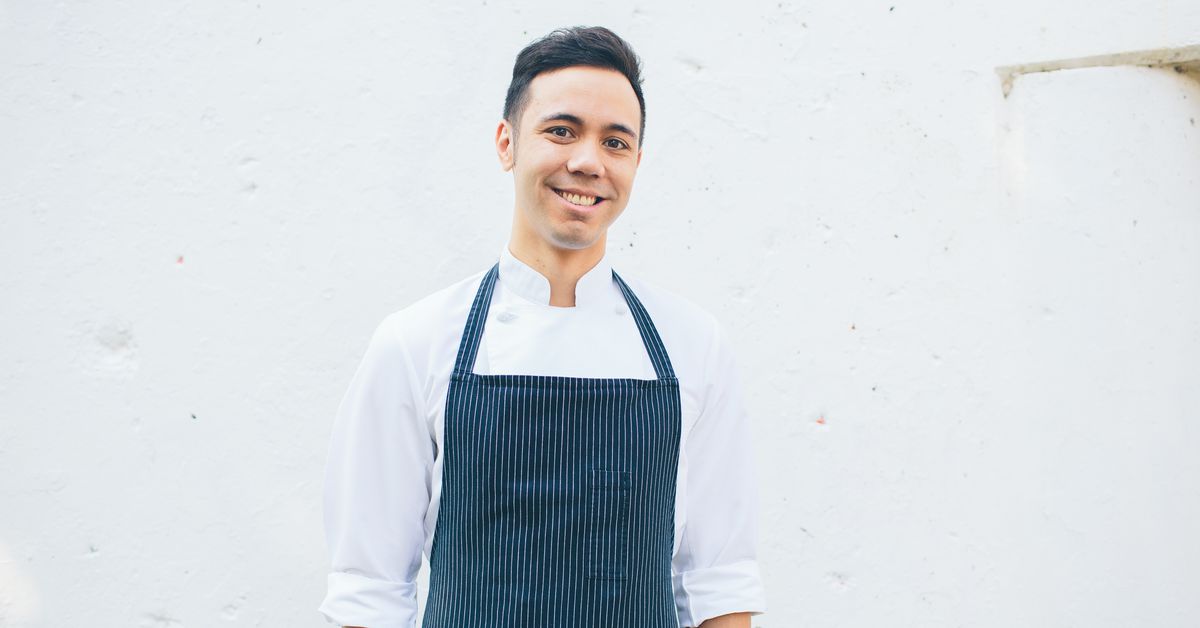 The chef behind S.K.Y. in Pilsen is preparing to open his second restaurant. Stephen Gillanders homaged his wife’s initials at S.K.Y., now he’s honoring his grandmother’s name with Apolonia, scheduled to open in early fall in South Loop. He and his staff will focus on European-Mediterranean cuisine.

The 100-seater is at 2201 S. Michigan Avenue, near McCormick Place and Wintrust Arena. It’s on the ground floor of a tri-branded Hilton Hotel that opened in 2018. That property’s food and beverage options already include Fatpour Tap Works, Starbucks, and VU Rooftop Bar.

She’s the one who taught him how to cook, and at Apolonia, he’ll explore more of the European techniques that have become many of the foundations of modern cooking. Chicago has seen a surge of Mediterranean restaurants — Gillanders pointed to Galit in Lincoln Park, Pacific Standard Time in River North, and Aba in Fulton Market.

“Those places all have hummus, pitas on the menu, but everyone seems to ignore the European side of the Mediterranean,” Gillanders said. “The Spanish, Italian, France part, the parts I’m completely in love with.”

Like Kostali, the recently opened downtown restaurant from chef Carrie Nahabedian, Gillanders wants to concentrate on seafood and coastal cuisines. The rustic, European menu will include dishes like wood-grilled Spanish octopus with chickpeas and a smoked pimento emulsion; whole-roasted prawns with romesco sauce and shaved fennel; and strozzapreti al sugo with smoked tomatoes and pork neck sausage.

S.K.Y., which opened in 2017, carries a friendly vibe where customers can dress up or just stop by for a casual bite. Gillanders wants the same for Apolonia. When S.K.Y. debuted, he intended for it to have more of a global menu, but customers gravitated to Chinese- and Korean-influenced dishes like lobster dumplings and bimbimbop. Gillanders, like any smart entrepreneur, listened and embraced that with new Asian dishes such as a decadent pork chop katsu.

“People tell you what your signature dishes are, they pick those — you don’t get to pick them,” Gillanders said. “They picked the Asian dishes.”

While Gillanders enjoys cooking those Asian items, he felt sold short. He worked with famed chef Jean-Georges Vongerichten and opened dozens of restaurants that serve different cuisines. Apolonia will give him and his staff a chance to show off more of their culinary prowess. For example, executive pastry chef Tatum Sinclair won’t be hamstrung by needing to use green tea in one of her desserts.

“That’s fine, if that’s what you guys want, that’s what we’ll give you,” Gillanders said. “But moving forward, I don’t want to be known as the ‘Asian Food Guy.’ There’s nothing wrong with that, in my experience, but we can do more.”

The space will feature an open kitchen, and at 5,200 square feet, it’s roomier than S.K.Y.’s 2,700 square feet. There’s no chef’s counter or immediate plans for a tasting menu, something the Pilsen restaurant serves. Gillanders said he may add that in the future.

Gillanders has been traveling and is in South Korea until next week. He had planned to travel to Hong Kong, but the outbreak of the coronavirus in China altered his travel plans. He teased the restaurant’s opening in November and wanted to sign his lease before the trip, but it took time. The official opening timeline is for the fall, but it could debut earlier. Gillanders is cautious as he saw surprises when opening S.K.Y. inside a 110-year-old building. Apolonia is new construction, so hopefully the process goes smoothly.

Many S.K.Y. customers live in the South Loop, Gillanders said, and besides Acadia, a two-Michelin-starred restaurant, there aren’t a lot of upscale options nearby. He hopes to fill the void. Apolonia gives South Loop another burst of good dining news with Harbor and MingHin Cuisine’s openings earlier in January.

Gillanders feels he owes Chicago for its support. When he arrived in 2016 to open Lettuce Entertain You Enterprises’s Intro Chicago, he imagined returning to Los Angeles to open S.K.Y., but now he wants to “double down on Chicago.” At the same time, Gillanders doesn’t aspire to morph into a large restaurant group. He may open more spots, but he wants to concentrate on a few and make them exceptional, carrying the same fun atmosphere throughout.

“We just want to be a couple people who own a couple of restaurants and work in them,” he said.

Restaurant etiquette debate: Should you add a tip when you order takeout food? – Yahoo Finance