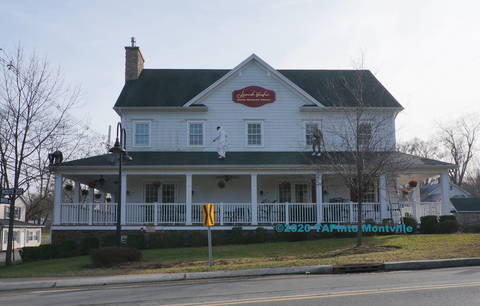 MONTVILLE, NJ — Ever since TAPinto Montville broke the news of the new owner of the former Montville Inn, Michael Cetrulo’s vision for his new restaurant Locanda Vecchia last June, food-lovers have been asking, “When is it going to open?” Locals are salivating to make reservations for Montville’s newest restaurant, which will be a sister to Cetrulo’s others, which include Scalini Fedeli in Chatham, Madison’s Il Mondo Vecchio and Montclair’s Scala del Nonna.

But what Cetrulo predicted back in June would be a cosmetic re-do of the dining room turned into a “total gut job,” he told TAPinto Montville recently, so renovations have taken longer than expected.

You have successfully signed up for the TAPinto NJ Flavor Newsletter.

“I wanted to replicate the vaulted ceilings we have in our other restaurants, and we used Venetian plaster treatments on the walls for an authentic look,” he said. “Then we used Rosso Levanto marble on the pillars and bar top.”

Cetrulo gave more details on the menu, saying it will have 12 to 14 entrées, with some traditional and some modern Italian, and maybe even a little French.

“People who are ‘foodies’ may see something a little different like crudo, which is Italian sushi,” he said. “People in this area may not have seen that.”

He will serve “appetizer pastas,” 12 to 13 of them, something new for his restaurants, he said. He figures an average check to be about $55 for an appetizer, an entrée, and dessert or wine, before tip.

He wanted a more casual feel for this restaurant as well, so the waiters will wear aprons and shirts, he said, not the suits that they wear in his other restaurants.

As far as opening, the restaurant will be serving family and friends for a couple of weeks to work out the kinks, with an opening date for all customers of Feb. 18. This way the restaurant employees can be trained and ready for the opening, Cetrulo said. He didn’t want to hurry construction or the training process, he said.

It’s a formula Cetrulo has been following every time he and his partners — his sister and chefs from his restaurants — have been using for every restaurant opening, approximately every four to five years, and it’s definitely working.

“It’s exciting every time we open a new restaurant but stressful, too,” Cetrulo said. “But we’ve been blessed. Construction is not my forte, though. I can’t wait to get in the kitchen!”

Got a story you’d like to see on NJ Flavor? Email Jackie Lieberman at [email protected]