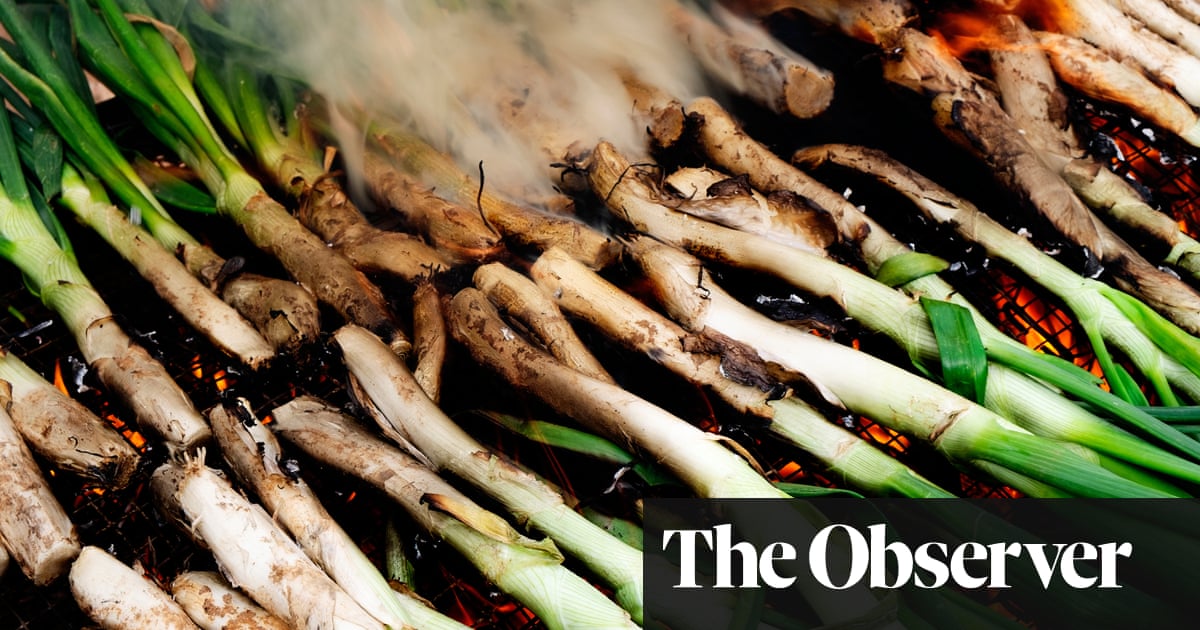 At a lovely restaurant called Levan in Peckham, south London – scene of my best (and hippest) Sunday lunch in years – a friend looked up from its brilliant menu and asked: “What are calçots?” Baffled as I often am by modish 21st-century ingredients, I knew the answer to this one. “They’re Spanish onions,” I said, probably a bit too eagerly. “A bit like spring onions, only fatter and longer. You grill them over charcoal, and dip them in romesco sauce.” That day, our order went on to include more than one plate of these onions. They looked, as they always do, slightly comical to me: like strange pagan dolls with overlong hair. But they tasted, as ever, really smoky and sweet and good.

When did calçots first start appearing on British menus? Afterwards, I thought about this. I think I first came across them about five years ago, but I can’t be sure. Fashions in food are like fashion itself. One day, no one is wearing Veja trainers; the next day, everyone is, at which point they become almost invisible. On seeing the word “yuzu” on the menu of the first restaurant I visited in California in 2005, I had to ask a waiter what it was (a citrus fruit popular in Japan and Korea). By the end of the week, however, the novelty had worn off; by that point, I would have been surprised to read a menu that didn’t feature yuzu. Before I sat down to write this, I Googled monk’s beard, the Italian green that is currently springing up all over menus, like weeds between pristine paving stones. It’s everywhere! Should you be a user of a certain posh delivery service, you can even add it to your supermarket order.

Some of these things – delicious, but whimsical too – hang about for a bit, and then disappear. Calçots are probably a keeper, but any minute now some chef is going to idly flick through Richard Mabey’s Food for Free and be seized by a desire for dock leaves, at which point monk’s beard will slope sadly away from the party – until, that is, the next time (what goes around comes around). What’s interesting to me, though, is the way that such trends – these ingredients are not staples; no one exactly needs them – wax and wane alongside deeper, more permanent shifts in the way we eat and drink. The real story lies not in calçots and monk’s beard but in, say, tracking over a period of decades the amount of meat consumed in the UK. Ditto pasta, or certain fruits and vegetables (avocados, up; swede, down).

Last month, for instance, the newspapers carried a story about tea, sparked by Unilever possibly selling its brands PG Tips and Liptons. In 1974, we drank an average of 23 cups of tea a week; today, we drink only eight, and fewer with every year that passes. This was genuinely revelatory to me, for all that I occasionally hang out in the kind of places that pass off thinly sliced beetroot as carpaccio. I love tea. I could not live without it. I find it comforting and reviving. I like all the things we’ve invented down the years to go with it – crumpets, teacakes, iced buns – and I struggle not to order a cup when I’m eating fish and chips, even in the evening. (If it’s lunchtime, I wouldn’t think of having anything else, which is normal in Whitby, but now slightly weird in Whitstable.)

What does all this make me? Writing it down, I feel a bit like a walking, talking PhD thesis. Everything I’ve described in this column connects, in ways that are both subtle and highly complex, to class, to place and to time (my age). This is one reason why I love reading and writing about food. But it also, as I get older, adds to the pleasure of eating. Every plate, every cup has meaning. I remember, as a child, watching my granny eat lasagne for the first time. In the moment, it was funny: her suspicion, and then her surprise (she liked it). These days, though, such a memory has more resonance, and not only because I miss her. Our cupboards and fridges, our restaurants and their menus: they tell us things about ourselves that we might sometimes be in danger of forgetting.

St. Louis bakery gives back by providing jobs to the homeless – KNWA

Embracing the vegetarian flair and flavor of sabzi – Houston Chronicle