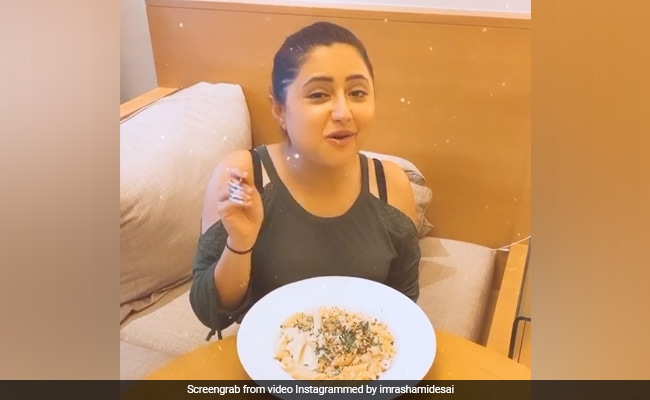 Riding high on the success of the recently concluded Bigg Boss Season 13, TV actress Rashami Desai has been making the most of her time outside the Bigg Boss house. Rashmi not only hung out with fellow Bigg Boss contestant and friend Asim Riaz post the finale but she also had her fill of creamy white sauce pasta. In an Instagram video posted by the ‘Uttaran’ actress, she can be seen relishing a bowl of pasta while saying ‘Chori kiya hua nai hai, mehnat ka hai..pasta‘. Rashami took a dig on the infamous pasta-stealing row that took place inside the Bigg Boss house this season.  Rashami, along with contestant Vishal Singh was accused of stealing items from luxury budget, which drew the ire of house captain and winner of Bigg Boss season 13 Sidharth Shukla. Rashami and Vishal were caught stealing pasta in the dark. The luxury budget was won by Sidharth and Paras’s team. Upon busting, the house was not only forced to return some contents won in the luxury budget, but the act also turned a big chunk of the house against the two and created tension between Sidharth, Rashami and Vishal.(Also Read: Sonam Kapoor Dons Chef Cap, Makes Vegan Tomato Soup And Garlic Bread Over The Weekend )Rashami Desai was one of the most talked-about contestants of Bigg Boss this season. Even though she got evicted from the house very close to the grand finale, she managed to win many fans during her stint. Actor Sidharth Shukla took the winner’s trophy home beating Asim Riaz. Comments