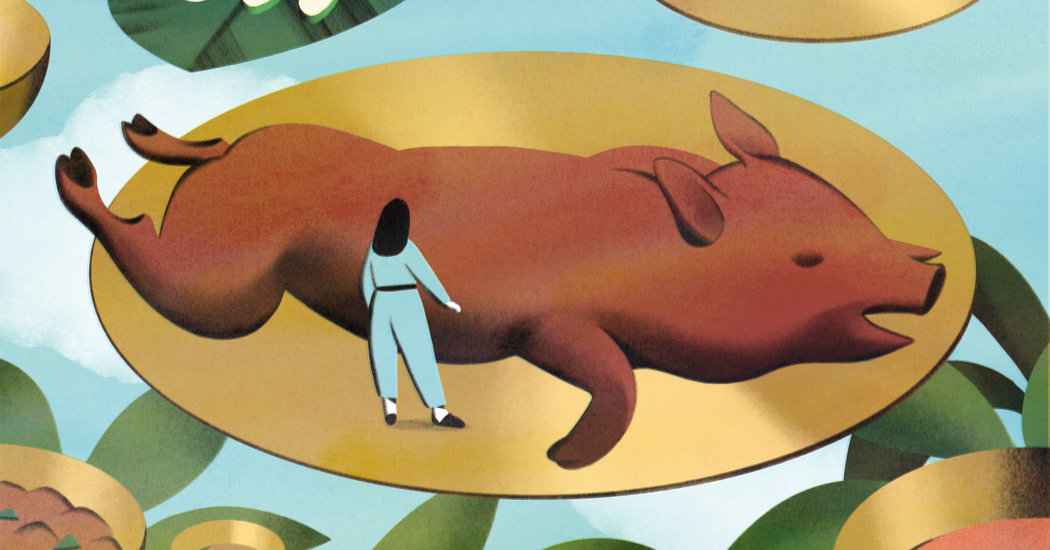 Are there foods that you eat with your family that you would feel uncomfortable eating with your friends?

In the Opinion essay “I Admire Vegetarians. It’s a Choice I Won’t Ever Make,” Alicia P.Q. Wittmeyer writes about how central meat is in her family’s culture, and therefore how difficult it would be to ever give it up. She writes:

Just before New Year’s, I posted a photo of a giant roast pig on Instagram.

I paused before I did it, and at first I wasn’t exactly sure why. I had the brief thought that by Western standards, the photo might be deemed a little graphic: The head of the pig was still attached, its cheeks sliced open. But that wasn’t really the source of my reluctance — we all know pork chops once had heads.

I was hesitating, I realized, simply because a giant roast pig is so ostentatious — so flagrantly, flauntingly meaty. And I felt uneasy because I was posting such a spectacle of meat at a time when many were making resolutions to not eat any meat at all.

I’ve recently watched so many people around me become vegetarians, or sometimes vegans. They are doing so for reasons — both moral and environmental — I understand and support. But I’ve been awed by the seeming casualness with which they make these decisions. I admire them and at the same time know that this choice is one I will almost certainly never make.

I felt this tension when I ate the pig. My mom had bought it — an expensive indulgence — for the end-of-chemo party she was throwing herself at the midway point of being treated for breast cancer. In southern Chinese culture — a sphere of which my Chinese Malaysian family is a part — whole roast pigs are brought out for special occasions: weddings, funerals, festivals. My mom can recall hauling one, not yet roasted, into the jungle each year on Tomb Sweeping Day to visit her grandfather’s grave. He’s buried in the jungle because he died there after his family fled their home during World War II.

I felt the same tension a week later when, after I’d returned home to London, I went with a newly vegan friend to the farmers market. She bought mushrooms and I, feeling slightly sheepish, bought chicken breasts that I wanted to use to make Malaysian chicken rice, which I did later that night, sending a picture of the results to my mom back in Kuala Lumpur, where she asked about the quality of the chili sauce.

And I’ve felt it in the weeks since, which I’ve spent on an unabashed — or rather, slightly abashed — Malaysian food kick, newly insistent on procuring wax duck and wax sausage for Lunar New Year even as I’ve stopped picking the options with meat in them at lunchtime fast-casual restaurants.

Later in the essay, Ms. Wittmeyer suggests that other people share her same concerns:

What I am saying is simply that I don’t think I’m alone in feeling this tension. Such feelings transcend race and ethnicity, but I happen to be part of a generation of Asian-Americans whose parents came over (and then, in some cases, went back) after the Immigration and Nationality Act of 1965. There is a whole cohort of people at this moment who are around my age, with parents who are getting older, who are having children of their own and contemplating what sort of relationship they’ll be able to offer these children to the distant countries their families are from, even as they contemplate what sort of future they can offer their children at all. Amid all this, food remains an important link in a connection that can sometimes feel tenuous. When I asked a friend about her New Year’s resolutions, she said one of them was to cook only Vietnamese food for the month of January.

In “The Omnivore’s Dilemma,” published in 2006, before the connection between diet and climate change had become so mainstream, Michael Pollan wrote about his reluctance to become fully vegetarian. To do so, he wrote, would mean losing something along the way that “I’m not prepared to dismiss as trivial”; that what seems like such a simple decision, to stop eating meat, has a way of alienating us from our histories and our traditions and the people around us. It is an unideal irony that the pull of these forces has become stronger for me even as combating climate change becomes ever more urgent.

The throughline to all of this, of course, is modernity. Modernity made our families this way, scattering them around the globe, leaving some of us feeling insecure in our roots. Modernity is why I must fly more than 6,500 miles to see my mom, leaving almost a ton of carbon dioxide behind each time I do. Modernity is why she can get first-class cancer treatment in Malaysia, at a specialist hospital where they brag about their radiotherapy machine. Modernity is why we can buy the roast pig; it is why we feel that we have to eat it, even if perhaps we should not, because not eating it would fundamentally change who we are.

Students, read the entire essay, then tell us:

Students 13 and older are invited to comment. All comments are moderated by the Learning Network staff, but please keep in mind that once your comment is accepted, it will be made public.

Eating Out: Alexander’s & Co, Holywood – Food that looks even better in real life than on TV – The Irish News