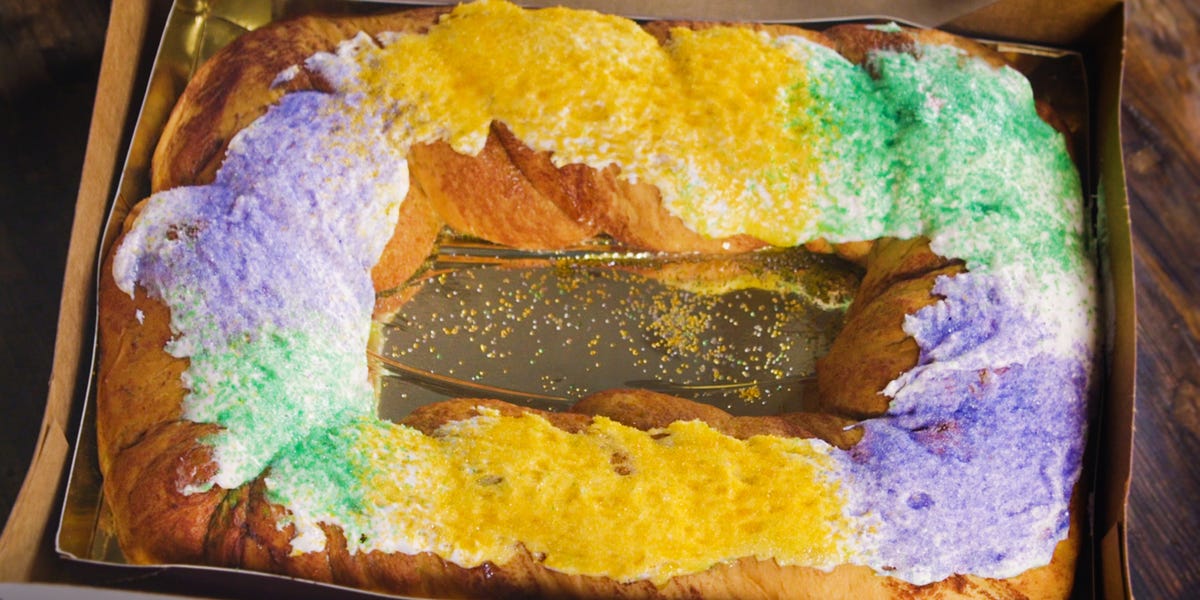 Following is a full transcript of this video.

– Every January, as the rest of the world settles down after the holidays, the city of New Orleans gears up for Mardi Gras. Carnival season is full of parades, balls, and its signature dish, king cake. And one of the most legendary king-cake bakeries in New Orleans is Gambino’s Bakery.

Customer: I have been coming to Gambino’s for 50 years at least.

Customer: I drove an hour and half just to get to Gambino’s to get one of their delicious king cakes.

Narrator: For several generations, Gambino’s has been baking king cakes for New Orleans and the rest of the world.

Jackie-Sue Scelfo: This is our 71st year in business, so we have a lot of experience. We have people that have been with us 40 years, 20 years.

Narrator: And the business of king cakes is big business. In addition to selling the cakes at their bakery, Gambino’s ships king cakes all over the world.

Johnny Davis: Doing a little… 700, 800 a day, you know. Which is a pretty good amount for a place being this size.

Jackie-Sue: We probably make about 100,000 during Carnival season.

Narrator: So, what exactly is a king cake, and how is it made in New Orleans?

Jackie-Sue: It’s a sweet Danish dough. There’s cinnamon in it, the traditional cinnamon. It’s made from scratch every day.

Johnny: So, we start out in the morning by making bread dough. We mix it, we chop it up on the table, and then we give it a moment to rest, then we start processing it. I think it derived from the cinnamon roll and it just expanded from there. Instead of making it a dough and cutting it all and making a little sweet roll, let’s stretch it out. Let’s stretch it out and make a loop out of it. I don’t know where it originated from, but this is what it ended up being.

Narrator: In NOLA, the cake fits right in with Mardi Gras tradition.

Jackie-Sue: So, it has the traditional three colors, the green, purple, and gold. And it’s faith, justice, and power.

Narrator: Generations of children have been raised in New Orleans eating cakes during Carnival season.

Customer: As soon as we get weaned off of the bottle. I mean, that’s pretty much, you know, the next thing to go in your hand. It just is. It just is.

Narrator: Sharing king cake was a tradition long before New Orleans became a city. The cake’s name comes from a biblical story of the three wise men visiting baby Jesus on the 12th night, or King’s Day, celebrated on January 6. Today, king cake is available between King’s Day and Mardi Gras day, the day before Lent begins. The origin of the king cake itself varies on who you ask but is most commonly believed to have started in France or Spain and was popularized during the Middle Ages. While king cake might not have been invented in New Orleans, bakeries across the city, like Gambino’s, have perfected it.

Jackie-Sue: There’s different parts of the world that celebrate Carnival, but they also have, you know, a version of the king cake. I think ours, you know, we have a lot of sugar in ours, so I think ours is sweeter. I don’t think when you go to Europe or even Mexico, it’s not as, they don’t have the icing and sugars on it.

Narrator: Gambino’s claim to fame was that they were one of the first bakeries to actually fill their cakes.

Narrator: The final and possibly most important ingredient in a king cake is a plastic baby baked into every cake.

Jackie-Sue: So, the baby originally, you know, was supposed to be, like, baby Jesus, but basically it symbolizes, like, health, prosperity, you know, you’re the king. It’s like the grand prize in the cake.

Narrator: Before the baby was popularized, many Mardi Gras krewes would hide a bean in their cake, and whoever ate the piece with the bean inside would be the king or queen for that year’s Mardi Gras parade. Today you can’t buy a king cake without a plastic baby.

Customer: I remember getting the baby a couple of times when I was a little kid, you know, at school. And it was like, oh, that was popularity gold. That was pretty cool.

Narrator: Tradition goes that whoever finds the baby has to provide the king cake for the next party. But after Hurricane Katrina devastated New Orleans, many bakeries, including Gambino’s, were not sure if they’d reopen.

Jackie-Sue: It was scary because you wonder if you’re… I think anybody that had a business here, was employed here, you didn’t know what your future was. So it was very frightening. Sorry. Everything was just really slow coming back, and nobody really knew really what was gonna happen. They city’s come back even stronger, you know, and better. And our people here are just, they’re so strong.

Narrator: In the years since the hurricane, Gambino’s popularity has grown stronger than ever. Some of the bakery’s most loyal customers are former New Orleans residents who didn’t come back to the city after Katrina, so they have Gambino’s king cakes shipped to them wherever they are in the world.

Jackie-Sue: You have to live every day to the fullest, ’cause we just don’t know what’s gonna happen, and I think that’s why we celebrate so big here. I think that’s what makes this place so unique to anywhere else because we just have this, you know, joie de vivre that we love life and we love our culture and we just want it to keep going. And it’s just kinda something to bring people together for, you know, a celebration, which we like to do in New Orleans.

What do vegetarians eat on I’m A Celebrity? – The Sun

Looking at LDCs, food and COVID-19 – Trade for Development News